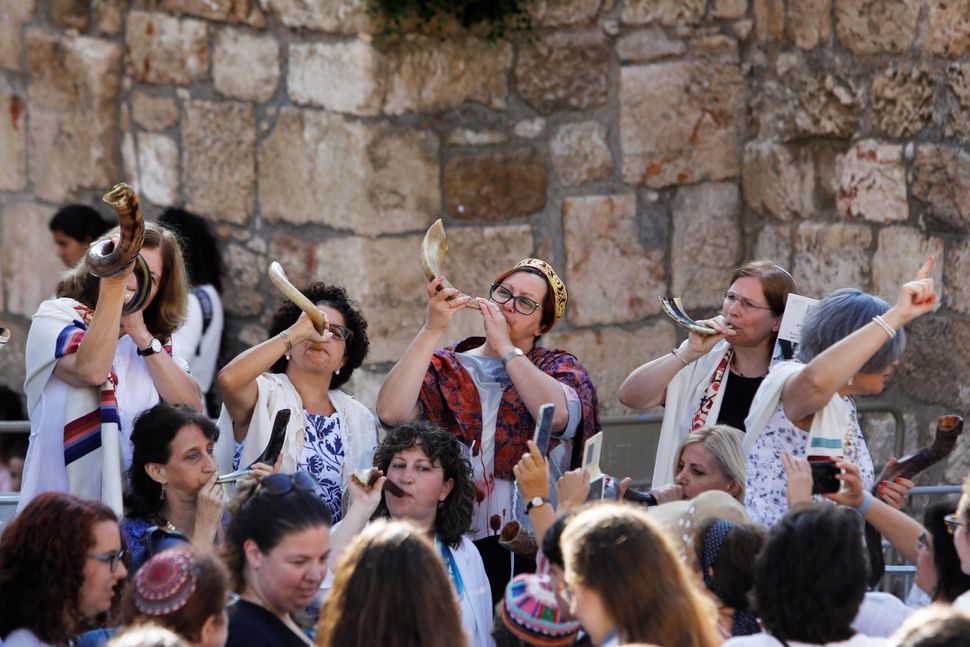 “It would be excessive for American liberal leaders to demand even 1% of the space at the Kotel afforded to traditional Jews,” the group wrote in a position paper distributed to the media, using the Hebrew term for the Western Wall.

While today only 10% of American Jews self-identify as Orthodox, a category that includes both the strictly traditional ultra-Orthodox groups and more open Modern Orthodox Jews, their numbers are growing fast. The trip was their latest effort to make a claim for American ultra-Orthodoxy’s political might.

The ultra-Orthodox advocacy group Agudath Israel of America organized the mission, which it called Am Echad, or “one people” in Hebrew. In interviews, Agudah leaders described the effort as simply a request for a seat at the table with Israeli leaders. But in printed materials, the group took a much harder line, lashing out at their non-Orthodox coreligionists.

The aggressive rhetoric on the part of the ultra-Orthodox groups, whose communal institutions and charity networks rely in many cases on mainstream Jewish donors, risks inflaming already heightened tensions between ultra-Orthodox and non-Orthothox Jewish communities in the U.S.

“I am saddened that they are launching such a campaign,” said Rabbi Steven Wernick, CEO of the United Synagogue for Conservative Judaism, an umbrella organization for Conservative Jewish synagogues. “It’s simply not good for the Jews.”

The trip, which ran from February 26 to 27, comes amid years of unusual protest by mainstream American Jewish institutions against Israeli government policies that favor Orthodox religious practice, particularly at the country’s Jewish holy sites. Organizations that virtually never criticize Israel’s actions, including the Jewish Federations of North America and the American Jewish Committee, have spoken in recent months against various aspects of the Israeli government’s plodding process on allowing space for non-Orthodox prayer at the Western Wall.

The prayer site at the Western Wall is currently controlled by ultra-Orthodox religious authorities who insist on separation between men and women, and bar women from engaging in religious rituals like reading from the Torah scrolls. Reform Jewish activists regularly attempt to pray there, in some cases facing violence from police and bystanders. The government is moving forward with some plans to allow egalitarian prayer, while backtracking on others.

Ultra-Orthodox leaders have felt that the unified advocacy for egalitarian prayer at the Western Wall from American Jewish groups marginalized them. “There is somewhat of a misleading tone to some of the representations that were being made over the last year or two by American Jewish establishment groups,” said Rabbi Dovid Zwiebel, Agudah’s executive vice president. “About how this is going to destroy relations with Diaspora Jewry and [they] speak on the behalf of American Jewry… We certainly are quite upset and have been quite upset about those things.”

In their position paper, the Agudah characterizes the Western Wall protests as “disturbances” and links the protest leaders to “anti-Israel forces.” It uses research by non-Orthodox Jewish scholars, among others, to argue that the non-Orthodox world is in decline, and that the Israeli government should instead build relations with the ultra-Orthodox. The paper cites the 2013 study by the Pew Research Center on the American Jewish population, alongside other work.

“Although the Orthodox community is demonstrably the most vibrant segment of American Jewry and is poised to become its face, non-Orthodox leaders deceptively present themselves as the representatives of ‘American Jewry,’ overstating both their numbers and their relevance,” the position paper reads. “Israel and its holiest sites are being used as a last-ditch attempt to rescue dying American non-Orthodox movements.”

Other Am Echad materials claim that ultra-Orthodox Jews send hundreds of millions of dollars a year to Israel, citing estimates that include $1,600 per year for laundry for each American yeshiva student studying in Israel, $28 per ultra-Orthodox family that travels to Israel for the holiday of Sukkot and then goes to visit relatives in the West Bank settlement of Beitar Illit, or $55 for the same traveling family eating at a bagel shop.

In interviews, Agudah leaders said that they were simply trying to have their voices heard. “The conversation is about having a place at the table, letting them know there’s a strong and growing Orthodox community in New York and that the Reform and Conservative movements and the [Jewish federations] don’t represent our view, and we deserve a seat at the table also,” said Leon Goldenberg, a member of Agudath Israel’s board of trustees.

Yet their rhetoric rubbed at least some non-Orthodox leaders wrong. “I think it’s a gross misreading of the data and of Jewish history to think that 90% of the Jewish world is just simply going to disappear and that the only Judaism that’s going to remain is an ultra-Orthodox Judaism,” Wernick said. “This type of campaign is designed to exclude and dismiss. I think those that do so do so at their peril.”

During their two-day trip, the Am Echad delegation met briefly with the embattled Israeli prime minister Benjamin Netanyahu, plus a number of cabinet ministers, including finance minister Moshe Khalon and justice minister Ayelet Shaked. Israeli president Rueven Rivlin also met with the group.

“The intensive lobbying has at least opened the leading Israeli officials to listen to our side of the story,” Agudah board chair Shlomo Werdiger told the Orthodox newspaper Hamodia on the last day of the mission. “Of course we can’t expect instant results, but the fact that they were willing to hear us out, that in itself is a major achievement.”