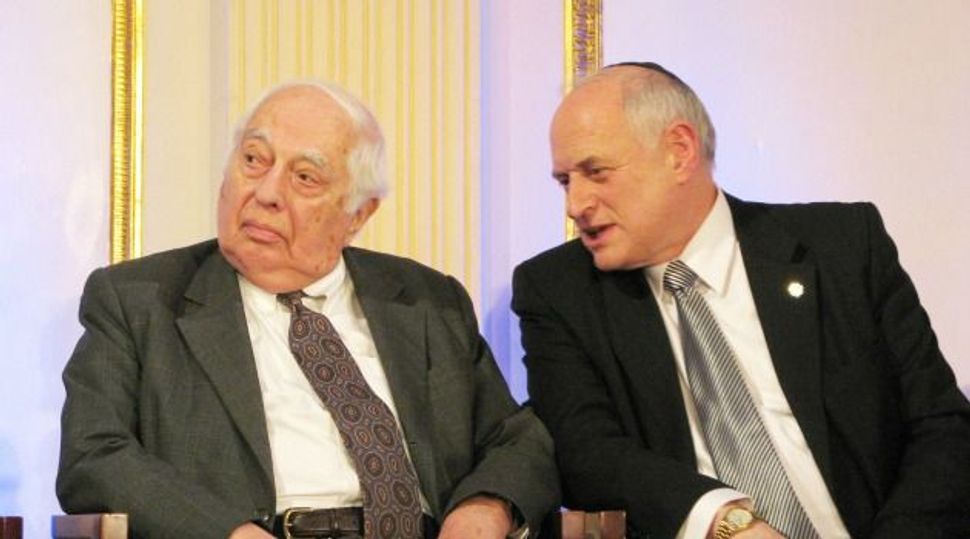 The announcement Tuesday that Malcolm Hoenlein was preparing to step down after three decades in one of the most powerful positions in the organized Jewish community took the leaders of his own organization by surprise.

In an internal memo, the Conference of Presidents of Major American Jewish Organizations told its members that the organization was beginning a “transition process,” but that Hoenlein would remain in his current role as president until he was replaced, and then continue to serve afterward in a new position.

The announcement surprised even members of the Presidents Conference’s executive committee, which oversees the organization. Though Hoenlein has been in his job for a generation and is past retirement age, he seemed an eternal fixture of the Jewish communal scene, unlikely to cede control of the organization he built.

“We’re all waiting to hear more,” said Cheryl Fishbein, a member of the executive committee and the chair of another Jewish group, the Jewish Council for Public Affairs.

The surprise and confusion in response to the Tuesday memo was so pervasive within the membership of the Presidents Conference that Hoenlein and the board chair, Stephen Greenberg, sent a second internal memo on Wednesday insisting that Hoenlein was “not stepping down,” and that the transition process would take “one to two years.”

Hoenlein has led the Presidents Conference since 1986. The organization, which convenes and at times speaks for roughly 50 U.S. Jewish groups, is among the most powerful voices in the American Jewish community, an elite gathering place for leaders of a range of mainstream Jewish groups. It is a place where the Jewish establishment consensus is formed.

Hoenlein’s position at the top of the organization has placed him among the most powerful and well-connected American Jewish leaders. He is also one of the best compensated. The Presidents Conference paid him $452,000 in 2016, according to the Forward’s salary survey.

The announcement of the leadership transition, sent at 4:30 p.m. on Tuesday, was the first that even top lay leaders at the Presidents Conference had heard of Hoenlein’s intentions. During the group’s annual Israel trip in mid-February, Hoenlein presided over high-level meetings between Israeli and American Jewish leaders.

“It was an amazing trip and he was wonderful and he was his usual self,” Fishbein said.

The group met with the Israeli prime minister, Benjamin Netanyahu, among other prominent Israelis. In social media content posted by the organization, Hoenlein appeared alongside Israeli military and political leaders.

The Israel trip ended on February 22. The announcement of Hoenlein’s decision to step back came five days later.

In their Wednesday memo, Hoenlein and Greenberg decried media coverage of the announcement, presumably referring to the JTA story that first reported that Hoenlein was stepping down. “We have received many inquiries expressions of concern and disbelief, and requests for clarification, stemming in part from misrepresentations and distortions of the memo…by some media sources,” the two men wrote.

Yet the new memo did little to clarify Hoenlein’s decision. The timing and details of the announcement remain vague. It appears that Hoenlein will remain as the leader of the Presidents Conference until a replacement is hired in one to two years, and that he will then remain on the organization’s staff indefinitely. The replacement will be responsible for “ongoing operations and activities,” while Hoenlein will “focus on external relations.” It’s not clear what that means, or which position would be more senior.

In the followup memo, Hoenlein and Greenberg wrote that “Malcolm initiated these discussions some months ago and we agreed that it was the proper responsible and forward thinking approach.” It’s unclear who the memo means by “we,” as the executive committee does not appear to have been consulted.

“While Malcolm and I have been discussing this for some time, we felt that as we begin the nomination process for the next chair of the conference, it would be the appropriate time to share Malcolm’s intentions,” Greenberg wrote in the first memo. “While Malcolm continues to be a uniquely vital and energetic leader, and an irreplaceable asset, he felt that a transition process should be put in place.”

The Presidents Conference includes legitimately major Jewish organizations, like the Anti-Defamation League, and far smaller ones, like the American Jewish Congress. It refused to admit the dovish pro-Israel group J Street in 2014.

This week the Presidents Conference also told members that it is also seeking to replace Greenberg, who has served three years as its lay chairman.