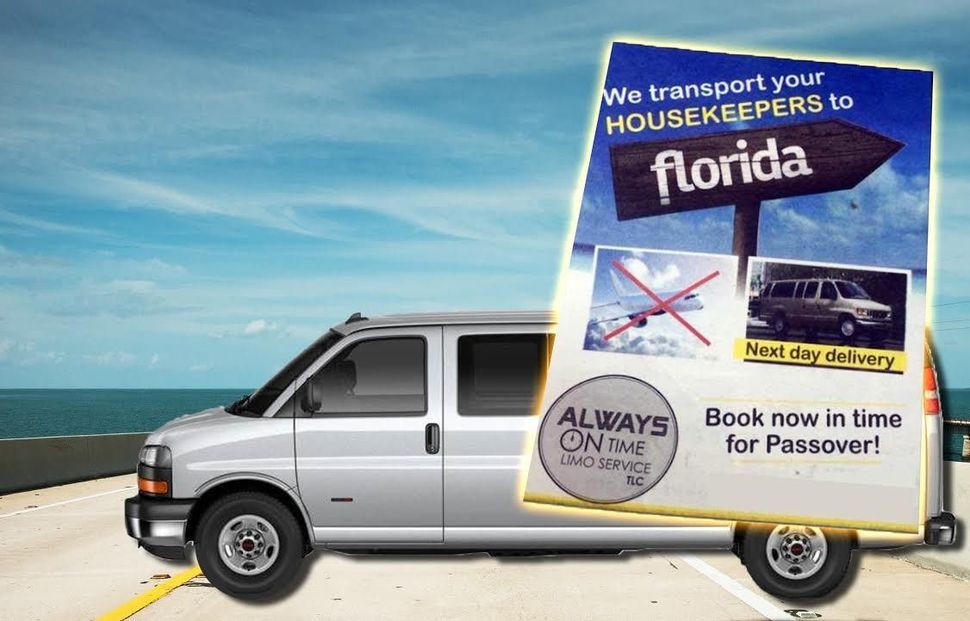 What do you do when you want to bring the housekeeper to your home in Florida for Passover, but she can’t fly because she is undocumented?

This is the conundrum that Israel, a private taxi driver, is here to help you solve. But it will cost you a chunk of change — and it comes with a serious moral dilemma.

Israel, who asked to be identified by only his first name, operates Always On Time Limo. It is a one-man operation that advertises “next-day delivery” of hired help from the New York area to a desired Florida address. The round-trip ticket costs $500 — roughly the cost of round-trip airfare from New York to Orlando or West Palm Beach airports around Passover.

While bringing a domestic worker on vacation helps make child care and cleaning the house more convenient, sending that person on a 20-hour van ride while you jet down may not feel quite right.

More important, it poses grave legal risks to both the undocumented women and the families that employee them — not to mention the chauffeur.

“It’s really chutzpah of the highest sense,” said Michael Wildes, a prominent immigration attorney and former federal prosecutor in New York. “Your vacation may be fouled up, but that person could be deported.”

Many Jewish households employ hired help every Passover to assist with the arduous task of cleaning the house top to bottom and searching for every remaining bit of hametz, or leavened bread. Some families skip this step and spend the weeklong holiday at a resort, where the kitchens are supervised by rabbis who specialize in the laws of kashrut.

But few in the Jewish community know about the risk other families will place themselves and their employees in to alleviate the stress of the holiday.

‘Anybody who comes into contact with this is at risk’

Israel is one of many Orthodox men — thousands, he guessed — who make their living chauffeuring ultra-religious Jews around Brooklyn neighborhoods like Williamsburg, Flatbush and Boro Park. “Jewish Uber,” he called it — part of New York City’s “shadow transit” network coordinated by various ethnic communities.

“I only deal with Jewish people,” said Israel, who also lives in Brooklyn.

Israel is wary about providing details about himself or his business. He declined to name his country of origin. He said that his clients are Orthodox Jews from all backgrounds who primarily live in Brooklyn, New Jersey and Long Island. He said that the domestic employees he drives — all women — have “no paperwork.” But Israel believes he has no legal liability in accepting cash payments to transport across several state lines women he knows are undocumented.

“When a driver has a passenger, he doesn’t ask them, ‘Are you a citizen?’ or whatever,” Israel told the Forward. “I’m not worried about doing something illegal. I’m not bringing drugs.”

But Wildes, who has defended the immigration status of first lady Melania Trump and her parents, says he is wrong.

It is one thing for undocumented immigrants to be transported around New York City, a sanctuary city. (Newark. New Jersey, home to an estimated 25,000 undocumented workers, is also a sanctuary city.) The New York Police Department has denied 1,500 requests received from U.S. Immigration and Customs Enforcement to detain immigrants since Donald Trump’s inauguration, and ICE agents must get consent before entering a private residence. As long as undocumented workers stay away from city transit hubs like bus stations and airports, risk of arrest and subsequent deportation is generally low.

But as soon as they leave New York, all bets are off. That is especially the case when a dozen or more undocumented workers are being chauffeured, in a rented van, down the busiest interstate corridor in the country — under a deadline.

“If somebody’s driving at a fast speed, they’re running the risk that they can be stopped and investigated by states that are less sympathetic than New York,” Wildes said.

If Israel’s van were pulled over, Wildes said, the result would be disastrous. It could lead to deportation of the undocumented women; criminal smuggling charges for Israel, and large fines — or worse — for the employers footing the bill. The rental van could be impounded.

“Anybody who comes into contact with this is at risk,” Wildes said.

The practice of shuttling domestic workers to Florida — and likely other vacation getaways — has been going on for many years. Some families send the workers ahead by bus or train. Wildes says he knows of wealthy families that bring their domestic workers on their private jets.

Of course, in recent years the issue of undocumented workers has become much more sensitive, and enforcement of immigration laws has become stricter, potentially raising the stakes for everyone involved.

Headline to email i just got: TRAVELING TO FLORIDA FOR INTERSESSION/ PASSOVER? I will drive your Housekeeper there in a beautiful Mercedes


But the service still remains shadowy for many corners of the Jewish world. Nachum Segal, a popular Orthodox disc jockey in New York, said he had never heard of the practice. When one of Israel’s ads made the rounds in Orthodox Facebook groups last week, it elicited significantly more outrage than it did sympathetic responses. In one private Facebook group, however, criticism centered more on the second-class nature of travel by shuttle bus than on the legal risks apparent for the driver and passengers. 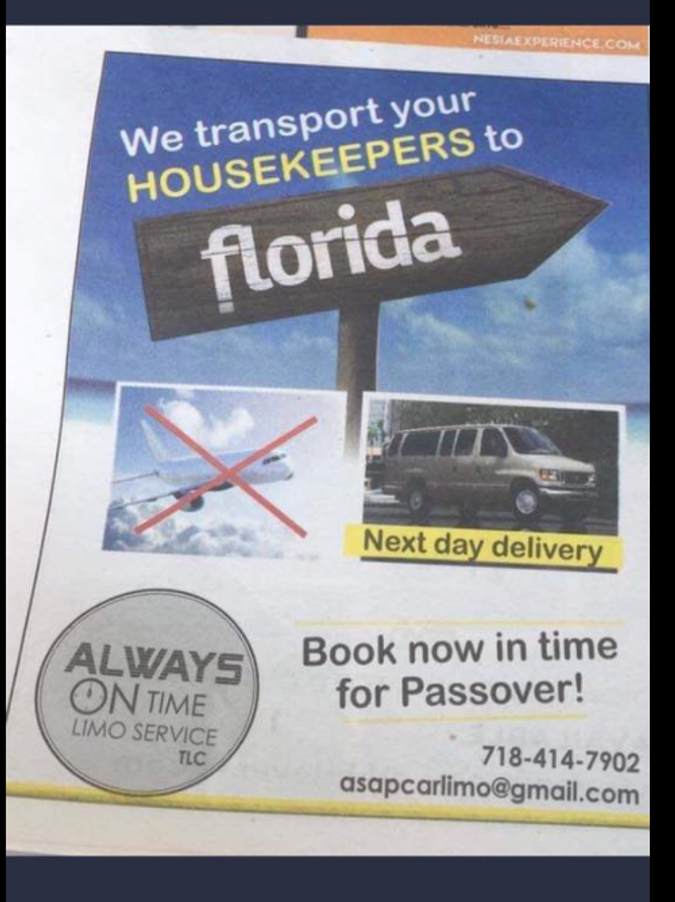 One man who made the drive for about five years years said he charged $650 for a round-trip ticket from the New York area to the desired Florida location. The man, who helps manage a New Jersey transportation company used exclusively by Jews, asked not to be named so as not to implicate his business.

He said he drove housekeepers, senior helpers and babysitters, and one year he brought about 35 women in all to Florida. He said he stopped offering the service several years ago because coordinating it took up too much time. The man said that Israel, whom he doesn’t know personally, started offering shuttle service around the time he stopped, and took over transportation for some of his old clients.

Israel advertises his Passover chauffeuring service each year, in Jewish publications read in by the ultra-Orthodox. This year’s ad went in Flatbush Jewish Journal; a previous ad was published in The Torah Times.

For the past few years he said he has driven between 10 and 20 women every Passover season. They work for households in New Jersey, on Long Island and in New York City. Israel said he asks the women to meet at a designated pick-up point for the nearly 20-plus-hour drive to Florida. They bring a cash payment and a slip of paper bearing their fixed destination. He doesn’t ask their names.

Israel said he does the drive straight, and that the women usually bring their own food for the trip. He mainly drops them off at locations around Orlando and the Miami Beach area, then heads straight back to New York. He said it’s not unusual for him to be in the driver’s seat for nearly 48 hours.

During the drive the radio mostly stays off, and Israel, who seems to respect the privacy of his clients, said he doesn’t speak with his passengers. He just chews Nicorette and stops for gas.

‘An opportunity to work’

Despite the risk that these domestic workers are exposed to, their “next-day delivery” to Florida is not necessarily a sign of exploitation, said Sima Milgraum, a personal injury attorney in Lakewood, New Jersey, who has represented Latino domestic workers of Orthodox families. Milgraum added that the private mode of transportation is a safer alternative to public transportation, and a sign that employers are worried about the status of their domestic workers.

“If the people are paying them well and treating them well, there’s no abuse whatsoever,” Milgraum said. “It’s giving people the opportunity to work.”

Though the “exposure is very high,” Milgraum said that undocumented workers in the United States know the risks.

Employers also often have genuine attachments to their domestic workers, according to Ilana Berger, director of Hand in Hand, a not-for-profit that conducts outreach for employers of domestic workers. She said that many families can be the first line of defense for undocumented employees fearing arrest and deportation.

“Across race, income and ability lines, what is true for many employers is that their lives are deeply intertwined and dependent on workers in their home,” Berger said.

Israel, however, tries to keep his life separate from that of his clients. He hasn’t set a date for this year’s pickup, though he has received some calls about bringing workers to Florida. He says his income is meager, and driving the undocumented women to Florida helps make ends meet. For him it is simply a job, no different from driving a client to the grocery store.

“I just open the door, they get out and I drive away,” he said.