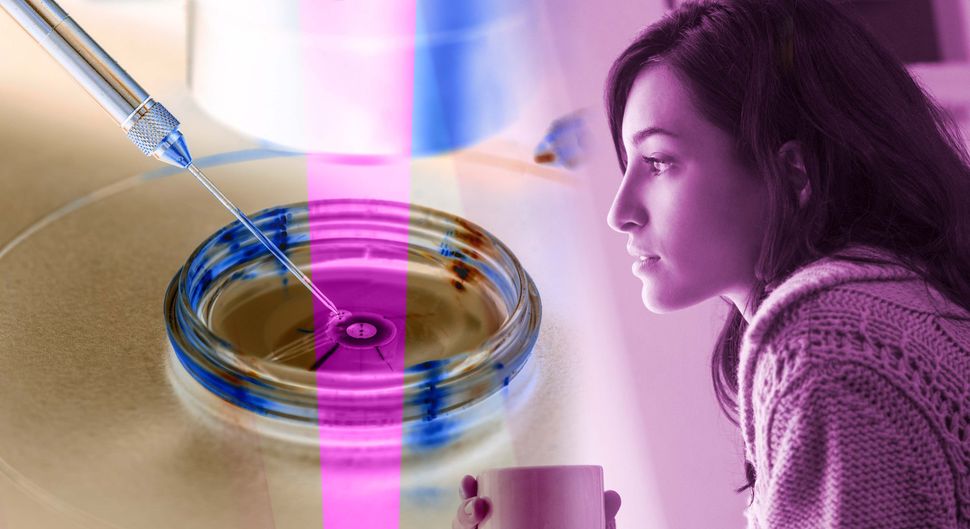 When “Tamar” was 32, her mother suggested she freeze her eggs. Actually, it was her mother’s gynecologist who’d suggested that she tell her daughter to do it.

“I flipped out. I really did,” said Tamar, who preferred not to give her real name. Her mother, Tamar said, isn’t usually the stereotypical intrusive “Jewish mother.”

“I just didn’t think I was the type to freeze my eggs — you know, obsessed with marriage and having kids,” she said. But four years later, when another relationship disappointed — “even calling it a relationship is a stretch” — the self-described hippie, who lives in Brooklyn, thought about it again. She was complaining about her dating life to a friend, who responded by asking, “Why don’t you just freeze your eggs?” This time it clicked. “She said it so casually. No one other than my mother had ever brought it up,” Tamar, now 39, recalled. Although she characterizes herself as normally very neurotic, reviewing “every decision” with her therapist, Tamar called a fertility clinic the next day to start the process.

Egg freezing, or oocyte cryopreservation, as it’s scientifically known, is not a new technology. Doctors have been able to harvest a fertile woman’s eggs, extract them and freeze them for future use since 1999.

Yet egg freezing does not by any means guarantee a family. Experts say there’s a 2% to 12% chance an egg will result in a live baby, depending on when a woman froze the eggs and other factors. (Here’s a calculator.)

Jewish women tend to marry and have children later in life (Orthodox women, who marry earlier than their denominational counterparts, are an exception). Egg freezing is becoming more popular in the Jewish community, although the evidence is anecdotal. It’s hard to find statistics on exactly how many women have used their frozen eggs successfully, because many women haven’t used their eggs yet — and don’t know if they ever will. It’s also still very much a private matter; for this article, most women asked to use a pseudonym.

Not Ayelet Sharabi. She wants to tell everyone to freeze their eggs, as she did — also at the behest of her mother. “My mom was really pushing me to do [it].She’d just heard about the option and knew she had no control if I’d marry soon or not, but if I had eggs waiting for me, she knew one day I could be a mom.”

Sharabi, an Israeli, went home for the procedure before her 41st birthday. She was shocked that she only got a few eggs — she thought she would get a dozen or more.

“As 20- and 30-somethings, we thought we had many years to make the decision; we went skiing, we traveled, we went to parties, we felt very young, everyone told us we looked young. You don’t realize your body’s not so young,” she said. But the procedures were a wake-up call, and Sharabi went back to Israel to have a child on her own. She did a few intrauterine inseminations (IUIs), which resulted in her daughter, now 3. Non-invasive IUIs, or “the turkey baster,” are easier than using frozen eggs.

When Sharabi tried to have a second child, her frozen eggs didn’t work. Still, she doesn’t view egg freezing as a failure. “It worked for me because it encouraged me to have my baby right away,” she said. “If I didn’t do it, I would still be waiting for Mr. Right to come.”

For “Rose,” a Sabbath-observant Jew from Washington, D.C., it’s more important to find a partner than have children. But due to the religious community’s pressure on women to procreate, she started thinking about freezing her eggs when she was 37. It took her a year to get the money — some $12,000 for two cycles.

Although Rose is close to her parents, she didn’t tell them about her decision. “I wanted to protect them from possibly feeling sad or having pity. From their perspective, life is family and children; freezing eggs means that I wasn’t achieving that.”

Despite her age, Rose got some 60 eggs, and it shifted her thoughts on having children. “That kind of success put me into this mode, now I have to use them — it’s feeling like, this is like what my body could do, and I’d be turning down what my body wants.”

Now 41, Rose still doesn’t tell the men she dates about her treasure trove. “It’s a solidarity with women. I don’t want to say ‘I’m still fertile’ — if men don’t want to date women of a certain age, that’s it,” she said. “It’s so hard to be a woman and be equated with how your ovaries are doing and I so resent that — I’m not putting it in my OkCupid profile.”

Men often don’t want to discuss fertility and egg freezing on dates. Despite the fact that women like Sharabi and Tamar say how “empowering” the procedure was for them, some men in their 30s don’t see it through the same lens: as a woman preserving her fertility or reducing the pressure of having children.

“Egg freezing has a stigma of women being baby-crazy,” said “Mark,” 34, a businessman from Long Island who primarily dates Jewish women in the 25 to 34 age bracket. “I personally feel a lot of pressure — I want to have kids, but I don’t feel I’m ready to do that in the next year or two….Someone who’s older than 35 — I don’t know the science of when you can or can’t have kids, but I don’t want to take the chance.”

Some older men appreciate women who freeze their eggs. “I want kids,” said “David,” 45, an Israeli scientist living in Queens. He tends to date women in their 30s, topping out at age 36. “Older than that would be a problem. I’m interested in kids, and I want to be able to date someone who could have them,” he said. “If she froze her eggs, it’s fine,” he conceded.

Even in the religious world, where having children is a priority, there may be a stigma about egg freezing because some in the community see it as a way to delay marriage, said Orly Wahba, 35, who is part of the Syrian Jewish community in Brooklyn and founder of Life Vest Inside, a nonprofit organization dedicated to educating people about how to live a life of kindness.

“Having children is one of the most important things on my list. Growing up in a Modern Orthodox Jewish community and being 35 years old, you get a lot of pressure,” she said. She kept telling herself, “hopefully this year, things are going to happen,” but then she realized it was time to take her future into her own hands. She even postponed moving to Israel to do a round of egg freezing in New York — for $5,000, plus $500 a year for storage.

“I think this is the single greatest decision I ever made in my life,” Orly said, adding that it has nothing to do with putting off getting married.

TOO LITTLE, TOO LATE?

The real problem with egg freezing — aside from judgments, myths and misconceptions — is that many women wait too long to do it.

“In 2009, the average age of a freezer was 37 to 41 years old — which is too old for success,” said Valerie Landis, founder of the Eggology Club podcast and Eggsperience website, which helps women with cryopreservation.

The best age to freeze is between 30 and 34, according to a recent study, which also found that freezing eggs at age 37 was the most cost-effective solution compared to not taking any action (i.e., not freezing eggs and trying to get pregnant naturally).

“I think people should do it close to 30,” said “Maddie,” who froze her eggs five years ago, when she was 35 and in a relationship with the wrong guy. “The stress is different when you’re 30 rather than when you’re 35 — you’re more relaxed,” she said. Raised in a Conservative Jewish family, Maddie always prioritized her career as a lawyer. “I’ve never been in a family where you have to get married,” she said. Freezing her eggs is “being in line with being a kick-ass professional woman taking charge of your life.” Although she doesn’t know how it’s going to play out in her life — will she use her eggs, will they work? –—she’s still glad she did it.

“What do you have to lose except some money and time? I don’t see any downside.”

But Michelle, a therapist in New York City, did see the downsides. In 2012, NYU canceled her first egg-freezing procedure because she wasn’t responding well to the medication and it seemed unlikely that she was going to get any eggs.

“I completely fell apart. it was horrible,” said Michelle, who was 37 at the time. She reached out to a rabbi. “I was begging for validation not to do it again. I was battling with God. I felt like how did I end up in this situation in my life? If God wanted me to get married, then why am I not married?”

But the rabbi advised her to try another round of egg freezing. “You’re showing God how much you want this,” the rabbi said.

Fast-forward four years: Michelle got married, got pregnant and miscarried at the age of 41. She and her husband started in vitro fertilization (IVF) –— with terrible results. They’d already started exploring using donor eggs when they thawed Michelle’s frozen eggs. Only one out of the 10 made it. “Don’t have a lot of hope,” the doctor warned her when they transferred the embryo.