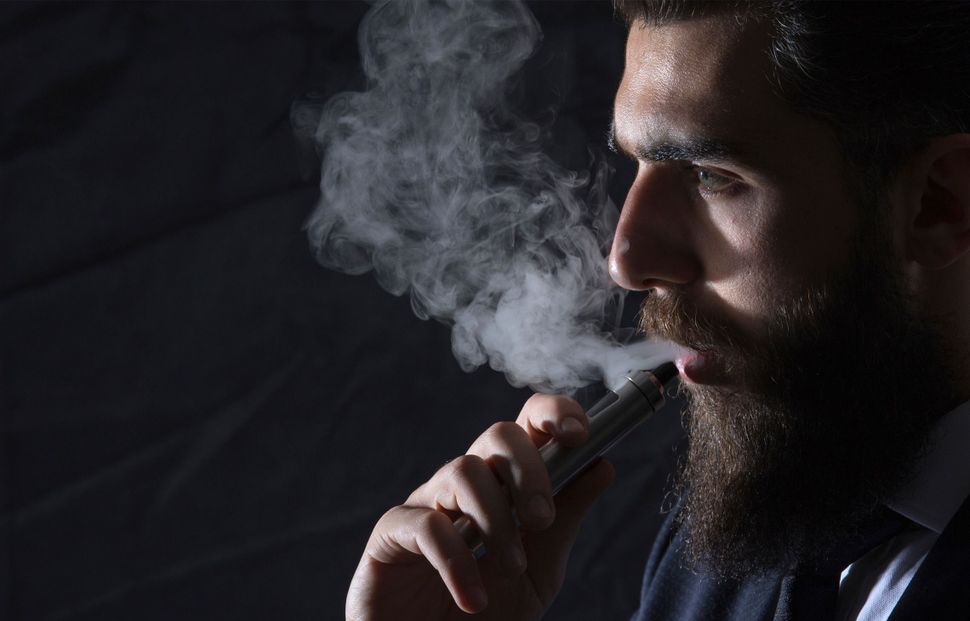 Walk into Drop Juice, an e-cigarette store in Brooklyn, and you’ll hear customers asking the normal questions about vapor, oils and battery packs — in Yiddish. The store is located next to a yeshiva in one of Williamsburg’s ultra-Orthodox sections.

Virtually of its customers are Hasidic, according to Moses, the manager.

They buy his products, Moses said, as a way to wean themselves off cigarettes, sometimes cutting their intake from two packs a day to the equivalent of three or four smokes total. One customer told Moses that after climbing the seven flights of stairs to his apartment he used to sit on the couch for ten minutes.

“Now, he walks up with a smile,” said Moses, who declined to give his last name.

Since e-cigarettes, invented in China, went on the market in 2004, their use has increased “exponentially” according to the New York Academy of Sciences. Their biggest fans are teenagers. They also have a reputation for being healthier than tobacco, but the science on that isn’t settled. Amid concerns from medical professionals about the various risks, some rabbis are telling their flocks not to vape.

“At this point, we should treat vaping exactly the same as smoking,” said Shmuly Yanklowitz, a Modern Orthodox rabbi. “There are few substances that would be forbidden [by Jewish law] from any consumption, but I think this is one.”

E-cigarettes are small devices that turn oil infused with nicotine and artificial flavorings into vapor. Young people like them because they come in sweet flavors like mango or bubblegum. In a given month, one in six American teenagers have used an e-cigarette, according to a report by the Surgeon General.

Indeed, vaping is a “new teen threat,” warned Rabbi Maury Grebenau, principal of the Yavneh Academy of Dallas, in a December blog post. He warned Jewish parents against thinking that because their children live in a tight-knit Jewish community, they wouldn’t use e-cigarettes.

Rabbis both living and dead have long disagreed on whether smoking is kosher. Some cite the many declarations about the importance of being healthy made by rabbis in the Talmud. The sage Maimonides wrote that it was a commandment to remove any “barriers” between oneself and perfect health. Others say that since smoking rarely puts you in immediate danger, it is allowed.

The Conservative movement has been officially against smoking for nearly thirty years. In the early 1990s, its association of rabbis, the Rabbinical Assembly, released an opinion condemning the consumption of tobacco.

“Smoking should, at least, be discouraged in synagogues, Jewish schools and in Jewish gathering places,” wrote Rabbi Seymour Siegel. “The rabbinate and community leaders should discourage smoking.”

Yanklowitz recently posted his opinion on the halacha, or Jewish law, of vaping. He argues that the overwhelming opinion of leading rabbis is that smoking is bad. Because we don’t know how bad vaping is compared to smoking, he writes, we should assume it is just as bad.

“We should be scaring people to not smoke; it’s a mitzvah,” Yanklowitz wrote.

Rabbi Aryeh Liebowitz, an Orthodox rabbi and teacher, took a slightly more lenient view in a 2015 episode from his podcast about halacha. He put it somewhere between donuts and smoking — bad for you, but permitted.

Liebowitz said there are other issues to consider, however. Does the flavored vaping oil have to have to be certified kosher by a rabbi? (Depends on if you consider the vapor to be food.) Is it kosher for Passover? (Depends on whether a dog would eat it.) Can you vape on a fast day? (Only if you’re really addicted, and even then only in private.)

“Again, the overall comment is, this is not a good habit,” Liebowitz said. “It’s generally a bad idea to ingest poison in any form.”

E-cigarette use has become a public health issue in Israel as well, where tobacco consumption is on the rise. A study published in 2017 found that 23% of the population smokes, up from around 19% in 2015.

However, ultra-Orthodox leaders in Israel have recently opposed increasing taxes on cigarettes and putting warnings on tobacco containers. Yaakov Litzman, Israel’s Health Minister and a member of the United Torah Judaism party, has called such warnings “not aesthetic.”

Moses, of Drop Smoke, says he doesn’t see that many Hasidic teenagers using e-cigarettes on the street, and that he would never sell products to anyone under 21. He insists that vaping is a useful way to quit smoking. He added that his customers feel supported in their habits by their rabbis.

Moses that “a nice percentage” of his clients eventually wean themselves off nicotine completely.

“They’re not customers anymore, but they’re good advertisements,” Moses said. “So it goes both ways.”