Can A Catholic Guy Save This ‘Hellhole’ Jewish Cemetery — (And Why Hasn’t Its Own Synagogue)? 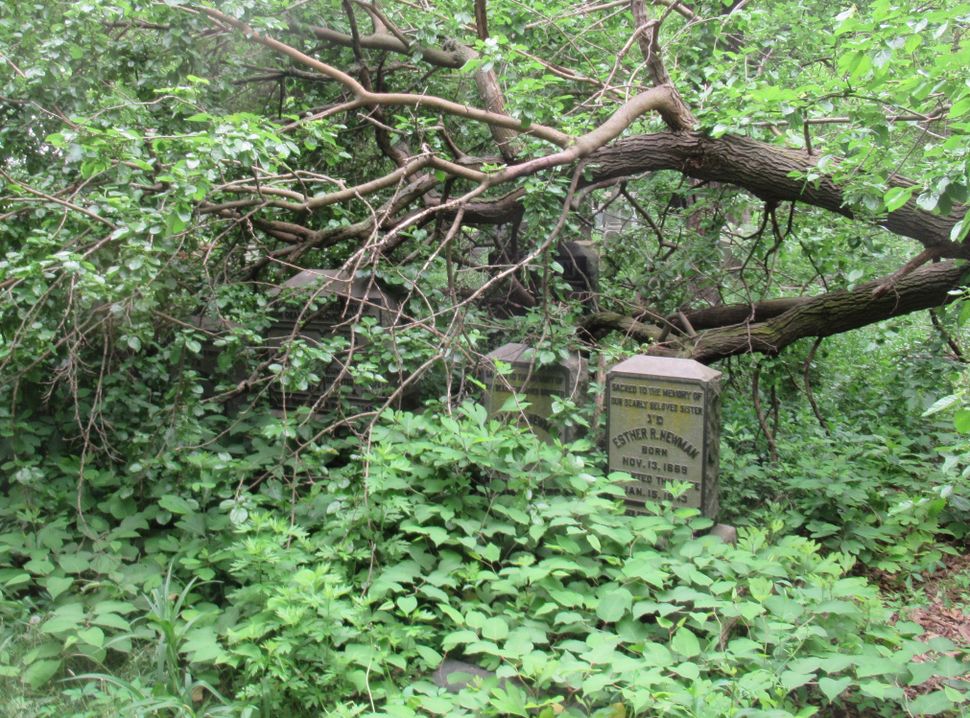 Bayside Cemetery in Queens is “abandoned.” It is “desecrated.” It is “the cemetery that nobody wants.”

Well, nobody but Anthony Pisciotta.

Just about every Sunday, Pisciotta, a Catholic man from the Bronx, romps through the knee-high undergrowth to maintain the parts of the cemetery that get the most foot traffic. He paints, he whacks weeds, he puts metal sheets over the doors and windows of the mausoleums. For over a year, he says, he’s been the only regular groundskeeper the 12-acre cemetery has.

“Every stone has a story. And that’s why I think it’s important that the place be saved and preserved,” said Pisciotta, who is not paid for his work. “Not just for the famous people but the regular people. They were cherished and loved by their families. They shouldn’t have to rest in this hellhole.”

Pisciotta may soon be getting some assistance. Bayside’s lawful owner, Congregation Shaare Zedek in Manhattan, will use the funds from the sale of its historic Upper West Side Building to help repair the cemetery and make it financially independent. But a not-for-profit that supports the restoration of old Jewish cemeteries says that Shaare Zedek is still not committing the funds necessary to properly restore Bayside. They worry that the synagogue doesn’t realize how dire the situation really is.

“I understand that it doesn’t look the way everyone would like it to look right now,” said Michael Firestone, Shaare Zedek’s president, adding that the building’s buyer has yet to complete the full $16 million cash transaction. “We’ve done what we can do with the advance, but the full rehabilitation has to wait until we get the money.”

In the meantime, spring has brought excess vegetation to the grounds of Bayside. Pisciotta recorded a walk he took through the cemetery in May on YouTube. The scene he captures is lush verging on apocalyptic.

Shaare Zedek bought the land for Bayside in 1842, and sold off about 95% of the plots to burial societies. The ties between synagogue and cemetery have been strained for decades now. The slow death of the city-wide network of burial societies has left the synagogue holding the bill for Bayside’s upkeep. Sometimes Shaare Zedek has set aside as much as 40 percent of its operating budget to service the roughly 35,000 graves, according to its lawyer. But for close to a decade, the synagogue hasn’t employed any dedicated administrative staff on site.

The cemetery’s former groundskeeper, who asked to have his name withheld because he works at other cemeteries in the area, said the synagogue stopped paying him in the spring of 2017. He says he left the job shortly after, and hasn’t heard from the synagogue since.

“It’s abandoned right now,” the groundskeeper said. “It’s a jungle over there.”

Pisciotta said he first noticed the cemetery when he was driving a delivery truck in the area more than 20 years ago. He became outraged when he heard that vandals had toppled some of the headstones and even desecrated some remains.

Pisciotta says he now tries to get there every Sunday. (His day job is working on New York City’s bridges and tunnels for the Port Authority.) His self-appointed tasks can take eight hours to get through. Sometimes he brings his 15-year-old daughter along to help.

“She’s been on so many of my tours that she could probably do it herself,” Pisciotta says. “She’s heard my spiel so many times.”

The tour involves cleaning the paths around the roughly 200 graves that Pisciotta says see regular visitors. That includes the final resting places of about 100 Russian emigres who died in the 1990s, plus a few family-owned plots. He also takes care to check on the large mausoleums that dot the property, since they have historically been a prime target for vandals. 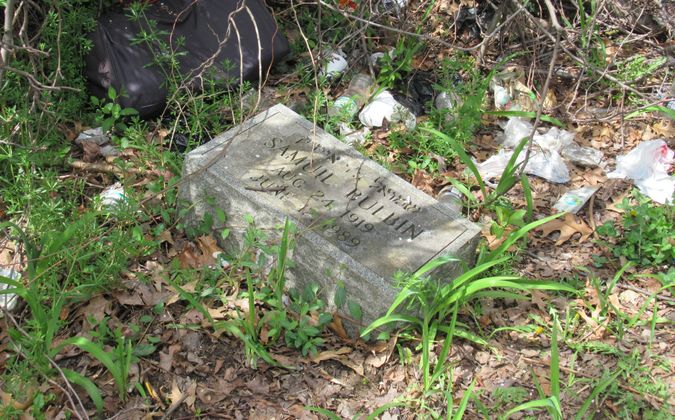 A toppled headstone in Bayside Cemetery. Image by Anthony Pisciotta

Bayside has suffered desecration over the decades, according to numerous reports in The New York Times. It has seen its headstones toppled and shattered since the 1950s. Thieves have looted the bronze guardrails around several mausoleums, and broken inside to steal skulls and stained glass, and set coffins on fire.

Pisciotta estimates that forty mausoleums have been broken into, and thousands of headstones tipped over or broken. The the Community Alliance for Jewish-Affiliated Cemeteries, or CAJAC, a not-for-profit that helps repair Jewish burial grounds, used to bring volunteers to repair the cemetery until last spring, when a thousand-pound monument tipped over without warning — and landed five feet from a volunteer.

Bayside’s reputation for Tomb Raider-level danger has spread well outside its ripped chain-link fences: The website keruvim.com, which lists burial locations for famous rabbis, advises visitors to “use caution when visiting!!! In the event of an emergency call 911.”

Alan Friedman, CAJAC’s president, lays the blame for the cemetery’s neglect at Shaare Zedek’s feet. He says they misused synagogue funds that should have been properly earmarked for the cemetery over a fifty-year period. A 2007 lawsuit accusing the synagogue of similar financial mismanagement was dismissed in 2009. Another suit alleging similar wrongdoing is still in court; Shaare Zedek has moved to dismiss that case as well.

“[The cemetery] wasn’t a priority of theirs,” Friedman said of Shaare Zedek. “They tried to distance themselves from it.”

But Firestone, Shaare Zedek’s president, says that’s not true, and that one of the main reasons the synagogue sold its building was to help solve the problems at Bayside.

“When you ask, ‘What has the synagogue done for the cemetery?’ — it sold its sole asset,” he said.

For years the synagogue had its hands tied because of its dire financial situation, Firestone said. Its membership, currently under 100 families, had barely been able to cover the costs of maintaining its hundred-year-old building on West 93rd Street.

As part of its deal with the building’s buyer, the New York attorney general’s office asked the synagogue to include a plan for rehabilitating the cemetery. The synagogue’s lawyer, Russell Steinthal, said he wrote in court filings that they estimated “conservatively” that the project could total $8 million — half the cash they’ll get from the building sale. But according to contractor bids he’s reviewed, Steinthal says the repairs might cost as little as $1.4 million. The synagogue also plans to put $4 million into an endowment for Bayside, so it can essentially maintain itself.

“To do it right, it’s $15 million,” he said. “$8 million is probably the rock bottom number, considering the thousands of tombstones that are either about to fall or are literally below the ground.”

Friedman rattled off a list of repairs the cemetery needs to return to its one-time status as a premier cemetery: completely new fencing, accounting for all the headstones, rebuilding its rundown administrative building, installing a robust security system throughout the cemetery. The endowment, Friedman said, also needs to reflect the challenges Bayside presents for regular groundskeeping. Narrow stone paths make it difficult to get around the property; graves that are densely packed together are hard to properly clean.

It’s not clear how quickly Shaare Zedek’s plan can go into effect. Firestone says the synagogue’s board is currently reviewing it; after that, it will be sent to the attorney general’s office for approval. Steinthal says they hope to do as many repairs that don’t require state approval as they can this summer. In the meantime, they have security posted at the cemetery on Wednesdays and Sundays for people visiting their buried beloveds.

And until the repairs happen, Pisciotta will be there, bushwacking and cleaning headstones.

“He’s still there with his faith and his loyalty, still putting in work over there,” Bayside’s former groundskeeper said. “He likes things to get done.”

Can A Catholic Guy Save This ‘Hellhole’ Jewish Cemetery — (And Why Hasn’t Its Own Synagogue)?