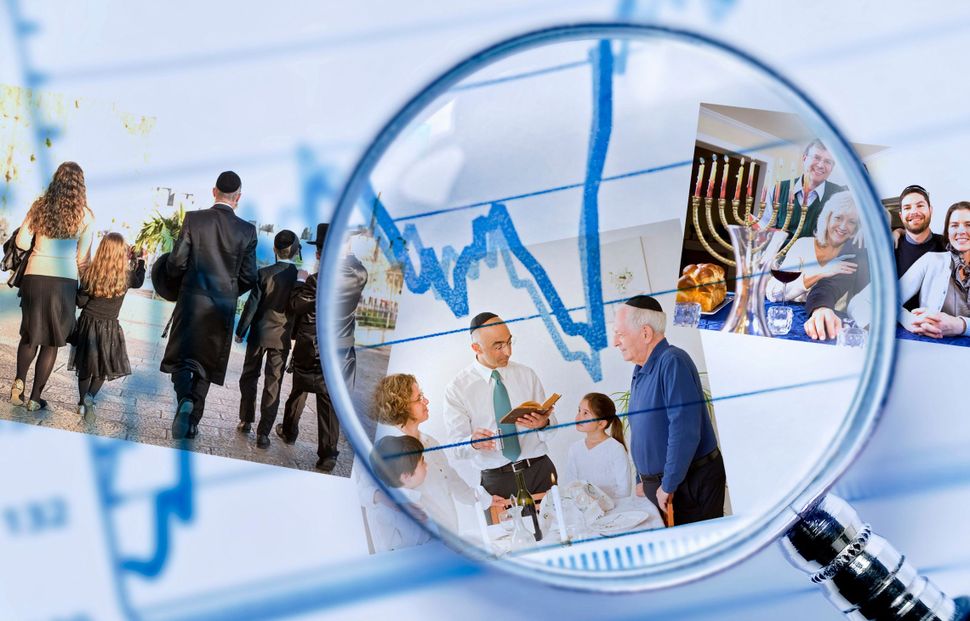 It’s been nearly five years since the Pew Research Center released its “Portrait of Jewish Americans.” Given its stark conclusions, the study ruffled some feathers even as it expanded our notions of Jewish community. It highlighted the impact of intermarriage and the growth of the Orthodox community, and has impacted policy making for Jewish communal leaders ever since.

Pew said it does not have any plans to replicate the costly and comprehensive study at the moment. But that hasn’t stopped other prominent researchers from revisiting the survey to try and stretch its conclusions into the future. 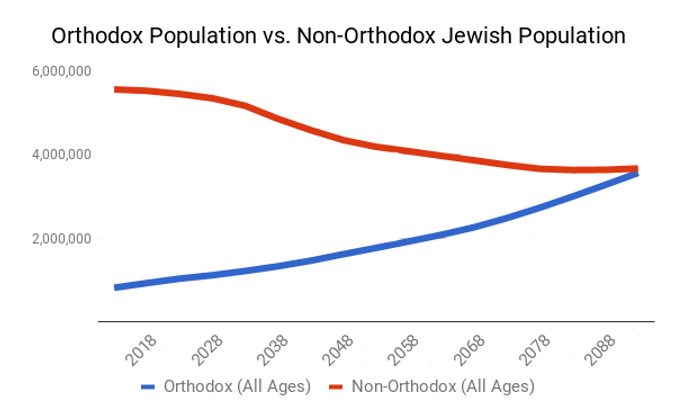 By the end of the 21st century, Orthodox Jews will likely outnumber non-Orthodox Jews. Image by Laura E. Adkins

The latest analysis comes from Dr. Edieal Pinker, a professor at Yale University’s School of Management, and Dr. Steven M. Cohen, a sociologist at Hebrew Union College-Jewish Institute of Religion in New York and an adviser to the 2013 study. They used Pew’s data to project the size of the Jewish population and chart the changes in its composition over the next 80 years. Though the analysis has not yet been submitted to any scholarly journal, Pinker provided the Forward with an initial summary of their projections.

They highlight the tremendous impact that birth rates of Jewish women and the rate at which Jews shift between denominations will have on the size of each Jewish sub-community. The findings suggest that there is a leadership vacuum opening up in the liberal denominations of Judaism.

Some of the results of their number-crunching are not exactly shocking: The Orthodox community is indeed growing rapidly while the Reform and Conservative movements are shrinking.

There will be more Orthodox than Reform and Conservative combined within about 40 years. And before the end of this century the Orthodox will outnumber all other American Jews combined, including those who belong to no denomination. 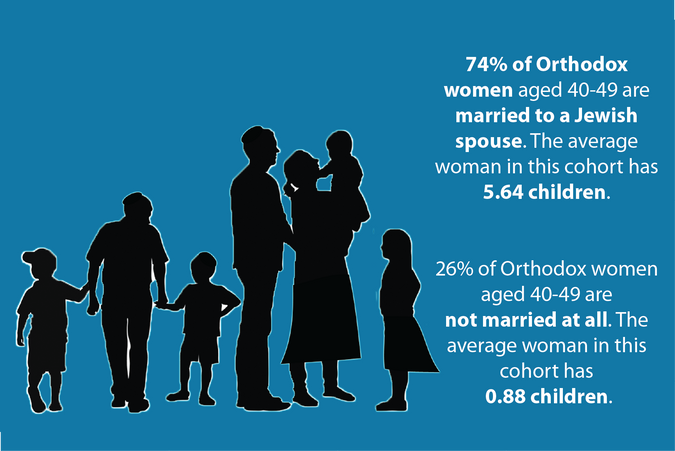 The analysis also offers some interesting possibilities for the future of American Jewish society. If current trends continue, the Reform and Conservative movements will soon see a significant collapse in what the researchers term the “leadership age-group,” people aged 30-69 who are most likely to serve as vital community-sustaining lay leaders and donors. This group could lose more than two-thirds of its current size over the next 80 years.

This cratering, Pinker and Cohen say, is “locked in.” That’s because less than two-thirds of Jews who have two parents who identify either as Reform or Conservative end up staying in either denomination. While about a tenth join Orthodoxy, 22% become Jews of no denomination.

At the same time, the number of Jews raised in Orthodox households who eventually leave Orthodoxy is rising in proportion to the community’s exploding population.

In a conversation with the Forward, Pinker cautioned: “You have to take this all with a big grain of salt, because you’re predicting the future.”

“Projections are not predictions,” added Alan Cooperman, Pew’s director of religious research. “They tell you what will happen if the current estimate of the size and shape of a population is accurate, and if the present trends hold for the future.”

The study shows that due to their high fertility rate and relatively low rate of attrition, Orthodox Jews will likely shift from a small minority to the dominant majority of American Jews, growing from less than 1 million to a high of 3.5 million adherents. This will propel a net growth in the American Jewish population by the end of the century, from about 6.5 million Jews now to 7.2 million in 2093. Before then, however, the data suggest that the Jewish population will dip slightly, starting in about 2030 until around 2050. This is primarily due to the significant decline in the size of the Reform/Conservative community, which will likely drop from around 3.5 million adherents to a low of 1.5 million adherents over the next eight decades. All the while, the number of Jews of no denomination will hold relatively steady, hovering at around 2 million, due to a great number of Jews raised in other denominations who will likely end up in this category.

“In demographics there’s a lot of momentum, and once it gets moving it takes a lot to shift it another way,” Pinker said. 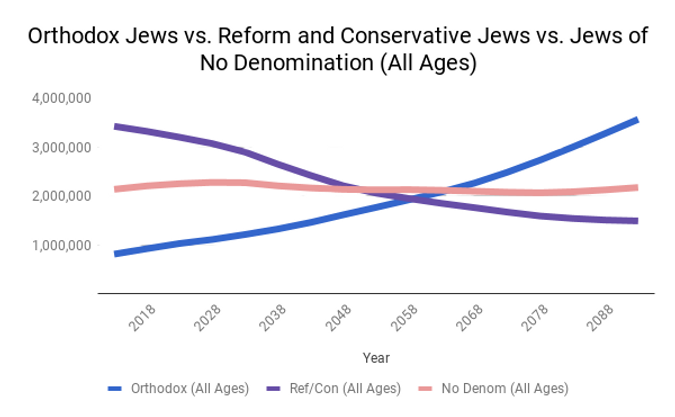 Cooperman, who has not seen the results of Pinker and Cohen’s analysis, said that projections are perhaps most useful for identifying relevant trends to examine going forward. In this analysis, Pinker says, the trends to watch are movement between the denominations and the fertility rates.

One of those trends may provide a silver lining for those invested in the future of Reform and Conservative Judaism. Pinker and Cohen note that while the Orthodox population will continue to grow, so will the number of people leaving Orthodoxy for more liberal streams of Judaism. Those “defectors,” as the study calls them, will make up a larger and larger proportion of the Reform and Conservative population, as much as a quarter by the end of the century. That trend will be even stronger for the Jews of no denomination — nearly 40% of their population will be “defectors” from Orthodoxy by 2093.

“The attrition from the Orthodox helps sustain the other groups,” Pinker said.

It’s hard to say how this might change the nature of American Judaism.

Benor added that one of the key assumptions of Pinker and Cohen’s study — that Jews can be organized by “denomination” — might not even apply in the 2090s.

“The idea of denominations might not even exist then,” she said.

Because of the tricky nature of population projections, Pinker and Cohen’s analysis comes with a lot of assumptions. One of those has to do with nomenclature: They classify “Jews of no denomination” to include those who belong small liberal movements like Reconstructionist Judaism. 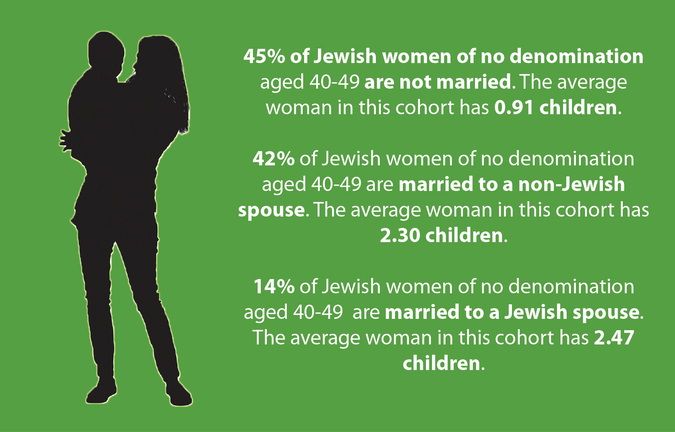 Another assumption Pew, Pinker and Cohen make is that the variables used to determine population growth for any group — fertility rates, mortality rates and inter-denominational migration rates — will stay the same for decades to come. In Jewish demography, the rates of fertility and migration between denominations take on outsize importance, and Pinker says it’s not at all a given that they’ll remain the same.

“The biggest question marks will be those figures,” he said.

But Pinker is hopeful that his analysis will prove useful for policy makers in the Jewish world. In particular, he thinks that interested parties should pay attention to the number of children women in the non-Orthodox denominations are having — or, as the case seems to be, not having.

“Where would I put my money? I would say fertility,” he said. “That’s what these dynamics bear out.” 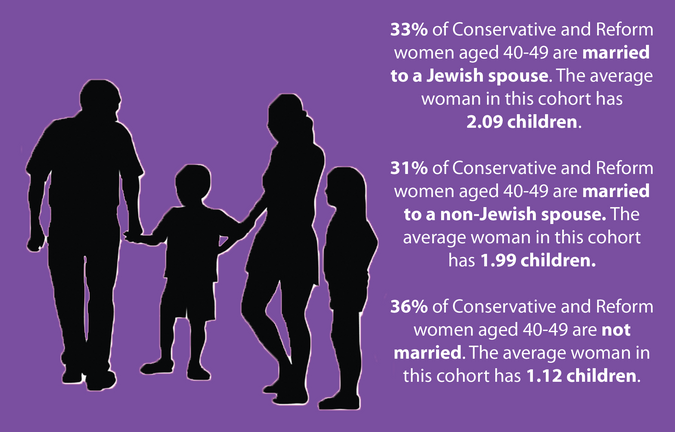 Benor said that even though the figures in this study may worry some, it’s impossible to know what kind of American Jewish world they forecast.