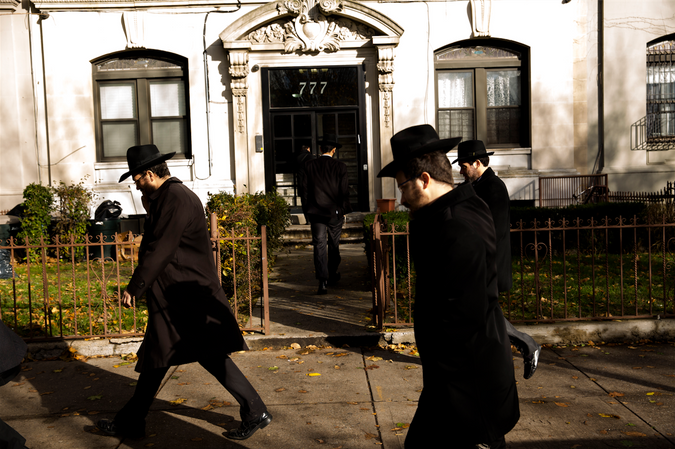 Participants from the annual International Conference of Chabad-Lubavitch Emissaries, in front of Chabad Lubavitch World Headquarters November 19, 2017 in Crown Heights. They are among 4600 rabbis from around the world who are in New York for international conference aimed at reviving jewish awareness around the world. Image by Getty Images

Crown Heights was predominantly Jewish from the 1920s through the 1960s, but the neighborhood was more secular than we know it to be today. In 1959, in a humorous column for the Forverts, Joseph Simon Goldstein noted the dramatic shift in observance as the Lubavitch movement began to take more prominence. In his piece, he and a friend lament the new look of the streets, which had become flooded with “Yeshiva boys” shoving etrogs and lulavs in the faces of the less religious. Today, Crown Heights is still the center of Chabad-Lubavitch and its Jewish outreach mission. 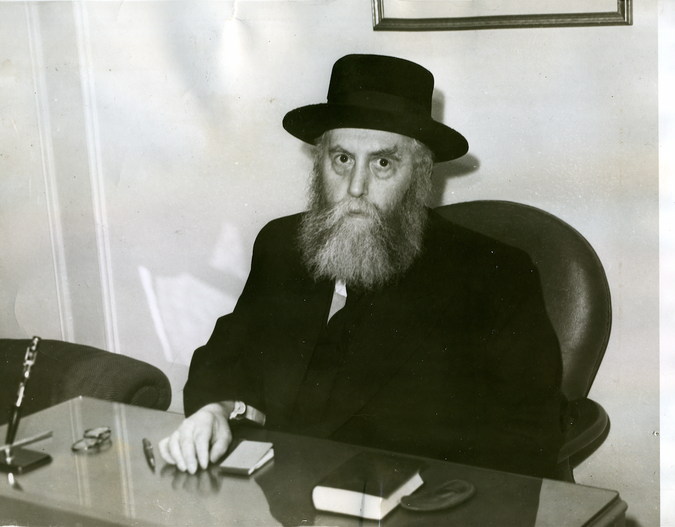 A Yid Tsu Yidn [From One Jew To Another]

Yidishkayt [Jewishness] Flourishes On The Streets Of New York

Amongst my neighbors there remains to this day, one unbending freethinking secular type. He doesn’t want to know anything about synagogues, nor hear about rabbis and shoykhtim [ritual slaughterers]. Thankfully, he’s still got a sense of humor and finds the comedy in his own dissent.

Let’s call my neighbor “Harry,” though that’s not his real name, who says about himself that he’s such a misbeliever that when invited to a wedding, to avoid the ritual, he arrives after the khupe ceremony. He admits to blocking his ears beneath his own wedding khupe [canopy], just before the line “for you are betrothed to me…” to avoid hearing it recited.

Recently, on the intermediary days of sukes, I suggested, as is our routine, that we take a walk in the nearby Brooklyn Botanical Garden, but jokester Harry earnestly hesitated saying:

“I am simply afraid to go out on the street. Last year on sukes I ambled about our Crown Heights neighborhood, and these Lubavitch yeshiva boys assaulted me. I barely escaped them.”

“What? Yeshiva boys are also now, god-forbid, ‘juvenile delinquents?’ They’re out there mugging folks on the streets?” I asked him, and Harry explained himself.

“The Lubavitch Yeshiva boys are by no means assaulting people and stabbing them with knives, you see what I mean? Each of them, carries an etrog and lulav. Wherever they observe a Jewish boy or even a middle aged or elderly man, they stop them, shove the etrog and lulav into their hands and order them to sway and recite the prayer. Last year they literally worked me over and would only ransom me with the lulav and etrog.”

“It’s worse than back home in the old country. There, the Hasidim ran through the streets on shabes ensuring that nobody smoked, nobody was spending money shopping, nobody was wearing linen and wool mixtures. They darted around guarding us from sin. Here, it seems, they careen through the streets with a huge pot in one hand and a bottle of sweet wine in the other, trying to force us to eat cholent and make Kiddush. Nothing’s too outré for this bunch!”

What can you do, I told myself. America’s a free country. Everyone’s at liberty to do whatever they feel like, so long as it’s legal. You know what they say — the world’s for the taking. Az men gibt—nemt men. So long as it’s being freely offered, say yes. But if the etrog and lulav are being forced on you, and you identify as an anti-etrog / lulav type — you can always refuse it.

“Seems to me,” Harry concluded with a smile, “there is a legal issue here. I nearly made an official complaint with our Brooklyn District Attorney Mr. Edward Silver, but I was afraid it would fall through in the end. They say the DA himself is also a Lubavitch Hasid, and even if he’s not actually a practicing Lubavitcher, he is definitely a Lubavitch ‘fellow-traveler.’”