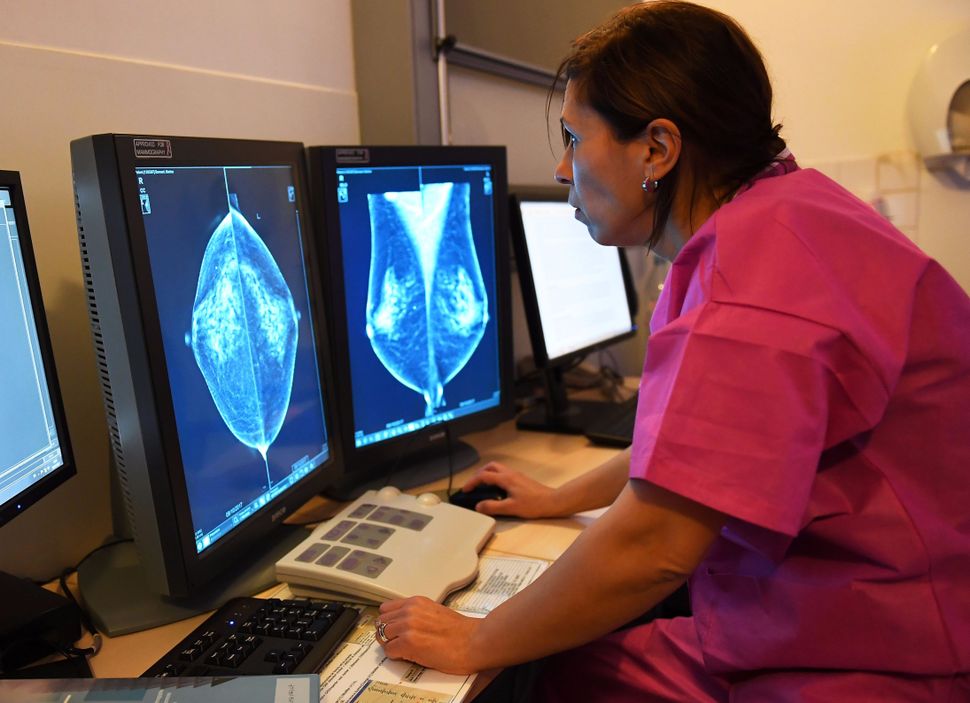 Most Jewish women face the question at some point: To test, or not to test.

It is widely understood that Ashkenazi women are uniquely at risk for breast and uterine cancers — a risk that boils down to a few genetic indicators.

Now, the genetic testing behemoth 23andMe is offering a new, FDA-approved test for three such indicators — mutations on the infamous BRCA gene, commonly known as being linked to breast cancer. But some genetic screening services are telling consumers — and Jews — to be careful. They say that the test is limited, and does not come with the professional counseling necessary to understand the test results.

“The issue for Jews is really the same issue for everybody, except that this is a special issue for Jews because of the prevalence of these genes in our community,” said Jason Rothstein, director of the Sarnoff Center for Jewish Genetics at Jewish United Fund of Metropolitan Chicago.

In April, the Sarnoff Center issued a statement about 23andMe’s test, approved in March. The statement did not criticize 23andMe’s test directly, but offered some background on the BRCA gene, and urged consumers to seek genetic counseling before and after taking any genetic test.

“Genetic counseling and education, both prior to doing the testing and after receiving the results, is critically important,” said Karen Grinzaid, the director of Emory University’s JScreen Jewish Genetic Screening Program and a genetics counselor for over three decades. She added that informing people ahead of time about what they can learn through testing can help avoid traumatic shocks.

“If people don’t go into this type of testing with that type of understanding, we don’t know what kind of reaction they’re gonna have, especially if they have a positive result,” she said.

In the U.S., women have an approximately 12% chance of developing breast cancer over their lifetime. But having certain mutations on the BRCA 1 and BRCA 2 genes of your DNA can push that likelihood up to 70%, according to studies published in the Journal of the American Medical Association. These mutations are found in Ashkenazi Jews at ten times the rate in the general population, and are more often the dangerous kinds.

Accordingly, the BRCA genes are a major focus of cancer research. Certain mutations on the BRCA 1 and BRCA 2 gene — which normally code for proteins that suppress tumors — can increase the carrier’s risk of cancer considerably. These mutations can result most often in breast and uterine cancer, but can cause other types of cancer as well, such as of the pancreas. Both men and women can have, and pass down, BRCA mutations. 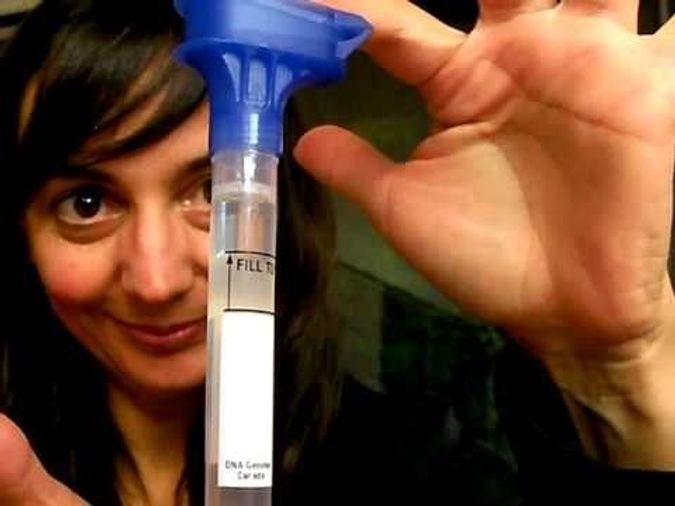 A woman shows off her 23andMe spit vial before mailing it to the company’s labs. Image by YouTube

Not all BRCA mutations are known to be correlated with cancer — though 1,000 of them are. The test offered by 23andMe, by comparison, tests for three such mutations. The mutations in their test are among the mutations most commonly found in people of Ashkenazi descent.

But regardless of whether one has the BRCA mutations, there are other gene variants and mutations that can amplify your risk for cancer. Direct-to-consumer tests like the one offered by 23andMe don’t scan for these other genetic puzzle pieces, some of which can prove as important to predicting the likelihood that you’ll get get cancer as a specific BRCA mutation.

A negative result “can provide a lot of false reassurance to people who may actually be at risk for other reasons,” said Rothstein.

And if it’s positive?

“You’re left without a clinical pathway or support to help navigate that situation,” he said.

23andMe, in its Terms of Service, encourages customers to speak with genetics counselors and medical professionals before getting test results. But Grinzaid said that without a genetics counselor providing a specific referral, a customer might not end up speaking to an appropriate doctor for their test result.

23andMe’s site also notes that certain test results, like those for mutations that can lead to cancer, are not comprehensive reports on a person’s risk for cancer. Grinzaid said that such disclaimers are not sufficient.

“Even if that information is in front of the person, people don’t read the fine print,” she said. “They’re gonna see a negative test result and say, ‘Oh, I’m not at risk for cancer.’”

But on the whole it is better to offer direct-to-consumer testing than not, according to Kelly Metcalfe, a breast cancer prevention researcher at the University of Toronto. In 2015, she authored a paper published in the journal Current Oncology arguing that all Jewish women should receive BRCA screening, to save lives and take pressure off the medical system.

“We know that women want this information,” Metcalfe said. “We know that getting positive test results may be distressing initially, but is okay in the long term.”

Metcalfe said, however, that any cancer screening should come with robust counseling — especially for people who test positive. Part of the problem, she said, is that consumers don’t know what they need to know about cancer testing. For example, that 23andMe’s test only covers genes that are found almost exclusively in people of Ashkenazi descent.

“For someone whos not Jewish, that’s not gonna be helpful,” she said. “I don’t think people quite understand, nor should they be expected to understand, that this is an issue.”

But the blame for any potential problems that can arise from this testing method does not only lie with 23andMe, Rothstein said. Other companies are increasingly offering these kinds of services, and the FDA is approving them — which is why, Rothstein said, consumers need to know the risks of testing.

“If [23andMe] were to go out of business tomorrow, this is still the direction that testing is going,” Rothstein said.

Update, June 25, 2018, 5:15 p.m. — This article has been updated to show that the Sarnoff Center’s statement was first released in April.