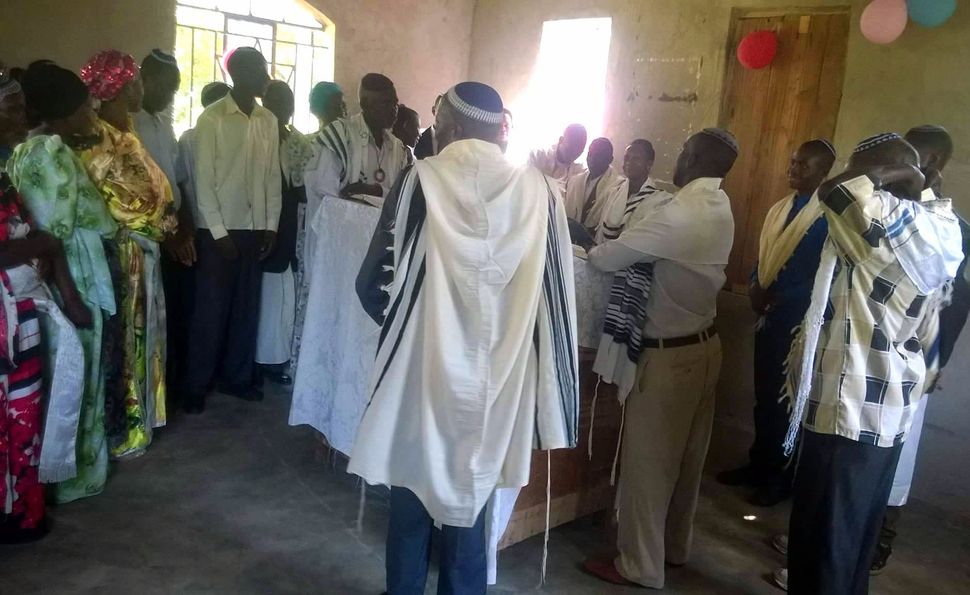 Members of the Abayudaya, the Jews of Uganda, pray in synagogue Image by Mugoya Shadrach Levi

(JTA) — Growing up in Uganda, Shoshanna Nambi was active in her small Jewish community. She taught songs and the Torah portion to younger children and was a member of her community’s youth group. Learning Hebrew also seemed to come easily. So it seemed obvious to her that she would consider becoming a rabbi.

But even though her community is egalitarian and affiliated with the Conservative movement, some were not aware that a woman could be a rabbi.

“One kid said to me that she would want me to be a rabbi, but I’m a woman,” Nambi, 29, recalled in a phone interview from Mbale, a rural town in Uganda’s east.

That incident was one of the reasons she decided to attend rabbinical school, Nambi said.

Nambi believes the community is now “open to having a woman rabbi.”

This fall, she will start her first year of studies at Hebrew Union College-Jewish Institute of Religion, the Reform movement’s seminary. She hopes to return to her community one day and serve as a role model for other women and girls, but anticipates that she won’t be able to do so in the near future.

Her home community struggles with issues such as access to clean water and electricity, and Nambi worries whether they would be able to financially sustain a rabbi. The current rabbi, Gershom Sizomu, is a member of the country’s parliament who works in Kampala during the week and travels home to Mbale on the weekends.

The Ugandan Jewish community, which is called the Abayudaya, traces its roots to the early 20th century, when a former leader read the Bible and embraced Judaism. Most of the community’s 2,000 members were converted under the auspices of U.S. Conservative rabbis in the early 2000s and thus are not recognized as Jewish by Israel’s Orthodox Chief Rabbinate. Nambi says her grandparents started practicing Judaism, and her immediate family has been doing so ever since.

Nambi’s journey to rabbinical school wasn’t straightforward. After graduating from the University of Kampala in 2011 with a degree in business administration, she worked in health care and for an agricultural company.

She applied to study at Hebrew Union College last year, but says she was rejected because her Hebrew skills were not sufficient. So she spent the past year studying Hebrew and Jewish texts at the Pardes Institute of Jewish Studies, a nondenominational yeshiva in Jerusalem. That meant living with a host family in the Israeli city and leaving her 9-year-old daughter, Emunah, with family members in Uganda — an experience she described as “hard for both of us.”

This time Emunah will join her both for her first year of studies in Jerusalem — HUC requires all its students to spend their first year at its campus there — and her remaining studies at the New York campus. The rabbinical school is covering her tuition and providing a living stipend, and she and her daughter will live with the same family that hosted Nambi last year.

Nambi hopes to arrive in Israel in July, when the HUC semester starts, but she is still waiting to hear back from Israel about her visa application. Members of her community have faced problems entering the country, and last month its Interior Ministry said it did not recognize the community as Jewish for the purpose of immigration. Nambi said she was “very disappointed” at the decision, which prompted an outcry from the Conservative movement.

“I just hope that the situation changes, but probably we have to fight a little more,” she said.

Many in her home community are “surprised” that she is attending a Reform institution rather than a Conservative one, but they are welcoming nonetheless.

Nambi said she was drawn to the Reform movement because of its openness to questioning Jewish tradition, such as the idea of Jews being God’s chosen people and the observance of matrilineal descent.

That differs from her home community, which is more rigid in its practices.

The Reform movement’s embrace of diversity in its communities also resonated deeply.

“I think it’s one of greatest things that they do,” she said.

In addition to learning more about Reform practice, Nambi hopes to introduce her fellow students to Ugandan Jewish traditions, such as the melodies used for prayers.

“Our services are very musical, and we have a lot of tunes of our own that we have composed to the various Hebrew songs,” she said. “I think it’s really nice, and I would like to bring together these two worlds.”

The majority of Ugandans are Christian, but the country has a significant Muslim minority. The Jewish community makes up only a tiny portion of the country’s population, which is about 40 million. But visits by Jews from other parts of the world made her feel more connected to the global Jewish community.

“We were always so happy,” she said, “and it was [a source of] pride for us that there are other Jews in the world, this community is not alone.”

Nambi was also able to meet Jews from other parts of the world through participating in various programs in the United States.

Kulanu, an organization that supports Jewish communities in the developing world, paid for her to attend the American Jewish University’s Brandeis Collegiate Institute, a California-based program that brings together young Jewish adults from around the world, and brought her to the U.S. twice on fundraising speaking tours to synagogues. Kulanu also helped cover some of her expenses to study at Pardes.

Nambi had visited Israel prior to attending Pardes last year, but staying longer and living there was eye opening: It helped expand her view of the country beyond what she had learned in Uganda.

“Israel is not what you think of when you’re back home,” she said. “It’s a modern-day reality, it’s a day-to-day living situation, and people and stuff. It’s not only the Bible.”

Nambi can’t wait to start her new journey there.

“I’m just so excited to start,” she said. “It’s something that I’ve been looking forward to for a really long time.”