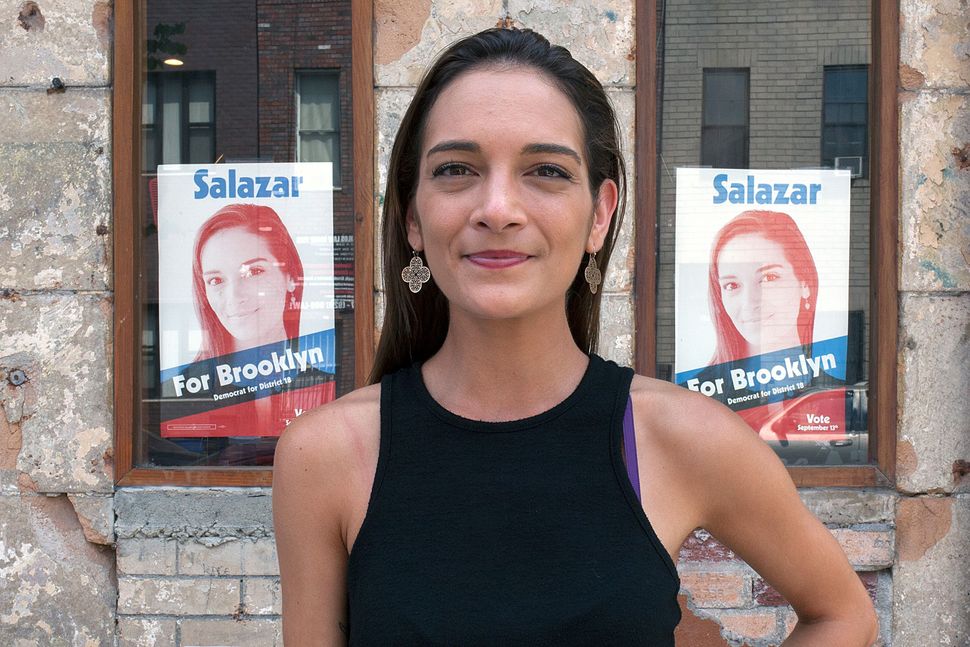 College was where Julia Salazar began to really explorer her Sephardic roots and class consciousness.

She attended Columbia University, one of the most heavily Jewish schools in the country, but also one of the most affluent. For Salazar, it was a crucible that forged her identity as a Jewish working-class woman.

“I was a nanny, I cleaned apartments,” she said, reflecting on her college years. “… coming from a big public [high] school with less resources, and having been supported by social programs like social security checks, that was a very different lived experience than a lot of my peers. And I think it contributed to me developing class-consciousness and also my own political worldview.”

She also came from a unique Jewish background. She was born in Colombia, and her father was Jewish, descended from the community expelled from medieval Spain. When her family immigrated to the United States, they had little contact with the American Jewish community, struggling to establish themselves financially.

Now that identity has propelled her into politics. The 27-year-old is now running for a New York State senate seat as a Democratic Socialist, one of a new generation of politicians who are racing to the left in the Trump era. Most of these young guns are taking aim at Israel as criticism of the Jewish state becomes increasingly expected from progressives. In this, Salazar may have been ahead of her time. She’s been there, done that and moved on.

Salazar is running against establishment incumbent State Senator Martin Dilan, who has represented north Brooklyn’s 18th district since 2002. Dilan has more money and more name recognition. Yet Alexandria Ocasio-Cortez, also a young Socialist Latina, pulled off an historic upset in June against a similarly entrenched primary opponent. Now Salazar’s campaign headquarters in a converted Bushwick café is buzzing with young volunteers wondering if she can do the same thing.

The sidewalk chalkboard that used to advertise cold brews now touts her campaign. One July afternoon, a young canvasser greeted her with a shout of “So cool!” Salazar stopped for the requested selfie, smiling warmly. 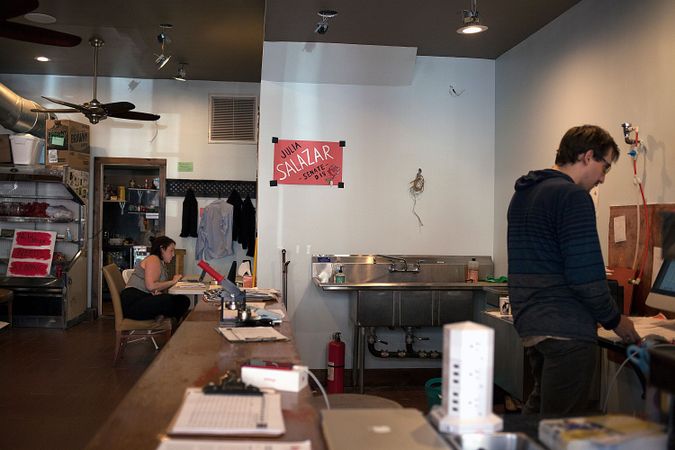 Her mother raised Salazar and her brother in a secular household, and Salazar excelled at school, eventually landing at the elite university. Her father died when she was 18.

At school, she got involved in Jewish life and activism. She started to attend Shabbat services and helped found a chapter of J-Street, the left-leaning pro-Israel organization. She also became involved with IfNotNow, the group that wants American-Jewish institutions to become more aware of Israel’s occupation of territory Palestinians consider their homeland, while protesting the 2014 Israel-Gaza conflict.

She even wrote several articles for Mondoweiss — a publication reviled by many Israel supporters — one of which stated that the “Israeli State has brutally occupied Palestinian land since the moment it was established” and that the conflict presented an “unprecedented opportunity for American Jews to finally stand unequivocally with Palestinians in the face of the institutions which oppress them.”

But after graduation, her focus shifted toward local issues. 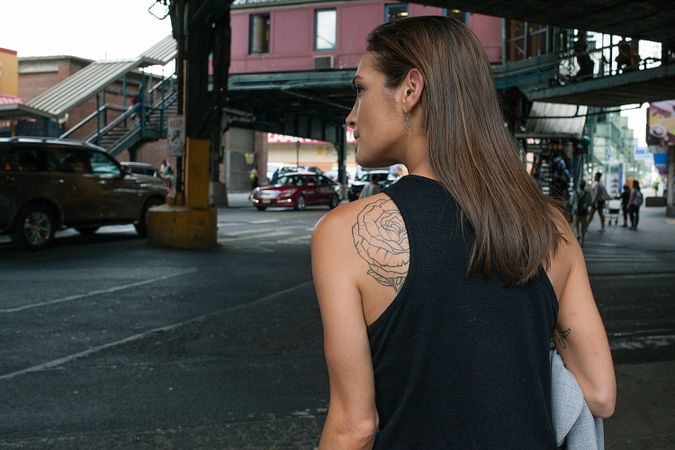 “At that point I didn’t feel like I could effect change there, and I would still say I feel that way, and that’s why I’m just focused locally. And I don’t follow it closely like I once did.”

However, Salazar isn’t worried that these past criticisms will come back to haunt her, either.

“But I think that in the Democratic Party in general it has gotten easier for people to talk about [Israel] without being a pariah or marginalized as progressive leaders,” she said.

There’s a small Jewish population, but even they belong to the anti-Zionist Satmar sect.

Salazar traces her passion for solving urban problems back to one pivotal episode, which took place when she was 21 or 22 and dealing with a negligent landlord while living in Harlem.

“And after trying relentlessly to get the management company to listen to us, eventually they completely ignored us and sort of abandoned the building even though all of us were still paying rent,” she said, adding that she eventually organized her fellow tenants.

“And it was terrifying but we withheld our rent for three months…[We] documented everything and eventually went to housing court with the management company and ultimately we won concessions from them.”

During the Black Lives Matter protests, Salazar became interested in police accountability issues. She noticed that a group called Jewish For Racial and Economic Justice was doing a campaign called “Jews for Black Lives,” and joined up.

She started lobbying on issues like bail reform and became a full-time staff organizer in early 2017.

Not long after that, a friend suggested that she take on Dilan. She was on her way to work one day when she received a text from her buddy.

The friend came over to her Bushwick apartment the next day while Salazar was doing laundry. They talked about the race, and how they felt the incumbent was in the pocket of the real estate lobby. They both agreed there was a clear opening for a challenger. In 2016, Debbie Medina took on Dilan and garnered more than 40 percent of the vote even after she admitted to beating her son with a belt.

“I agreed it was really critical someone run against Dilan,” she said. “He said, ‘It’s you, you have to run.’ And he made a compelling case, but I still was more than hesitant. I just didn’t think I could quit my job.”

More friends began to advocate for her to run, including her now deputy campaign manager, Mike Kinnucan.

“I said it was really a key year in New York State politics and no one else was going to step up and do it,” Kinnucan said at their campaign headquarters.

She eventually agreed and announced her run in April.

Despite her political work, campaigning has not come naturally for Salazar, who describes herself as a little introverted.

“It was an adjustment to become a full-time community organizer in the first place as somebody who’s naturally shy,” she said. “And if that experience was learning how to swim then the experience of running for office is like being thrown in the deep end.”

Kinnucan said like the Ocasio-Cortez race they could out hustle their opponent and connect with people who may have never voted in a State Senate race before. 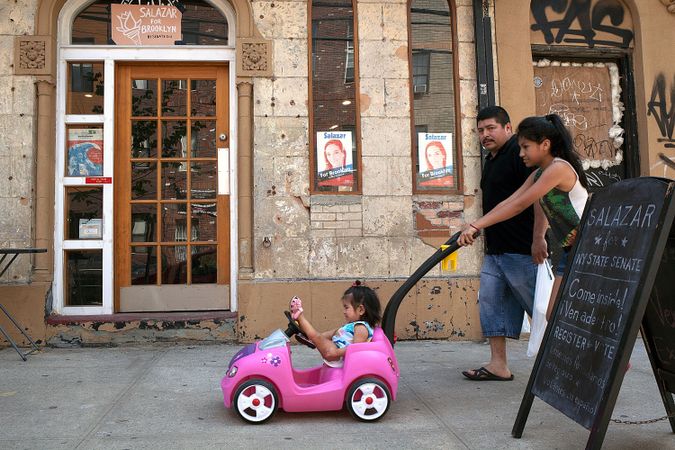 “Just so talking to people who may not think state politics matters to them and saying, ‘We’re here for you we want to here your concerns’ is really important,” he said.

“So we’re running a very, very strong field program, which just means every single night we have volunteers and Julia talking to their neighbors about issues facing the district.”

Salazar greeted some more young people as they came into the office before heading into the streets to hand out flyers near a busy subway intersection at the Bushwick-Bedford-Stuyvesant boarder.

She greeted pedestrians while walking next to a giant mural of Frida Kahlo. Workers poured out of the elevated station, down the stairs into the muggy Brooklyn Street.

Salazar handed out palm cards with a gracious persistence. She took off her grey blazer, exposing a tattoo of a large black and white rose on her back.

She approached a young man with a nose ring and tattoos running up both his arms while he stood next to his bicycle. 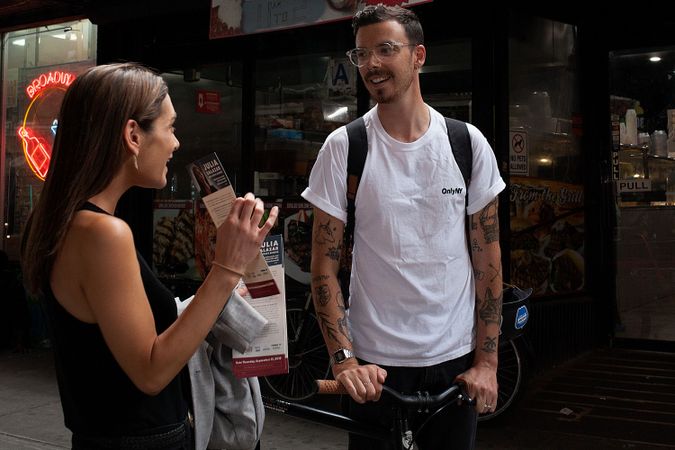 “I already have one of those,” he told her with a smile after she offered the flyer. “Keep it for someone else.”

She headed back to the headquarters to pick up more materials before wading out further into the district.

Dilan’s office did not return a request for comment.