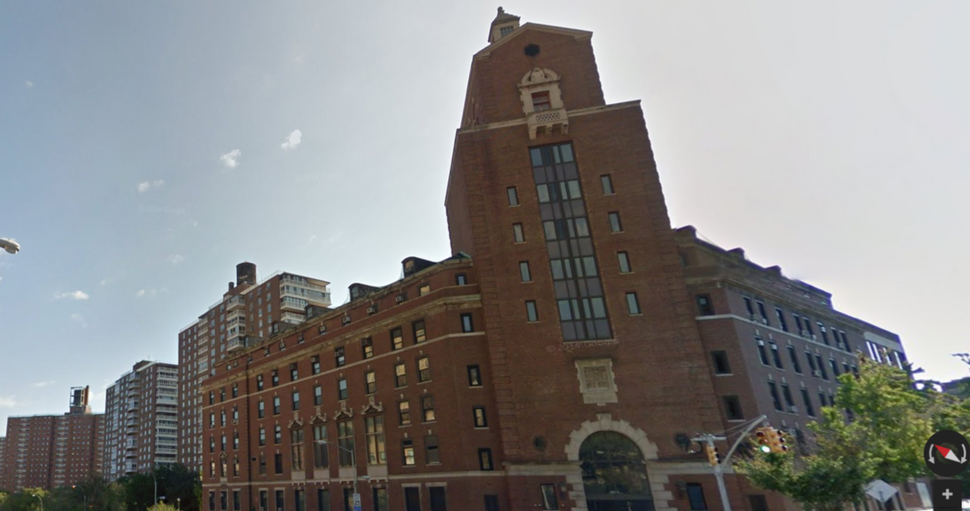 In 2015, Union Theological Seminary, a venerable Protestant institution in Manhattan, announced it would be opening up its campus to luxury condominium development to help pay for $125 million worth of repairs and upgrades. In late 2017, after prodding from a local community group, the school pledged $5 million to help keep local residents from being priced out of their neighborhood.

That community group also asked the Jewish Theological Seminary, which across the street from Union, to do the same thing.

JTS had sold two parcels of land to help pay for a new, state-of-the-art library and residence hall. One of the deals, with the developer Savanna, yielded $96 million. The group says that although JTS doesn’t have a legal responsibility to provide community funding, they have a moral responsibility to help their neighbors. Yet JTS is stonewalling them, the group said.

“We can’t even get to first base with JTS,” said Harry Schwartz, a longtime urban planner in New York City and a leader of the Morningside Heights Community Coalition. “UTS admits that they’re going to have an effect on the neighborhood. But JTS denies this, and denies any responsibility for the Savanna building.”

JTS, located in Manhattan’s Morningside Heights neighborhood, is building a new library that will also host a residence hall. The facility will allow the seminary to digitize and properly store its trove of nearly 36,000 rare books. The dorm is set to have housing enough for 150 students. JTS has spoken of its “21st Century Campus” project as a way to make JTS a more modern hub for research with an improved library, and a center for Jewish scholarship with upgraded conference spaces. The digitization project, a JTS spokesperson said, is geared toward making its legendary Judaica collection more accessible to people around the world. The spokesperson asked to remain anonymous.

The Morningside Heights Community Coalition formed several years ago in response to area institutions’ plans to sell real estate assets to fund new buildings and other improvements. In 2016, after JTS had announced the sale of its property on 122nd Street to Savanna, the MHCC said in a report that the area was at risk of “overdevelopment.”

Savanna unveiled its planned condo tower in April. With 32 stories and at nearly 350 feet, it will be one of the tallest buildings on Manhattan’s west side — about as tall as the tower at the nearby Riverside Church, the tallest church in the country.

The area is already one of the most rapidly gentrifying neighborhoods in upper Manhattan: A 2014 report from Douglas Elliman found that the average sale price of apartments in Morningside Heights rose by over 50% between 2004 and 2013. Residents and members of the MHCC are concerned that Savanna’s tower — it is set to have 170 luxury units — will contribute to gentrification, increasing demand to live in the already-coveted neighborhood and enabling landlords to raise rents, which could force longtime residents to move away. They say that JTS owes support to the neighborhood it has been in for 130 years.

“They don’t have a legal responsibility, but more of a moral responsibility to give back to the community,” said Dave Robinson, a member of MHCC’s executive committee and Morningside Heights resident since 1990.

The MHCC ideally wants JTS to sign what’s called a Community Benefit Agreements. These deals are often legally binding and create a pool of money to be used for education, affordable housing development, and social and health care programs.

In an email, a spokesperson for JTS said that the proceeds from the seminary’s property sales “are being invested in the 21st Century Campus project and the larger JTS community.”

“JTS has been meeting with the Morningside Heights Community Coalition for the last couple of years and they have proposed a variety of ideas of how to be further engaged in the community, financially and otherwise,” the spokesperson wrote. “Those conversations are ongoing.”

Yet Schwartz said that when he tried to speak to JTS’ board chairman, the lawyer Alan Levine, about creating a CBA, Levine said that he would refuse to even meet with the MHCC if they wanted to discuss a CBA.

“He was pretty clear on that,” Schwartz said. “We would not be at the table if that’s what we wanted to talk about.”

Other area institutions have made the kind of pledges the MHCC is looking for. Besides UTS, Schwartz says that St. Luke’s hospital, which sold one property for nearly $30 million in 2015, is in talks with the MHCC about a possible funding agreement. A spokesperson for UTS said the seminary has not decided how to allocate the $5 million it has pledged to the community. The spokesperson said there is no consensus yet on who will control how the money is spent.

In 2009, Columbia University signed a CBA before starting construction on its 7 million square-foot Manhattanville campus, just north of JTS. They pledged to invest $150 million in the community, and the deal created the West Harlem Development Corporation, which administers Columbia’s funds. Since 2011, the WHDC has doled out $13.3 million dollars, chiefly to fund education and community facilities.

The benefits of community funding deals like CBAs go both ways, according to Kofi Boateng, director of the WHDC.

“To the extent that a community sees you as a good neighbor, you are allowed to live in peace, and therefore achieve your own mission in peace,” said Boateng. “No one wants to run an institution where people are always protesting you as a bad neighbor.”

JTS says it is already that good neighbor. They allow residents to use its library for free, the spokesperson said, adding that its students volunteer in area charities, like soup kitchens and homeless shelters, and have held voter registration drives. The spokesperson said that the seminary had discussed opportunities for community outreach with the MHCC, such as inviting neighborhood schools to the library once it is open.

Schwartz questioned whether those efforts are sufficient.

“They say our students are active in local institutions like soup kitchens. And that’s probably true, but that’s the students, not the organization,” he said. “Is access to a library comparable to helping out with local services?”

Legally, JTS is not bound to offer services or funding to the neighborhood. For one, the Savanna project no longer belongs to JTS. Savanna also has no legal obligations to the community. Often in major residential projects, New York City rules stipulate that developers have to set aside a certain number of apartments for affordable housing. But those rules only apply if the developer got the property’s zoning changed, to allow for a taller building, or if they’re using money from the city. The property JTS sold to Savanna is zoned for as-of-right development, meaning Savanna is legally allowed to build whatever they want there. But, Schwartz and Robinson say, JTS still has a right to serve the community its faculty and students live in.

“The leverage we have comes from a mix of a moral appeal to religious institutions, which we think should have a commitment to advancing social justice at the same time that they are advancing their own interests,” said Robinson. “And, the fact that people in the community really want this.”

Schwartz added that he is not hoping for funding on the level of Columbia’s massive pledge. The university has a $10 billion endowment. JTS, as a religious institution, does not have to disclose its total endowment. According to data from Peterson’s Databases, JTS’ endowment in 2017 was a little over $100 million. Still, Schwartz said, he is hoping for something proportionate.

Robinson suggested that JTS has not agreed to funding because it has not faced the same kind of pressure from alumni and students to engage with its community as UTS has. When UTS announced its plans to co-develop a campus property into luxury apartments, over 200 students and alumni signed a letter protesting the project.

“UTS is sort of more explicitly an institution whose mission is advancing social justice,” he said. “Not that JTS doesn’t do some of that. But they’re primarily there to train new Jewish leaders.”

According to Boateng, all major institutions need prodding in order to commit large sums of money to their community.

“A developer sees a CBA as an additional cost,” he said. “No developer will willingly raise their hand and say here, who will sign with me. You gotta get community residents to make some noise.”