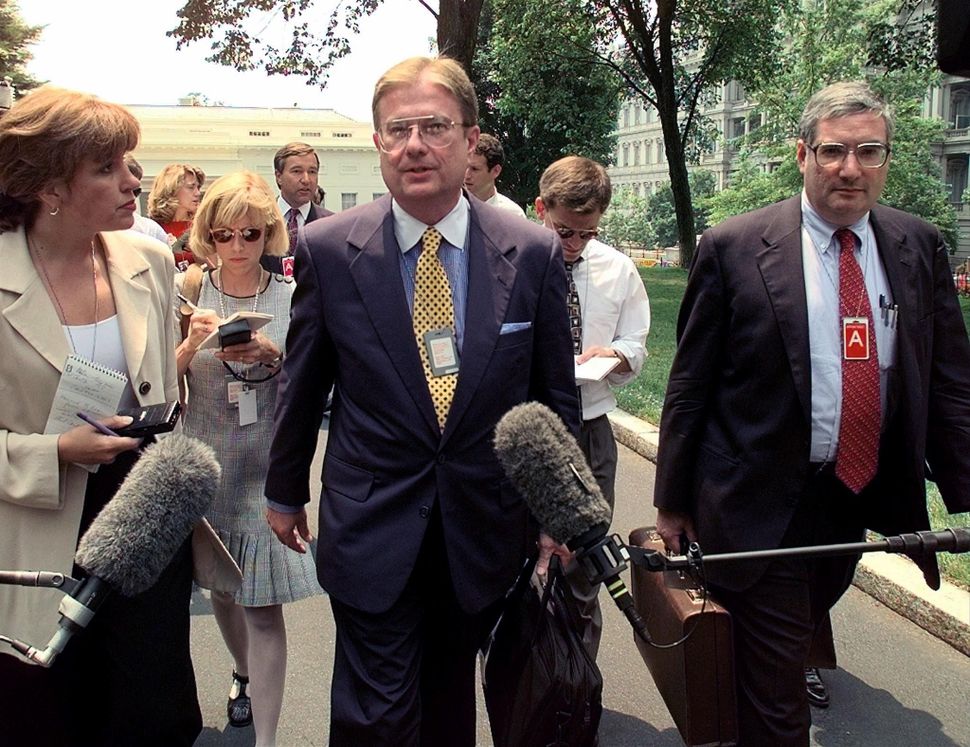 A prominent Jewish-American philanthropist was delayed for security questioning at Ben-Gurion Airport this week after a pro-Palestinian pamphlet was found in his suitcase.

The incident involving attorney Meyer Koplow took place on Sunday and has drawn strong criticism from the American-Jewish community in recent days.

A senior Israeli official told Haaretz that the questioning took place because of the discrepancy between Koplow’s “Zionist activities” and the English-language, pro-Palestine pamphlet found in his baggage.

Koplow, an attorney from the New York area and also chair of Brandeis University’s Board of Trustees, arrived in Israel last month to visit relatives. He has a sister in the settlement of Ma’aleh Adumim, he told Haaretz, and a son who frequently visits Israel with his family. “I visit Israel very often,” he said. “I’ve lost track of how many times I’ve visited – probably close to 20. My first visit was in 1969.”

Many of his visits over the years were bound to his philanthropic support of different Israeli institutions. In 2016, he donated millions of dollars to the AMIT school network, which is affiliated with the religious Zionist community. He has also donated to Shaare Zedek Medical Center and the Hebrew University in Jerusalem.

During his most recent visit, Koplow decided to also devote four days to meetings with Palestinians in East Jerusalem and the West Bank. He did so by joining Encounter, a program that organizes meetings between Jewish-American community leaders and Palestinians. Koplow, a past president of an Orthodox synagogue, said he joined Encounter after one of his sons participated and told him, “Aba, you will find this interesting.”

During a visit to Bethlehem with Encounter, Koplow said he was handed a Palestinian propaganda pamphlet in English. “I immediately saw it was propaganda and not real journalism, but I thought it would be interesting to read, intellectually, so I took it to my room, read a bit, and then tucked it in my bag,” Koplow explained. Koplow said he had forgotten about the pamphlet until his questioning at Ben-Gurion Airport.

On Sunday morning, he arrived at the airport in order to board his return flight to the United States. He had no problems passing through security, check-in at the El Al desk and passport control.

Koplow was on his way to the gate when his name was suddenly called on the airport’s PA system. “They asked me to come immediately to the information desk, I had no idea why,” Koplow recalled. “When I got there they told me, ‘There is a security problem.’”

It transpired that the Palestinian pamphlet had been found during another search of his suitcase. Koplow was asked to wait for 20 minutes, after which a female representative of the airport security services arrived to question him.

“She asked me why I visited the territories, what was the program I participated in, who were the other participants,” he said. “I answered her questions but she kept repeating them again and again, giving me the impression she didn’t believe what I was telling her.”

Koplow said the most disturbing question raised by the security representative was, “What was I going to do with the information I learned in the territories once I returned to the United States?” Koplow said he found it hard to understand how this question related to airport security.

He waited for another 15 to 20 minutes before the representative stepped away, made a phone call and then told him he was free to go.

“I found it somewhat scary – I was concerned I would be detained or miss my flight,” said Koplow.

He added that it made some of the things that Palestinians had told him on the program “seem more credible. Whatever was intended by this questioning, I think it accomplished exactly the opposite.”

Koplow emphasized that he “is not angry at Israel” and continues to “love and admire Israel.” He is, however, worried – mostly about the prospect that he will now be “blacklisted” by Israeli authorities and face difficulties when he tries to enter the country again in the future.

“I tried to indicate that I have family in Israel and a deep Zionist connection,” he said. He added that the representative showed no interest in what he had to say.

Koplow’s son, Michael, who is policy director at the Israel Policy Forum, described the incident in a series of tweets on Monday. The tweets were shared hundreds of times and drew a range of reactions – from people who sympathized with Koplow and told of similar experiences, to others who said it was a minor discomfort that was necessary to ensure safe flights.

Meyer Koplow told Haaretz he found it hard to see how an interrogation like the one he went through could be justified on security grounds.

On Tuesday, Koplow received a call from Dani Dayan, Israel’s consul general in New York, who promised that the incident would be examined by the Israeli authorities.

“It was a very good conversation,” Koplow said. “He apologized for what had happened. He wanted to know the details. I expressed concern that I would find myself questioned every time I arrived at Ben-Gurion [Airport] in the future, and he said he would ensure that this won’t happen. I told him I wasn’t angry, but this is not what I expect of Israel.”

An Israeli official told Haaretz the incident is being examined. The official said he believed the questioning was justified, because “the questions [Koplow] found troubling were meant to verify his story and ensure security on the flight – not for reporting to any other authorities.

“It’s not a sin that he took the Palestinian propaganda materials, but the gap between those materials and the persona he presented during the first round of questioning caused a discrepancy in the eyes of the security representatives,” the official said.

In response to the report, the Israel Airports Authority told Haaretz that “Koplow’s activities and contributions are praiseworthy and we are sorry about his feelings [about the incident]. The procedure at Ben-Gurion Airport is intended to secure both the passengers and the planes.

“When his luggage was examined, a suspicion arose that the passenger was being exploited to carry something that could endanger him, the other passengers and the plane.

“The additional questioning of Koplow allowed the examination to end and ruled out the possibility that there was a danger to the flight, without any further delay to him.”