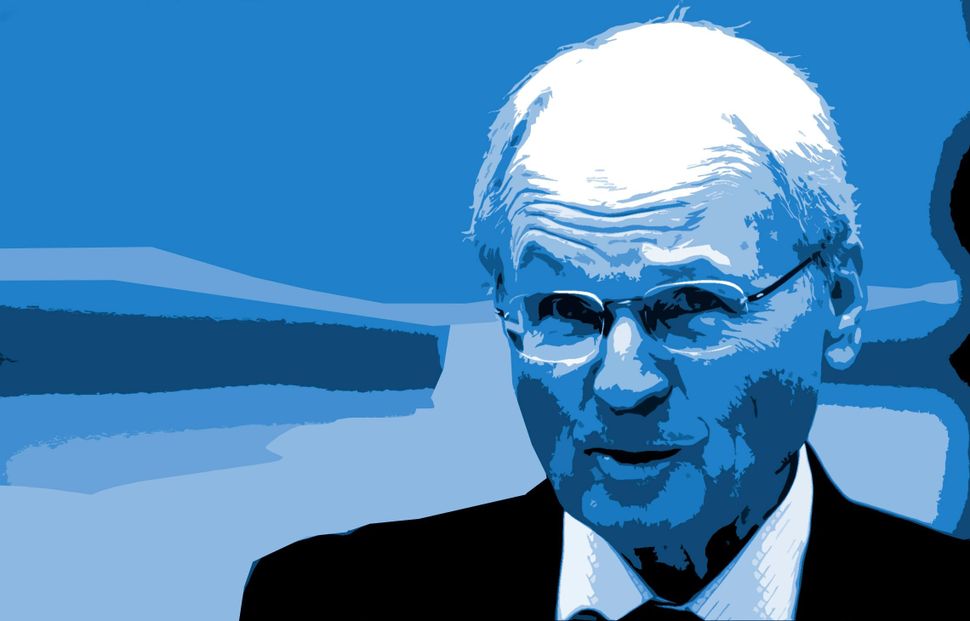 In a lawsuit filed Friday, the former executive director of the Zionist Organization of America accused its longtime president, Mort Klein, of taking secret off-the-books payments from donors, sabotaging the group’s tax exemption to hide his inflated salary, and retaliating after the former executive director blew the whistle on his alleged misconduct.

The July 26 suit also charges that a long-time board member quit in protest last year after Klein refused to abide by a decision of the organization’s investment committee, and that a second board member left over governance issues.

The ZOA fired the former executive director, David Drimer, in November 2017, days after he says he sent a letter to the office of the New York State Attorney General alleging misconduct at the organization.

In the suit, Drimer alleges that he was retaliated against for reporting suspected wrongdoing to ZOA lawyers and the attorney general, and demands $3.4 million in damages.

“Klein acted as if ZOA existed for his own benefit without regard to his responsibilities as a fiduciary of ZOA and all its members,” the complaint charges.

Reached via telephone on Friday afternoon, Klein said he had no comment on the lawsuit. The ZOA’s attorney in the matter, Cliff Rieders, said that “the allegations are frivolous and will be proven thus,” and that a press release was forthcoming.

Prior to his position at the ZOA, which he joined in 2011, Drimer worked as associate publisher of the Forward Association, the not-for-profit organization that publishes this newspaper.

Klein has been the top official at ZOA since 1994. The organization, once seen as a marginal conservative group, has grown in prominence and influence in recent years, bolstered by the support of Las Vegas casino mogul Sheldon Adelson and the advent of the Trump administration. The group’s annual gala attracts a who’s-who of conservative political figures, and Klein is seen as having an open line to the Trump White House.

Today, following the sale of the ZOA’s New York building for $38 million in 2016, the organization is financially flush, with donations of over $4 million a year and net assets of $40 million.

Yet Klein’s stewardship of the organization has been rocky, and at times beset by scandal. The Internal Revenue Service revoked the ZOA’s tax-exempt status after determining that it had missed the deadline to file its 2008 tax returns by three years. Later in 2012, the organization fired a whistleblower who had raised concerns about orders from Klein to play down the revocation of the ZOA’s tax exempt status in conversations with donors.

As ZOA worked to regain its tax exemption in 2012, retroactive filings provided to the Forward showed that Klein had received a 38% raise during the years in which the group had not disclosed its finances.

Now, Drimer’s lawsuit says that the loss of the tax exemption itself was due in part to Klein’s desire to hide details of his compensation.

In 2012, when the Forward disclosed Klein’s massive pay bump, Drimer himself, acting as the ZOA’s spokesman, justified Klein’s salary by saying that Klein had worked without pay for his first six years as national president.

In his lawsuit, Drimer says that, in fact, Klein actually had been paid during those years, though he had hidden that fact from staff and even from some board members. Drimer alleges that Klein had actually received “numerous periodic and substantial secret cash ‘gifts’ from some members of the board of directors and other donors” that were designed to compensate Klein for his work at a time when the ZOA’s bylaws did not provide for a salary for its president.

According to the suit, one of the donors revealed the existence of the payments at a board meeting, the date of which is not given. Drimer charges that the payments were kept secret from an outside compensation consulting firm the ZOA hired to set Klein’s salary. That firm advised providing Klein with additional compensation to make up for the years in which he had not been officially paid, and the ZOA took its advice.

The suit alleges that the off-the-books payments were not reported to the ZOA’s auditors, or to the Internal Revenue Service. And Drimer also claims that the payments were behind the ZOA’s loss of its tax exemption in 2012.

“One of the reasons ZOA failed to file these IRS 990 forms was that defendant Klein did not want to disclose the off-the-books payments and compensation he was receiving during those years as ZOA’s national president,” the suit claims.

Amid other alleged misconduct, Drimer charges that Klein at one point refused to move $5 million from ZOA money market accounts into the custody of an investment manager selected by the ZOA’s investment committee. In response, the suit alleges that one board member resigned, and another said he would resign over broader governance issues.

In July 2017, Drimer delivered a written whistleblower letter about misconduct at the organization to two ZOA attorneys. The exact contents of the letter are not described in the lawsuit, but presumably included some or all of the allegations listed there. The same day he delivered the letter, the board’s executive committee told Drimer that his position as executive director had been eliminated, that he had been demoted to deputy director, and that a new executive vice president would be installed over him. In the following days and weeks, Drimer was stripped of various responsibilities. He complained to ZOA lawyers that he was being retaliated against for filing his complaint. In August, the ZOA hired an outside attorney to investigate those charges.

In October, the ZOA board chair told Drimer that the outside firm had investigated, determined that he was not a whistleblower, and that the conduct he had alleged in his letter was not improper. A month later, Drimer sent a letter containing whistleblower allegations to the Attorney General’s office, and told the ZOA attorneys he had done so. Within days, he was fired.

The suit names the ZOA, Klein, and various board officials as defendants. As yet, none have filed a response to the charges.