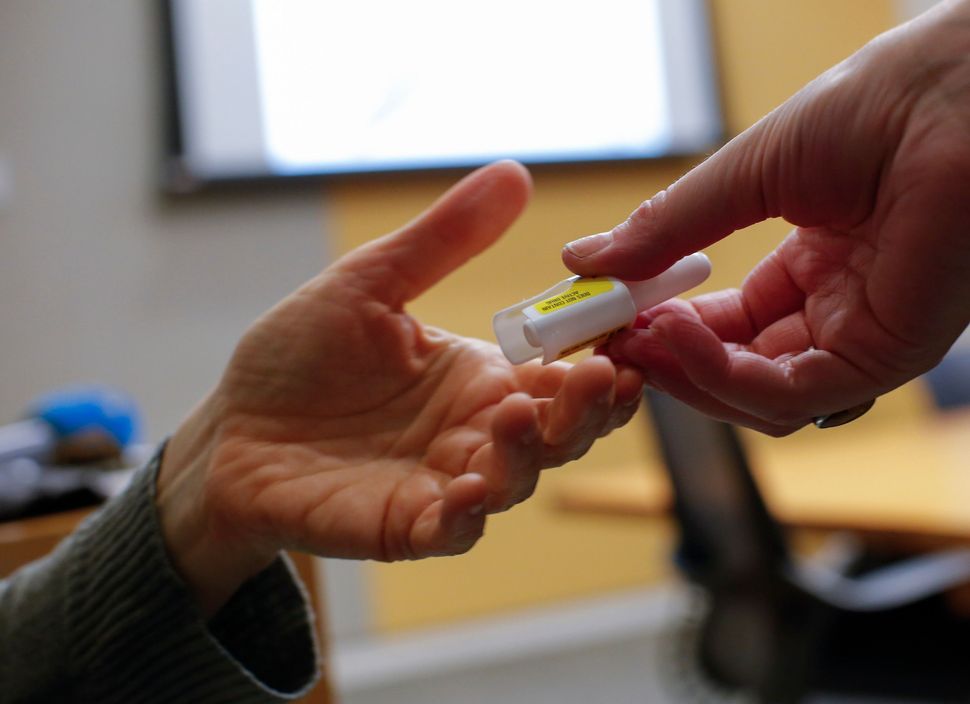 About 100 people filled the orange multi-purpose room in the back of a Jewish Community Center in the Five Towns area of Long Island last Monday evening. Men in kippot chatted with women wearing colorful tichels, or head scarves, exchanging thoughts on Israeli news and local politics. The event organizers asked people walking in the door if they had filled out the sign-in sheet.

But while the gathering looked run-of-the-mill, the topic at hand was not. It was the Five Towns Jewish community’s first training in how to use Narcan, the emergency opioid overdose spray.

David Hymowitz of Nassau County’s Department of Health and Human Services led the seminar — his 265th — with gusto. He had an answer for every question, and a laundry list of facts about opioids and their abuse that induced gasps of horror in his audience.

“I have a lot of friends who have overdosed, and they’ve been saved by Narcan,” Hymowitz said. “So at least we know that it works.”

The Five Towns is one of many Jewish communities that are recognizing just how pervasive the crisis is. The training’s organizers say that while some schools and synagogues have raised awareness about substance abuse in the past, there is still widespread stigma around substance addiction and treatment in the Orthodox community there. With overdoses a major cause of death in their county, they’re hoping to teach as many people as possible how to be prepared to confront an overdose — even one happening in their own home.

“Substance abuse crosses all lines. It doesn’t discriminate,” said the JCC’s associate director Cathy Byrne, a registered nurse. “The bigger picture is that in the past there have been great issues of denial. To be able to talk in a very open dialogue was very healthy.”

The Five Towns sits at the southwest corner of Nassau County, home to nearly 1.4 million people on western Long Island. The area, which despite its name comprises nine villages and hamlets, is about 60% Jewish, according to a report released by the UJA-Federation of New York in 2011. The report estimated that the area is home to 25,000 Jews, mostly non-Hasidic Orthodox families.

While overdoses are rare in the Five Towns, Nassau County’s overall rate of deaths from overdoses nearly tripled between 2010 and 2015, according to data compiled by the New York Department of Health. Last year, emergency responders used Narcan on people found overdosing on opiates more than 630 times. Last week, the Centers For Disease Control and Prevention reporter that a record 72,000 people died of opioid-related drug overdoses in 2017.

On July 16, Byrne and others organized a panel of experts on opioid addiction that attracted 550 residents, nearly all of whom were Jewish. Byrne said reports about dealers of opioids in nearby towns concern Five Towns residents. She added that though the problem has been flying under the radar in the Jewish community there, service providers and some educators have known people struggling with opioid addictions for years.

“We hear all the time, ‘I went in for back surgery and got hooked on my Oxycodone,’” said Byrne, who estimates that over 100 people with substance abuse issues have in the past few years come through the JCC’s various health services programs, including those for elderly people and single mothers. She says she also hears stories of student athletes who become dependent on prescription painkillers after an injury.

While opioid addiction is by no means endemic to the Orthodox community, addiction can be uniquely difficult to address for Orthodox Jews, according to Akiva Perlman, a clinical supervisor for Amudim, a social services provider that caters to Orthodox families.

“You’re dealing with issues of stigma that are a lot more pronounced than you’d have in other communities,” said Perlman, who is Orthodox himself.

The greatest barrier to addiction treatment is often the specter of losing face before the community, he said — a major problem even in non-Hasidic Orthodox enclaves.

“There’s a great deal of pressure that’s placed on keeping a family name intact, and keeping a reputation intact,” Perlman said. “That’s in most of our [Orthodox] communities.”

Throughout Hymowitz’s nearly 90-minute presentation (“Get the SKOOP: Skills and Knowledge on Opioid Overdose Prevention”), attendees of all ages asked questions about their kids. Can they bring minors to a training? (Yes.) Can the minors carry Narcan? (Not legally.) If two minors are using, and one overdoses, and the other calls 911, will the caller get arrested? (Not if they don’t have a felony amount of narcotics.) How much is a felony amount of narcotics? (Google it.)

“It’s important to know what’s going on in kids’ worlds,” said the associate principal of the Hebrew Academy of Nassau County, Barbara Deutsch, who attended the presentation and received a Narcan kit. “Responsible parents know what their kids are going to be exposed to,”

The crowd sometimes gasped as Hymowitz doled out his more potent facts. Real estate brokers now tell homeowners to clear their medicine cabinets before open houses, in case a “prospective buyer” wants to raid the place for pills. You should wear gloves when responding to an overdose, because some synthetic opioids are so strong, they can be absorbed through the skin. Carfentanil, a synthetic opioid now increasingly common in the United States, is so toxic that three kosher-salt-sized rocks of the drug is enough to kill 72 people.

“You still want to go through the training?” Hymowitz deadpanned.

But the group’s interest never seemed to wane.

Rabbi Yaakov Trump, an associate rabbi at Young Israel of Lawrence-Cedarhurst, said that it’s hard for any issue to gain traction on a community-wide level in Jewish areas, since schools and synagogues have their own priorities.

“The problem is that it doesn’t help to get every little school to do its own thing, or for each school to set its own policy,” said Trump, adding that he hopes to create some kind of community-wide policy for identifying and addressing substance abuse.

At the end of the meeting, all 75 Narcan kits that Hymowitz had brought along were taken home with attendees. Byrne said that she hopes to do further trainings in the fall for teenagers, per the request of many parents who were trained last Monday. She added that she was “impressed” to see different stripes of community leaders — board members, rabbis, social workers, educators — all engaged in the same seminar under the same roof.

“It’s a fine line, working through the political ropes,” Byrne said. “But I think we’ve made great inroads in opening the doors.”