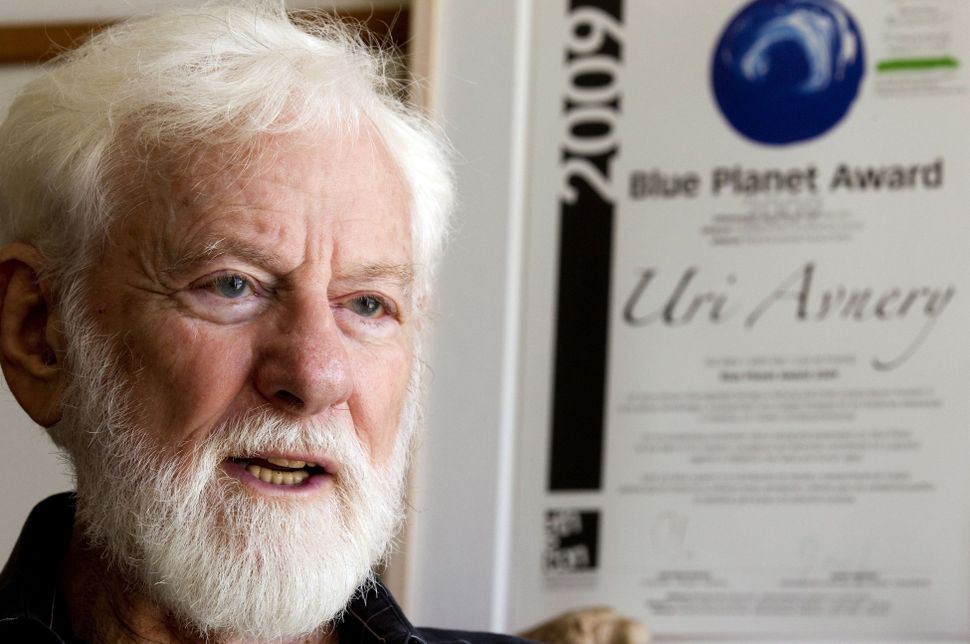 Israel lost its most durable, most persistent peace activist and taboo-breaker on August 20 with the death in Tel Aviv of journalist Uri Avnery. He was 94, and had been unconscious since suffering a massive stroke on August 4.

Avnery is best remembered as the elder statesman of Israel’s radical left, a perpetual protester and demonstrator against Israeli policies toward the Palestinians. In fact, though, that was the last of Avnery’s four distinct careers. Starting in his teens as a right-wing polemicist and follower of rightist firebrand Vladimir Jabotinsky, he became by turns the owner and editor of a muckraking sex-and-scandal tabloid, a crusading civil-libertarian Knesset member and finally the stormy peace activist of legend.

For all that, he lived long enough to see some of his most radical ideas become conventionally mainstream, if not yet reality. Among them: separation of state and religion; creation of a new, post-diaspora Israeli identity; Israeli integration into a Middle East regional alliance; and Israeli-Palestinian peace based on two states living side by side.

He was born Helmut Ostermann in Germany in 1923, the youngest child of an affluent Jewish family. They moved to British-ruled Palestine in 1933, fleeing the new Hitler government. Four years later, his father’s fortunes collapsed due to bad investments, forcing the young Helmut-Uri to leave school after seventh grade and go to work full-time.

At 15 he joined the Irgun Tzva’i Le’umi, the underground militia of Jabotinsky’s Zionist Revisionist movement, forerunner of today’s Likud. Too young to fight, he was assigned office duties and eventually became editor of an Irgun magazine. He quit the Irgun in 1942, openly protesting its attacks on Arab civilians, but remained with the Revisionists.

Within the Revisionist camp he came to be identified with a far-right faction known as the Young Hebrews or Canaanites. They rejected Jewish religion and peoplehood and embraced a version of European romantic nationalism, envisioning Israel as a new, muscular Hebrew nation, heir to the mythic traditions of pre-biblical, pagan Israel-Canaan. In 1946, Avnery helped form a new group, the Semitic Region, that envisioned a Hebrew state joined in a regional confederation with neighboring Arab states, cousins of the Hebrews.

Notwithstanding his radical beliefs, he fought in Israel’s War of Independence as a commando and a squad officer, eventually suffering a near-fatal injury to his abdomen and groin. During the war, he had written regular dispatches on life at the front for the newspaper Haaretz. While convalescing, he edited them into a book, “In the Fields of Philistia 1948.” It became a runaway bestseller and made him a celebrity.

In 1950, he took a step that would set his course for the next seven decades: With his book royalties he purchased a failing arts weekly, Ha’olam Hazeh (“This World”), and turned it into a countercultural sensation. Part gossip-and-scandal tabloid, part girlie magazine, part muckraking political gadfly, it was like nothing Israel had ever seen. It titillated readers with lurid sex scandals and nude photos, exposed them to the hidden world of Tel Aviv nightlife and gleefully uncovered official abuse and corruption — all while thundering nonstop against high-handed, self-righteous conduct by Israel’s socialist ruling establishment and its leader, Prime Minister David Ben-Gurion. The establishment reviled it as “pornography,” but soldiers, truck drivers and bohemian Tel Aviv café society ate it up.

The 1950s saw Avnery picking continual fights with Ben-Gurion and his young protégés, notably Moshe Dayan and Shimon Peres. He waged crusades for Arab-Israeli and Sephardi-Israeli equality. In 1956, he revived his Semitic regional alliance notion, joining with several other prominent writers to form what they called Semitic Action. This time, though, the federation would emerge in stages, starting with a confederation between Israel and an improbable Palestinian state in the West Bank and Gaza, then respectively ruled by Jordan and Egypt.

In the parliamentary elections of 1965, fearful of a new libel law aimed at him, Avnery formed his own Ha’olam Hazeh political party and ran for Knesset. His platform was basically the magazine’s editorial agenda, sans nude photos: protecting civil liberties, separating religion and state, fighting government corruption, defending Sephardi-Israeli and Arab-Israeli civil rights. And opposing that libel law. He won enough votes for one seat in the 120-member parliament.

He was reelected in 1969, this time with two seats. In the interim, the Six-Day War in 1967 had turned him into a passionate, single-minded advocate of what’s now known as the two-state solution. With Israel now controlling the two Palestinian enclaves, his two-state pipe dream of 1956 suddenly seemed — to Avnery, if few others — to be plausible, perhaps even optimal. What’s more, the Palestinians appeared — again, in Avnery’s eyes — to have a viable, authoritative leadership under Yasser Arafat’s Palestine Liberation Organization.

Palestinian statehood and cooperation with the PLO are mainstream ideas in Israel today, but in the first years after the 1967 war they were enormously unpopular. Avnery suffered the brunt; he wasn’t the only Israeli to endorse the two-state notion, but he was the only one who had been a folk hero with a mass following, many of whom now felt betrayed. He received a flood of hostile mail, his office was firebombed and he suffered repeated physical assaults.

In 1976, Avnery and eight allies filed a defamation lawsuit against a Sephardi organization that had called them “anti-Zionist.” The court found in favor of Avnery and company. Years after, Avnery told me half in jest that he was “the only Israeli (ignoring his co-plaintiffs) with a court order certifying that I’m a Zionist.”

Avnery devoted himself to the Israeli-Palestinian peace cause almost single-mindedly for the next half-century, right up until his fatal stroke. For nearly two decades he participated in a series of attempts, with varying success, to unite the squabbling grouplets on the pro-peace left into an effective political party. One of the more successful efforts, the Sheli party, landed Avnery back in the Knesset in 1979 for a two-year stint, sharing a four-year term with another Sheli leader. Ultimately, though, Sheli failed, like other unity attempts before and yet to come. The reasons: Clashing egos. Disagreements over how much Israeli compromise to demand. Failure to grasp the depth of popular rage over Arab terrorism and eliminationist rhetoric. And, not least, Avnery’s stubborn refusal to endorse his colleagues’ socialism.

Failing reelection in 1981, Avnery began his fourth and final career, as an extra-parliamentary peace activist. He started with a bang: During Israel’s first Lebanon war in the summer of 1982, he entered besieged West Beirut and visited Yasser Arafat, together with a photographer and a young reporter from his magazine. It’s often described as Arafat’s first meeting with an Israeli, though the Palestinian leader had met two years earlier with the head of Israel’s Communist Party and an ally. It did, however, result in Arafat’s first-ever interview with an Israeli publication. In it, Arafat called for an Israeli return to the pre-1967 borders, creation of a Palestinian state and mutual recognition between Palestine and Israel.

Back in Israel, a parade of Knesset members and cabinet ministers called for Avnery to be tried for treason. The state attorney general declined, noting that there was no law against meeting with Arafat. The following year, Avnery visited Arafat again, this time at the PLO’s new headquarters in Tunis, and accompanied by two of his fellow ex-Sheli lawmakers. Attacks on Avnery now reached a crescendo. The Knesset finally outlawed such meetings in 1986.

The election of Yitzhak Rabin as prime minister in 1992 was a joyous time for the left, but Avnery had no love for Rabin’s Labor Party. That December, following a wave of terrorist attacks, Rabin rounded up 1,300 Hamas members and expelled 415 of them to Lebanon. Avnery, after failing to enlist the Peace Now movement to help fight the expulsion, gathered radical allies and formed the Jewish-Arab Committee Against Expulsion. He set up a protest encampment outside the prime minister’s office and camped out with his wife Rachel for nearly two months, until the newly-inaugurated American president Bill Clinton pressured Rabin in February into shortening the expulsion to one year.

When the deportees returned in February 1994, Avnery was invited by Hamas to a welcome-home celebration in Gaza. In his remarks there, he declared that he stood before them as an “Israeli patriot” and urged Hamas to recognize Israel and help work for a two-state peace agreement. He continued meeting with Hamas leaders and pressing them to moderate for the next quarter century.

Rather than dissolve his anti-expulsion committee, however, he renamed it Gush Shalom, the Peace Bloc, and became a full-time protester. His Gush Shalom regularly showed up to protest at settlement construction sites, obstruct the West Bank separation wall and protest the Gaza embargo. In between, he wrote column after column defending and sometimes rethinking his views. They appeared every few weeks in Haaretz, and several times a week on the Gush Shalom website.

His last column, posted on the Gush website on August 4 — the day of his stroke — is framed as a critique of the new Jewish nation-state law, but now reads poignantly like a prescient farewell address: It sums up his evolution as a Jew, Hebrew and Israeli, harking all the way back to his teen years in the Irgun and among the Canaanites.

“We are not temporary tenants in this country, ready at any moment to go and join our brother and sister Jews around the globe,” he wrote. “We belong to this country and are going to live here for many generations to come, and therefore we must become peaceful neighbors in this region.”

J.J. Goldberg is editor-at-large of the Forward, where he served as editor in chief for seven years (2000-2007). Contact him at [email protected] or on Twitter @jj_goldberg