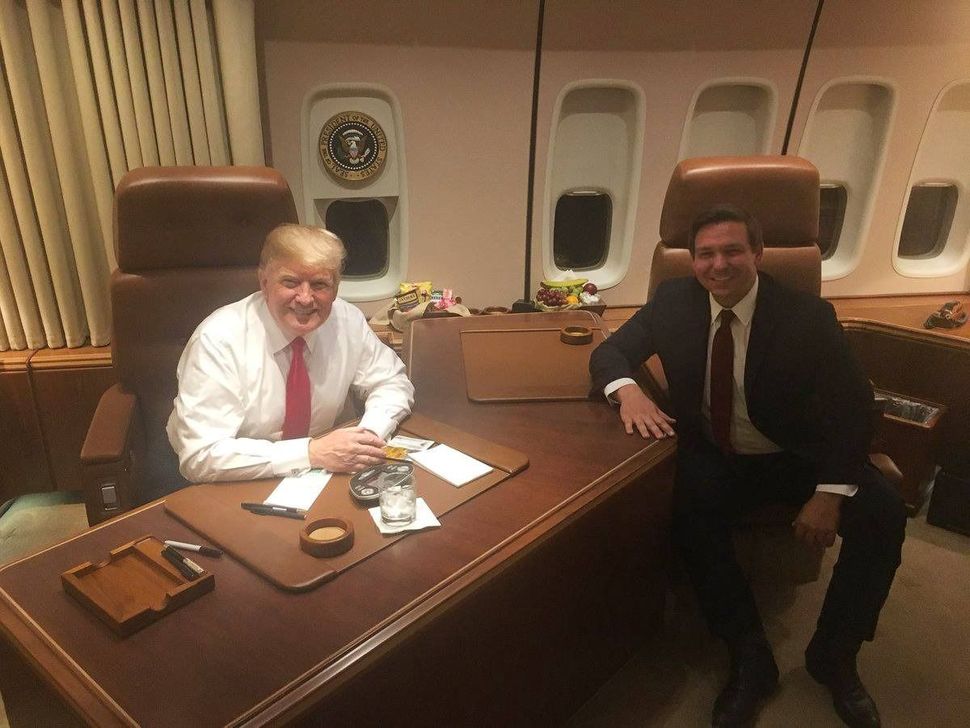 DeSantis, 39, who rocketed to the front of the race after Trump endorsed him at the end of June, beat establishment favorite Adam Putnam in the Republican primary on Tuesday. DeSantis will take on Democratic nominee Andrew Gillum, the progressive mayor of Tallahassee who would become the state’s first African-American governor.

DeSantis immediately stirred a hornet’s nest of controversy by warning Florida voters not to “monkey this up” by voting for Gillum, which many took to be an implicit racial slur.

“In the handbook of Donald Trump, they no longer do whistle calls,” Gillum hit back at DeSantis in an interview with Fox News Wednesday evening. “They are now using full bullhorns.”

It remains to be seen if the racial controversy will dim the appeal of DeSantis with the likes of Adelson and scandal-tarred GOP donor Elliott Broidy.

Soon after Trump’s endorsement, cash started pouring into the super PAC supporting him from Jewish donors and Israel hawks. The PAC, Friends of Ron DeSantis, has brought in more than $13 million since January.

Congressman Ron DeSantis, a top student at Yale and Harvard Law School, is running for Governor of the Great State of Florida. Ron is strong on Borders, tough on Crime & big on Cutting Taxes – Loves our Military & our Vets. He will be a Great Governor & has my full Endorsement!

“I think, specifically, President Trump’s endorsement helped provide a lot of grassroots funding to the race, but [DeSantis has] also taken a lot of corporate and special interest money,” said Aaron Scherb, the director of legislative affairs with the non-partisan watchdog group Common Cause. “They’re never contributing just out of the goodwill of their hearts.”

Scherb added that some donors may also see holding the Florida governor’s mansion as key to influencing redistricting after the 2020 census. “There are a couple of key swing districts in Florida, at least four or five, that could potentially determine control of the House,” he said.

Given Florida’s large Jewish population, it’s not surprising that so many Jewish machers based in the Sunshine State were providing support.

Laura Perlmutter — the wife of Marvel Entertainment chairman and Trump ally Ike Perlmutter, who was outed in a ProPublica investigation as secretly shaping policy at the Department of Veterans Affairs — gave two donations in July worth a total of $500,000.

And Cherna Moskowitz, whose late husband Irving gave millions to support West Bank settlements, donated $100,000 in January and another $50,000 in July.

But many key DeSantis backers came from outside the state’s borders. The Las Vegas-based Adelson and his wife, Miriam, both gave $250,000 on July 25. And Silicon Valley real estate mogul Carl Berg kicked in $100,000 on June 29.

DeSantis, a veteran of the Iraq War, makes no mention of foreign policy or Israel on his campaign site. However, he did travel to the country for the opening of the U.S. embassy in Jerusalem in May, and has met with Israeli Prime Minister Benjamin Netanyahu as a member of the House Foreign Affairs Committee.

The DeSantis campaign did not return an immediate request for comment, but his spokesman told the Tampa Bay Times in May that governing in Florida would give him a “unique position” on Israel because of the number of Jews in the state and the many business ties with the Middle East country.

Gillum’s campaign did not return an immediate request for comment.