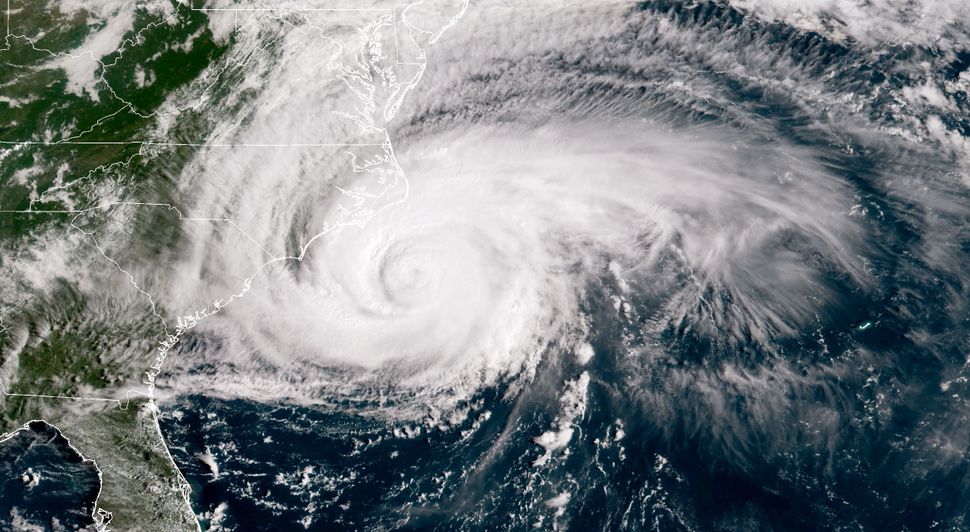 Hurricane Florence bears down on North Carolina on Sept. 13, 2018. Image by NOAA via Getty Images

With Hurricane Florence heading straight for Wilmington, North Carolina, Rabbi Moshe Lieblich huddled with his congregation for the second day of Rosh Hashanah on Tuesday.

But as the service began, he quickly realized that so many congregants had fled the storm’s path that he couldn’t get a minyan together.

“People really panicked,” the co-director of Chabad of Wilmington told the Forward Thursday morning while the front of the Category 2 storm started to batter the coastal city. “There was a lot of fear and nerves in the community the past couple days.”

About 60 people came for services on Monday, but as news spread that the storm at that point had become a Category 4 monster, families headed out of town, even without a mandatory evacuation notice.

The next day, less than 15 congregants showed up.

Lieblich, whose story was first reportd on Chabad, is staying put with his wife and five children. He said they are inland enough to avoid major flooding and are well stocked up on water, batteries and fuel for their two vehicles.

More importantly, he wants to be there for those in the community who decided to batten down the hatches and ride out the hurricane.

“The community does trend elderly and that’s why I tried to get [contact information for] as many people who stayed put,” the rabbi said. “I have both my cars topped off with gas. If the situation becomes really difficult and we have to move elsewhere or bring someone else here, if that is what it takes, we are in a position to do that.”

Even rabbis who are more inland are taking the storm seriously and offering help to those on the coasts.

“I’ve been in touch with four of my colleagues along the coast and offered them to stay at my house,” said Rabbi Fred Guttman of the Reform congregation Temple Emanuel in Greensboro. “If you’re on the coast or in a low-lying area, it’s very serious. The rain will be more serious than the wind.”

The latest projections show the strongest winds hitting Wilmington Friday morning, with a storm surge up to 15 feet.

North Carolina Gov. Roy Cooper reiterated that even though the hurricane had been downgraded, people in evacuation zones should not try to stay put.

Governor Cooper in Kinston today: “We want to continue to send the message that this monster of a storm is not one to ride out.” pic.twitter.com/osAmqC0lIC

The storm’s center is expected to pass through Wilmington before heading into South Carolina just north of Myrtle Beach on Saturday morning.