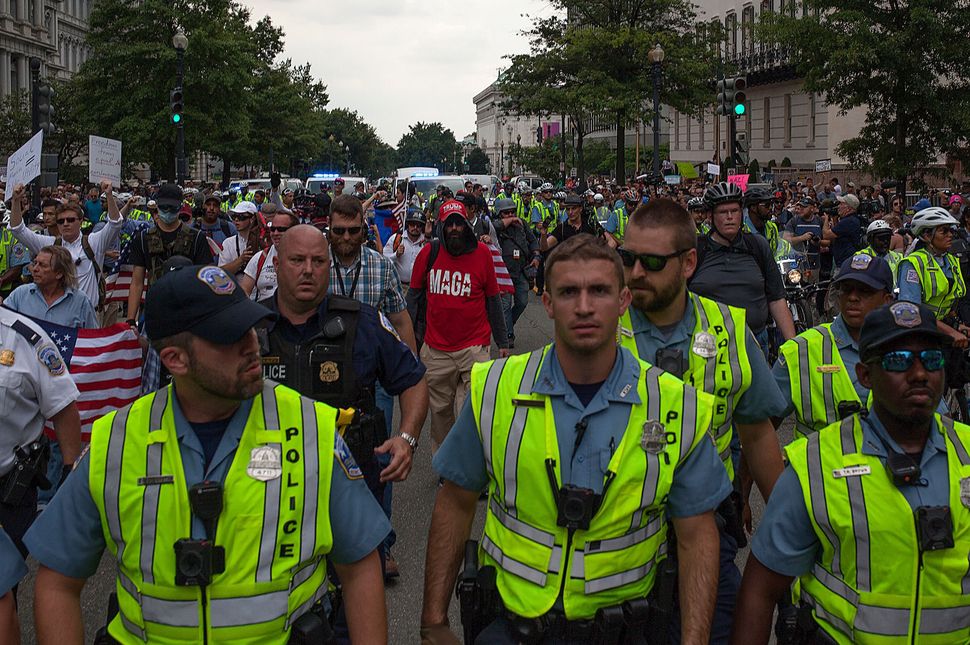 White nationalists march in Washington D.C. as part of the “Unite the Right 2” rally on Aug. 12, 2018. Image by Ben Fractenberg

Trump’s campaign has still not returned gifts from at least three white nationalists after the Forward exclusively reported their donations on July 30. The president’s 2020 election operation still has hundreds of dollars from those individuals, FEC records show, and one of the extremists, former Aryan Nations leader Morris Gulett, gave $100 to the Republican National Committee on Aug. 1.

“I certainly think after the reporting, they’ve been on notice,” said Stephen Spaulding, an attorney with the nonpartisan government watchdog group Common Cause, referring to the Trump campaign and the RNC.

“It’s on them to explain to the American people why they’ve taken the money and why they haven’t returned it,” he added.

Apart from Gulett, the Trump campaign accepted over $260 from “Nazi stage mom” April Gaede, whose twin daughters were in a white nationalist band named after a chemical used to gas Jews during the Holocaust.

The campaign also took a small donation from alt-right provocateur James Allsup, who marched in Charlottesville with far-right protesters last year and later joined the Republican Party as a precinct committee officer in Washington State.

To be fair, the donations are relatively small, amounting to a hundreds dollars out of millions raised. Trump’s reelection campaign announced on Oct. 15 they took in more than $18 million from July through the end of September. The majority of the money came from donors giving $200 or less.

But the Anti-Defamation League argued the gifts should have been returned once the donors were identified as white supremacists.

“No political party should accept political donations from extremists, hate groups, and those who advocate anti-democratic principles, period,” ADL spokesman Todd Gutnick said in a statement. “Once a funder is accurately identified as an extremist or a member of an organized hate group, candidates for political office should not accept funding from them.”

The Trump campaign has not responded to multiple requests for comment on the issue dating back to July. The RNC also did not respond to a request to comment on Oct. 15.

FEC filings, the latest of which were due Oct. 15, would have shown if they had returned the money.

While their donations were relatively tiny, none of the white nationalists seem to have ever given to a federal campaign before, according to FEC records.

“It appears the extremist and white supremacist factions of our country have been emboldened and making their voices heard by not only marching in the streets but donating to candidates and political parties,” Spaulding said.

Gulett — who the Southern Poverty Law Center says practices an anti-Semitic theology called Christian Identity and ends his sermons with a Nazi salute — has given three donations to Trump since December 2017 and then gave to the RNC just two days after the original Forward story was published, records show.

Gulett created his racist church during the height of Trump’s presidential run, according to the SPLC.

“The ideas that Donald Trump articulates about America now and where America is going as opposed to where it should be going in my opinion is admirable from a Patriotic Nationalists point of view,” Gulett wrote, according to the SPLC. “Without a doubt the Communist Party lead by Hillary Clinton and the Jew Bernie Sanders must be stopped.”

Gaede and Allsup’s donations were sent to Trump’s general election fund, but were redirected by the campaign to to be available for the 2020 Republican primary instead. Primary elections will still be held even if Trump does not have an in-party opponent.

At least nine white supremacists and “alt-right” candidates ran as Republicans in both federal and state elections., according to a Forward analysis.