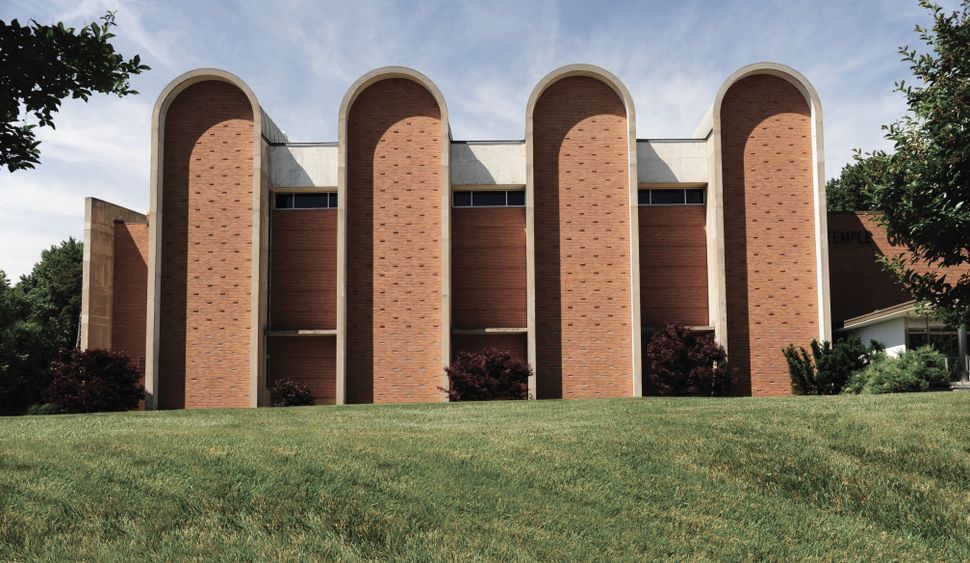 The Baltimore congregation was in crisis, less than two days away from deciding whether to fire their senior rabbi of nearly two decades for unspecified violations of the Reform movement’s ethical code. The movement’s rabbinical association had already suspended him. Now the pressure was on his synagogue to terminate him, since no other Reform congregation had ever employed a suspended rabbi.

“Simply put, a ‘no’ vote [to keep the rabbi] rejects 165 years of Reform Jewish membership and turns its back on an entire movement,” Jacobs wrote.

The following Sunday, on October 21, 515 people — 85% of the voters — voted to fire Rabbi Steven Fink, who was accused of behaving inappropriately multiple times, including with a minor. Now he’s gone, but the synagogue is still struggling with the emotional and financial fallout. A chunk of the membership has quit since the beginning of the rabbinical association’s nearly three-month long investigation into Fink, some citing Fink’s dismissal as their reason for going. The investigation — and the threat that Fink will sue the synagogue — may also have derailed a planned merger with a nearby congregation.

Fink says he was framed. The Reform movement and Oheb Shalom say their ethical integrity — and the safety of congregants — was at stake. All involved have been caught up in yet another radioactive investigation of a long-serving Jewish spiritual leader.

Oheb Shalom occupies a large campus in the tony, and heavily Jewish, Pikesville section of Baltimore. Its iconic midcentury building was meant to appear like a cross between the stone tablets bearing the Ten Commandments and a jet turbine, according to a book about Baltimore architecture, and its multiple sanctuaries can house more than 1,500 worshippers at a time. There is an organ in the chapel.

The congregation was a bellwether of the Reform movement’s stability during its first century and a half: Fink himself was only the fifth senior rabbi to serve there. Fink, 67, retains the trappings of an upright Reform rabbi, wearing purple robes to services and a buttoned suit to the Hanukkah carnival. He is known among coworkers and congregants for his crisp, honest sermons, his slightly off-color jokes and what several women described in a report on the allegations against him as a wandering, staring eye.

“I achieved my life’s goal when I was elected senior rabbi of Temple Oheb Shalom in 1999,” Fink wrote in a speech to the synagogue’s board of trustees in September.

In mid-April, five months before Fink made that speech, the synagogue received an allegation from a congregant that Fink had placed his hand on her thigh in the course of her asking him for a college recommendation when she was 17, in 2007, according to documents shared with the Forward. The synagogue’s board had already received multiple allegations of inappropriate behavior by Fink from congregants, according to Amy Rotenberg, a spokesperson for the synagogue, and had started investigating them. Fink had asked the board not to report those accounts to the Central Conference of American Rabbis, the Reform movement’s rabbinical association, Rotenberg said. (Fink denies this.) But the seriousness of the allegation involving touching a minor spurred the board to report it both to Baltimore police and the CCAR.

“People recognized a possible pattern, and the pattern was concerning,” Rotenberg said.

The board described the allegations in a document to the CCAR that was shared with the Forward. Besides the allegation of touching the teenager’s leg, they ranged from Fink commenting inappropriately on the appearance of teenage girls, to Fink saying, in reference to a conversation about male converts, that he “always carries a pen-knife” for such an occasion.

At the beginning of May, Fink was informed about the investigation and placed on paid leave, on the advice of the synagogue’s lawyer, Rotenberg said.

The CCAR’s Ethics Committee voted to suspend Fink from the rabbinate on August 17. Suspensions generate a t’shuvah, or repentance, plan that comes with the possibility of reinstatement to the CCAR and, possibly, a return to pastoral work. On August 22, Oheb Shalom’s board voted unanimously to begin termination proceedings against Fink.

But the synagogue’s bylaws stipulate that its membership ratify the board’s decision to fire a senior rabbi with a two-thirds majority vote.

Emails flew back and forth among the membership, including a lengthy email from Fink on October 6 urging members to vote against his termination and a rebuttal a week later from five past presidents imploring the congregation to vote for it.

On social media, several congregants noted their support of Fink, and some called the accusations against him a “downside” to the #MeToo movement.

“There is a ‘hive’ mentality now,” wrote one congregant. “We so want the pendulum swung the other way that many are getting hurt.”

Then came Jacobs’ email about possible expulsion from the movement, which was co-signed by the board chairman of Reform Judaism’s umbrella organization. Jacobs knew it would be shared with the congregation, according to Rotenberg.

Rotenberg said that Jacobs’ email was “probably a factor” in the synagogue’s decision to fire Fink.

“This is one of the oldest Reform synagogues in America,” she said. “I don’t think… that people wanted to leave the Reform movement over this.”

Fink says that Oheb Shalom’s executive committee used the CCAR’s unusual investigative process — which required Fink to not speak publicly about the investigation, or risk expulsion from the CCAR — as a political tool to oust him from his job. In the CCAR’s report, which was shared with the Forward, investigators noted that the anti-Fink faction within the synagogue feels as it does primarily because of their support for the assistant rabbi, Sarah Marion. In the spring, Fink called for Marion’s contract not to be renewed, according to the report.

“It appears to us that [the leadership of] Oheb Shalom used the CCAR for its own purposes,” said Andy Graham, Fink’s lawyer. “The termination process was about as far from due process as anything I’ve seen.”

Fink’s firing has also affected his wife, Sally Fink, who has worked at Oheb Shalom since he was hired as senior rabbi in 1999. In early September, she says, the synagogue placed her on paid leave from her position as director of adult education without saying why.

The investigation has disrupted the synagogue’s financial planning. Oheb Shalom realized last year that it was “drawing with another nearby historic Reform temple. In July, the second temple ended the merger plan after announcing a 30 day pause to merger negotiations after Fink’s investigation began in May, and declined to specify why in comments to local media.

Membership has also dropped. In 2017, the synagogue saw a net increase in membership, according to what Oheb Shalom president Mina Wender told CCAR investigators. But Fink says that his supporters have told him that about 200 households have left the synagogue because of his ouster. Rotenberg declined to specify exactly how many families have left the synagogue since May, saying only that 22 that left said explicitly it was because of Fink’s suspension, and that another 31 left without specifying why. Others have left for different stated reasons, she said.

The number of attendees at High Holiday services dropped by nearly half over last year, with “family” services attendance dropping to under 100 from 300, according to a synagogue member who compiled attendance numbers this year and both his and Fink’s estimates of last year’s services.

“This was a reaction to the scandal, for sure,” the member, who says he has attended the synagogue for over 50 years, said.

Rotenberg said the drop in High Holiday attendance was no more than a 10% dip year-over-year.

In an email announcing the results of the vote, Wender said that the synagogue will keep the interim rabbi hired after Fink was suspended (not Marion, the assistant rabbi whose contract Fink didn’t want to renew) on staff for at least another year.

“The vote today is the first step toward the healing that our congregation needs and deserves, and we can now begin to put this painful matter behind us,” Wender wrote.

Graham, Fink’s lawyer, said if they don’t reach a “reasonable” resolution, including pay for the remainder of Fink’s last contract, they will file a civil action against the synagogue for breach of contract, fraud, negligence, invasion of privacy and defamation. Graham declined to say whether the CCAR would be named in any legal filings.

“His reputation has been torn to shreds as a result of the way this has been handled,” Graham said.

Update, 10/25, 11:00 a.m. — The article has been updated to note that Fink disputes that he knew about any allegations against him before being contacted by the CCAR.