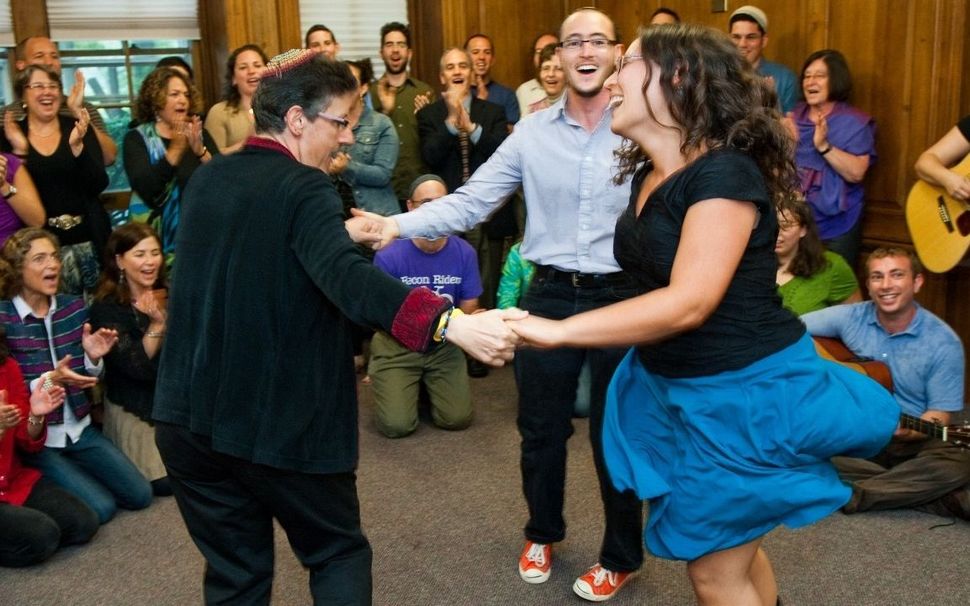 When the Reconstructionist movement voted two years ago to admit rabbinical students with non-Jewish partners or spouses to their seminary, the move triggered a wave of intense reaction, but little surprise at its provenance.

After all, Reconstructionism — American Judaism’s smallest and youngest movement — has been over the course of its history the source of several seeming innovations in practice that are now mainstream.

Now, the movement has rebranded, restructured and is about to hold its first conference in eight years. Amid those changes, though, the conference will show that the movement is staying the same: quirky and tiny despite the fact that those qualities sometimes mean tradeoffs.

“One of the reasons that we sometimes don’t get recognition, or that we remain small, is that the larger movements often adopt our ideas after we pioneered them,” said Rabbi Elyse Wechterman, head of the Reconstructionist Rabbinical Association, the movement’s membership body for rabbis.

Indeed, the purpose of the convention isn’t necessarily to make decisions about Reconstructionism’s future. But that’s okay, because the movement is all about process, not product.

This year’s convention, to be held at a hotel in downtown Philadelphia on November 15-18, will bring together more than 600 participants from over 80 Reconstructionist communities, a spokesperson for the movement said. The event, which has a budget of $225,000, is sold out, according to the spokesperson.

The weekend’s workshops run from “Crocheting Kippot” to “Embodied Storytelling: Mixed Race Identities, Activism, Diaspora.” The majority of the workshops will focus on social issues, especially on questions of diversity within Judaism.

The Reconstructionist movement was founded by Rabbi Mordecai Kaplan in the early 1920s, fueled by his idea that Judaism is a civilization, and that as such Jews do not need to follow halakha (Jewish law) or believe anything specific theologically. It also differed from Reform Judaism in that it did not adopt the trappings of church services — rabbis in robes, organ music — to better integrate into Western society. The movement now has just under 100 congregations. The movement doesn’t estimate its numbers, and it was too small to be given its own category in the Pew Research Center’s seminal 2013 study on American Jews.

The movement hosted the first American bat mitzvah in 1922; the ceremony didn’t become widespread in American synagogues until the 1960s. The movement’s main seminary was the first to admit openly gay and lesbian rabbinic candidates. And its current prayer books, first published in 2000, were the first denominational liturgy collections to include readings from outside Judaism.

In some cases, the movement’s progressivism has led to splintered factions of its own rabbis. In 2016, after the decision to ordain rabbis in interfaith partnerships was announced, a group of 20 rabbis broke off from the movement.

Sometimes, Reconstructionist rabbis’ positions can come off as “marginal” to the broader Jewish community, said Noam Pianko, a professor of Jewish studies at the University of Washington.

In January of this year, its umbrella organization and seminary renamed itself “Reconstructing Judaism.” Waxman wrote in JTA that the change represents a shift “from a focus on ‘being’ Jewish… to a focus on ‘doing’ Jewish.” In other words, the movement recommitted to its founding principles: coaxing the evolution of the Jewish people, and not just preserving the Jewish religion.

Wechterman says the movement realizes that, within liberal Judaism, there are fewer and fewer differences between the “products” the movements offer: alternative liturgy, musicality, spiritual practices and an emphasis on social justice can be found in many different kinds of synagogues in 2018.

In the Trump era, Reconstructionist leaders, along with their Conservative and Reform counterparts, have leaned hard into stances on social justice. Major figures from all three groups boycotted a phone call with Trump ahead of the High Holidays in 2017, and all three movements condemned the administration’s family separation policy in June.

Reconstructing Judaism, however, does social justice with a slightly sharper edge.

They more readily grapple with divisive issues — like interfaith rabbis, and Israel — that other Jewish denominations draw strict red lines around, Pianko said.

“They’re not just giving lip service to the language of social justice, but they are willing to look at the conflicts between contemporary American politics and Jewish tradition,” Pianko said.

Mordecai Kaplan, for instance, openly questioned whether Israel should be a Jewish state over 50 years ago, he added.

Of course, Reconstructing Judaism’s disregard for hard and fast lines, especially on Israel, has in some ways isolated the movement. For instance, the movement condemned Israel’s release of a “blacklist” of people involved in the Boycotts, Divestment and Sanctions movement who were not allowed to enter Israel. Neither the Reform or Conservative movements made such a statement.

Reconstructing Judaism values the conversations about these issues more than where it comes down vis-à-vis other Jewish groups, Waxman said, adding, “Sometimes we pay a price for that.”

“Other times, we get ignored or castigated, and when other movements follow, they get the recognition and we get forgotten, and that’s frustrating.”