After Synagogue Carnage, Pittsburgh Jews Wait To Hear Who Lived — And Who Died 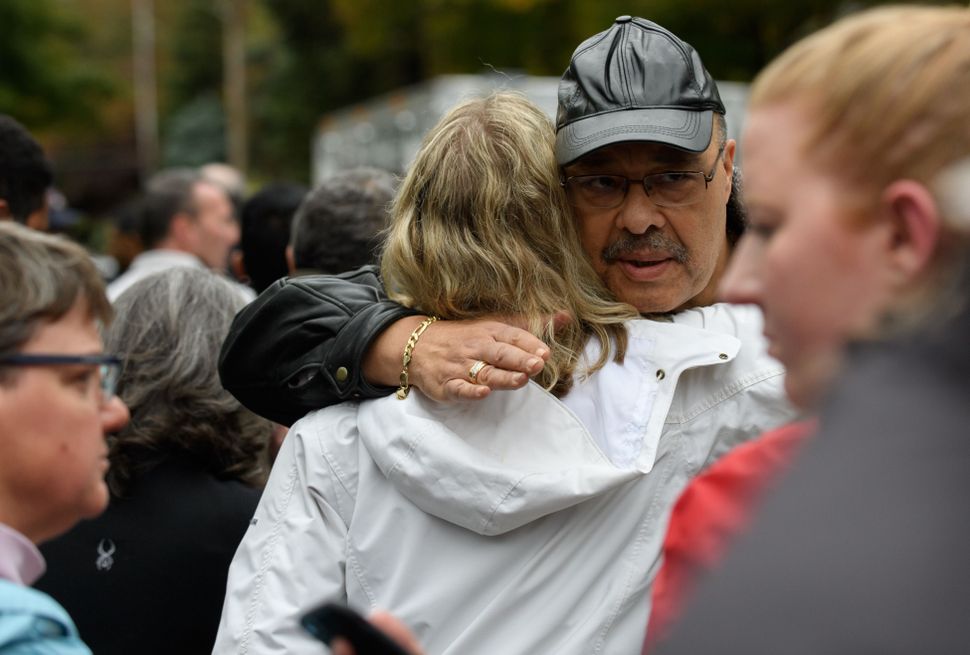 All over Pittsburgh on Saturday afternoon, Jews are waiting to hear which of their friends were murdered this morning at a synagogue in the leafy neighborhood of Squirrel Hill, and which survived.

“My friends have been killed and I don’t who they are,” said Harold Caplan, the treasurer of one of the three Jewish congregations with sanctuaries in the building that was attacked on Saturday. Caplan was home watching the news on television, waiting to hear the names of the eight people said to have been killed.

A gunman, identified in press reports as Robert Bowers, entered the synagogue building around 10 A.M., as services were underway in at least two of the building’s three sanctuaries.

“I know people from all three congregations,” Caplan said. “I’m sort of in shock.”

Josh Sales got the call on Saturday morning. By early afternoon, he was on the scene.

“It’s roped off,” said Sales, director of the Community Relations Council of Greater Pittsburgh, standing a block away from the building. “The FBI says it’s a terrible scene.”

Jewish community leaders, including the leaders of the three Jewish congregations, headed to the local Jewish Community Center for a meeting in the middle of the afternoon. Throughout the city, others waited for news.

“It’s a very tight-knit community,” said Saul Markowitz, a Pittsburgh resident and president of Markowitz Communications. “We all have a feeling that we’re all, all of us are going to know someone that was touched by this situation. We’re all feeling like its all happening to all of us here.”

The synagogue building is shared by the Tree of Life synagogue and New Light Congregation, both conservative, and Congregation Dor Hadash, which is Reconstructionist. It is located in Squirrel Hill, a Jewish neighborhood on the east side of Pittsburgh.

On Shabbat, Squirrel Hill slows down. Hasidic Jews walk to synagogue with their families; many stores are closed. “It’s one of those communities,” Markowitz said.

The shooting at the Squirrel Hill synagogues is only the second shooting at a synagogue in U.S. history, and the first that appears to have been motivated by anti-Semitic animus. The only other shooting 1966, when a young congregant shot the rabbi and then himself at a synagogue outside of Detroit, according to Lila Corwin Berman, a professor at Temple University.

Sales, the Jewish communal official, said that the Pittsburgh Jewish community had been diligent in recent years about providing active shooter trainings. “Even when you’re doing the training, you never think its going to happen in your community,” he said. “This is the type of thing that really shakes the Jewish community to its core.”

After Synagogue Carnage, Pittsburgh Jews Wait To Hear Who Lived — And Who Died