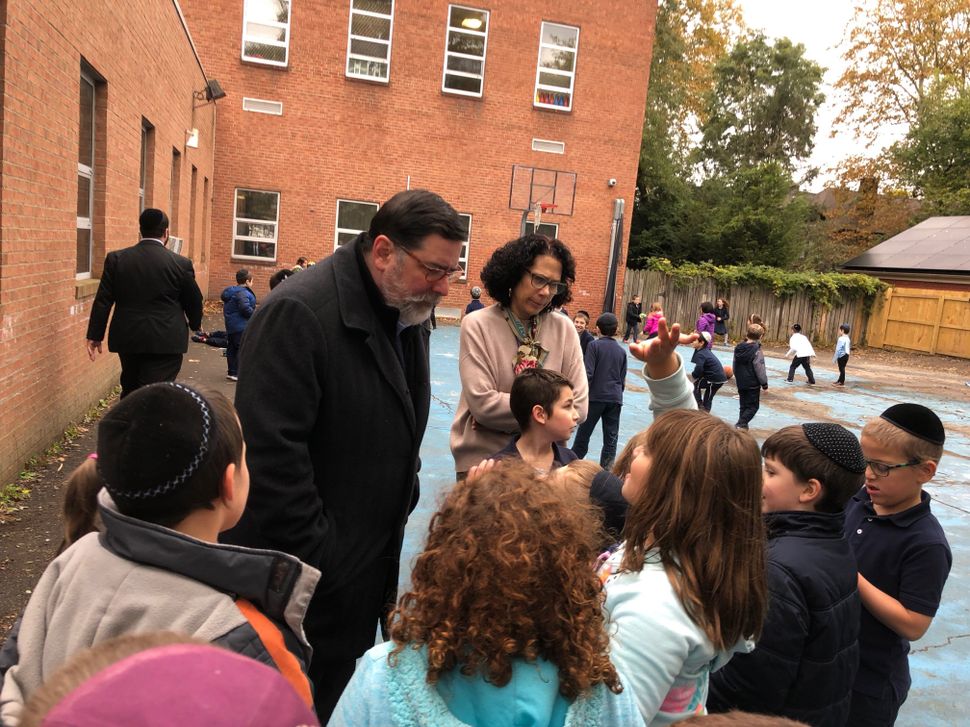 “I wanted to introduce you to two of my friends,” Peduto told the children in the play area on Monday afternoon. “They’re Pittsburgh police officers. They’re going to be around for the next week or so. And I just want you to know that you’re safe, and that if you have any questions, you can always walk up to a policeman and ask them.”

Most of the students crowded around to listen, though one boy wearing a kippah and tzitzit continued to throw a dodgeball at a girl wearing a sweater and a long skirt.

“They’re here to make sure your safety comes first,” Peduto said. “The most important thing we do in Pittsburgh is take care of our little Burghers.”

The school is about a 15-minute walk from Tree of Life Congregation, where 11 people were killed during Shabbat services Saturday by an anti-Semitic gunman. The school principal, Rabbi Sam Weinberg, said that 95% of students live within a mile of the building. Many of them were attending services at a nearby synagogue on Saturday that went on lockdown as reports of the shooting at Tree of Life emerged.

Like Peduto, Weinberg also stressed to students that they were safe when he met with them in separate small age groups earlier in the day.

“The main talking points were, we’re safe. [We] stress[ed], especially to little kids, that just because this happened doesn’t mean it’s going to happen again,” he told the Forward.

“I talked about the importance of us living our lives, not being afraid to keeping learning and praying and thinking about how we can help, but at the same time, continuing to be strong,” he continued. “We told them that every emotion that they’re feeling, whether it’s sad or confused or nothing, are healthy valid emotions. The last thing we wanted to do is create trauma.”

There are 378 students from early childhood to 12th grade at this Orthodox day school in the heavily Jewish neighborhood of Squirrel Hill, and unlike many other Jewish schools around the country, enrollment is growing. Hillel Academy just opened a new building for the boy’s high school at the beginning of the school year, and already it’s at full capacity. Elsewhere on campus, full bookshelves are stuffed into stairwells to maximize space.

School appeared to be operating mostly as normal: In the early childhood wing, which has that antiseptic preschool smell, parents picking up their children were talking about pre-Thanksgiving clothing sales.

But some things were different today: Students were saying extra psalms during the morning and afternoon prayers. (A sign outside one of the prayer rooms says, “Stop the talking in Shul!”) The mayor came to recess, where one student tagged him as “it” while he was talking to a visiting reporter. And Weinberg delivered special remarks to the students, though he said he was intentional about not being too emotional.

Weinberg said that the students were resilient: “A second grader, they’re going to hear about it, they’re going to be sad about it for five minutes or two minutes, and then they’re going to go outside and play recess.” But some kids were having a tougher time: One teacher told another that one of his students had said that he didn’t want to go to shul anymore.

Peduto, who said he was also visiting other local Jewish schools, told the Forward he thought it was important to talk to the children directly when he introduced the new officers, who are expected to be stationed there at least through the end of the week. “I just want to make sure their life continues exactly as it had on Friday, that they don’t have any fear,” he said.

To that end, he took the time after his speech to speak to some of the students.

“Something bad happened,” one boy said.

“And that’s why we’re making sure everyone is safe,” Peduto replied, pointing to the police officers. “They’re going to be here, you’re going to see them, and I want you to know why.”

He stressed to another student that the “bad man” was locked up in jail.

“I want to teach him a lesson,” one girl said.

“We will,” Peduto responded.

Peduto, who represented Squirrel Hill on the city council for 12 years before becoming mayor, said he had been “adopted by the Jewish community.”

News had emerged just before his visit that President Trump will be traveling to Pittsburgh on Tuesday, the first day that the victims’ funerals will be held. Peduto, who said he will attend the funerals, said Trump should reconsider.

“I think the president should first ask the families of the victims,” he said. “Our focus is on them and their needs for the funerals. We will have our officers at each of the funerals. We will have our officers at Jewish institutions in a greater presence throughout the community. I don’t know if we’ll have enough officers to properly give adequate protection to demonstrations and protests that may occur. My request to the White House is, call the families first. If they’re okay with it, then work with our local public safety to allow the families the adequate public safety they need between now and Friday.”

“We have guards, we have brand-new security doors we installed this year, we have fobs, we have cameras,” he said. “I don’t want to go into specifics, but we’re always evaluating. But thank God, we’re very happy with what he have.”