60 Years Ago It Was A Bomb In An Atlanta Synagogue 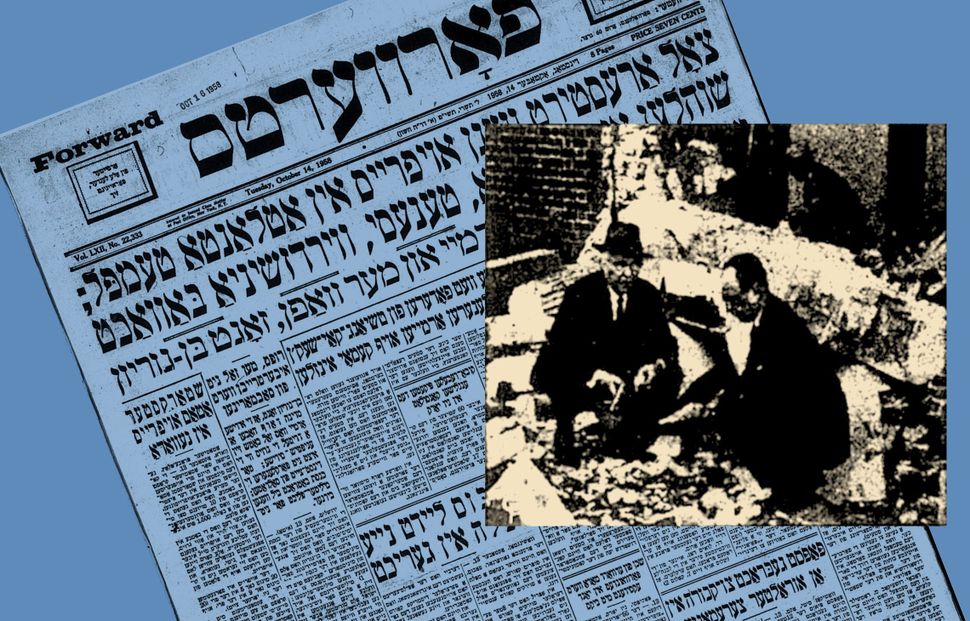 This was originally in the print edition of October 24, 1958, and was posted online in October 2018.

October, close to the Jewish New Year, seems to be peak season for American anti-Semitic violence. Sixty years ago, in October 1958, America’s first successful satellite launch was followed swiftly on the front page of the Yiddish Forward by the premeditated bombing of the Atlanta Jewish Temple. The bombing blew a hole 18 feet wide and destroyed the temple’s wall, sending glass flying from all the windows.

The Forverts posted weeks of headlines about the story, watching the spread of a particular American brand of Anti-Semitism, led by ignorant men influenced by local Klan officials and newly hatched local Nazis. It began in the south, where integration was receiving Jewish support and it began to spread, as did the Forverts coverage, to a synagogue in Peoria, Illinois — and all the way east to Brooklyn where a gang of kids, yingelekh in the Forverts description, decided to join the party and bust the windows of a local synagogue.

The Feds were called and the FBI organized a conference on American anti-Semitism. Suspects were arrested and the judge refused them bail. Leaders (or a leader) stepped up and condemned the local Klu-Klux-Klan, even as a church hosting a rabbi as speaker received bomb threats. A synagogue in New Jersey was threatened. Forverts writer Boris Smolar, one of the pioneers of Jewish journalism who founded the Jewish Telegraphic Agency and feared no one, wrote this op-ed demanding Jewish leaders coordinate responses, and rein in their desire for publicity.

With eerie prescience, Smolar demands that media reconsider the power given to those who encourage and commit violent murder, when they devote their front pages to their mad hysterical acts. 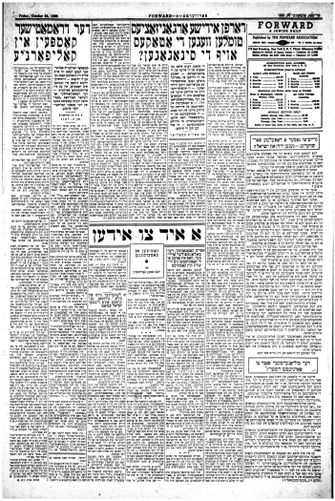 Must Jewish Organizations Create An Outcry Over The Synagogue Bombings?

Must Jewish organizations in American create an uproar about the terrorist acts against synagogues, or is it preferable for leaders to enact their struggle against anti-Semitic terrorists quietly, avoiding additional publicity?

That is the question posed to American Jewish leaders now, following events in Atlanta and other cities.

Several large Jewish organizations, during these “Atlanta-days,” have done their most important work quietly using Washington, D.C., channels. They are still there, on guard and performing effectively, yet muted.

But other Jewish groups disavow the “quiet methods” and have released statements to the press and other public venues. They are still creating an outcry.

It’s hard to say which side is right here. The fact remains that not every organization that believes in creating an outcry caused President Eisenhower to come out with his sharp condemnation of those who threw the bomb at the synagogue in Atlanta. Those organizations also didn’t cause the FBI to come to Atlanta and apprehend the terrorists.

Among those Jewish organizations that didn’t make any statements and did their work quietly are the American Jewish Committee and the central organization of the local groups and Jewish groups who remain on guard against anti-Semitism — the body of which is known as the National Community Religious Advisory Council. Among those moved to make statements in the general press were the Anti-Defamation League of B’nai B’rith, the American Jewish Congress and some smaller groups. The Jewish community in Atlanta was angry with the Anti Defamation League. Leaders of the Jewish community in Atlanta say that if anyone was justified in coming out with a statement publicly it was the suffering community that was on site, rather than a Jewish organization on the sidelines of local lives.

The truth is that the Jewish community in Atlanta was ready to give a public statement, but what should that be? Something that expresses gratitude of the local Jewish community to all parts of the non-Jewish population that earnestly condemned the terrorists. And thereby also expressing the intention that terrorist acts caused damage to the good reputation of the entire state no less than to the synagogue building itself.

The Jewish community leaders in Atlanta weighed and measured words in their statement and in the meantime, ADL came out with its own statement in the local press, without their agreement and against the will of the local Jewish community. Can one resent Jewish leaders in Atlanta for being upset with ADL? Can one accuse them of being wrong when they claim the public declaration of ADL did more damage than good on behalf of Atlanta’s Jews?

The Jews of Atlanta are right and also wrong in accusing ADL of “running” to the press for their own publicity. They are right in believing that leaders of ADL should have conferred with them prior to “running” to local press with statements. They are correct when they demand coordination on such a critical issue as the expression of the Jewish response to anti-Semitic terrorist acts. They are right in their charges and in saying they are supported in them also by other Jewish communities where of late terror acts have occurred.

One doesn’t need to consider these charges against ADL as a way of saying that the league is not consequential in its work. The opposite is true; in their fight against anti-Semitism in America, ADL has a very impressive record. Its weakness stems from its love of publicity. Meaning that by their love of publicity they strike fear in Jews that they’ll pay dearly for those aims of ADL sets for themselves. Interestingly, the American Jewish Committee is aligned with ADL in tasteless fundraising. But the American Jewish Committee is also not entirely thrilled that ADL believes in raising such a ruckus, rather than working quietly and in depth. AJC is also not terribly happy about the publicity released in the English-language press by ADL immediately following the explosion of the synagogue in Atlanta.

In as much as quiet actions can lead to results, nobody can say. But this week in Washington a quiet conference of Jewish communal leaders from various states where anti-Semitic terror acts took place, or where they fear such terror can take place, and all 18 Jewish leaders present were in favor of “quiet” work and struggle against anti-Semitic terrorists. They were in agreement that as long as local police and FBI were working actively to uncover the terrorists, they must support the general public and not the Jewish organizations. Especially after Eisenhower’s statement characterizing the terrorists as underworld criminals that must be dealt with severely.

Atlanta’s Jews — who for the first time were involved in FBI investigations into anti-Jewish terrorist acts in order to help uncover the guilty parties — are very happy with FBI methods in their state. Jewish leaders in other Southern states express similar expressions of satisfaction. Southern Jews are currently very comfortable and have resumed living daily life as previously. They are leaving it up to the FBI and are grateful to Eisenhower for once and for all ordering the FBI to get involved in the situation whether Congress could legally order it or not.

It remains unclear whether the terror against Jewish institutions in the South is a revenge act for Jews siding with the black population on the “integration” issue or whether it’s terror simply against Jews due to anti-Semitism. The general sense of it is that it’s a mixture of both. But the truth is, there is within the South a large part of the Christian population that while distanced from anti-Semitism are strongly against equal rights for blacks.

The accepted explanation is also that the more publicity given to details of anti-Semitic incidents, the more stimulated the publicity-seeking “crackpots” are to send threatening letters to Jewish institutions and to spread unwarranted fear through threats and telephone warnings. That’s also one of the reasons that the more responsible Jewish organizations want to seek less publicity about incidents being splashed throughout the press more than is necessary. The FBI surely doesn’t want additional publicity then as it makes it even harder to work at finding the guilty.

Therefore, it’s hard to deny that the goals of ADL arise from a desire for publicity, in opposition to those of other Jewish organizations. The trouble with ADL is just that it doesn’t coordinate its plans and carve out its own path, believing that garnering publicity is better than leading the fight against anti-Semitism quietly.

Events in the South have shown that coordinating efforts in the fight against anti-Semitism is important for Jewish organizations. Only when such coordination is achieved, only then, nobody will ask if it’s best to create an uproar or better if the fight is lead through quieter but productive means. Such coordination will also help avert thinking that Jews are in danger in America. American Jews don’t think they are in danger. Even those in the South. But the foreign press — and even in Israel — think that Jews in America are currently living in fear of anti-Semitic terrorists. And responsibility for that lies solely on the publicity surrounding the terrorist acts in Atlanta and in other cities that are sad news indeed, but not something intimidating the American Jewish community.

60 Years Ago It Was A Bomb In An Atlanta Synagogue