Pittsburgh Brothers Buried As They Lived, Together, And Sheltered By Their Faith 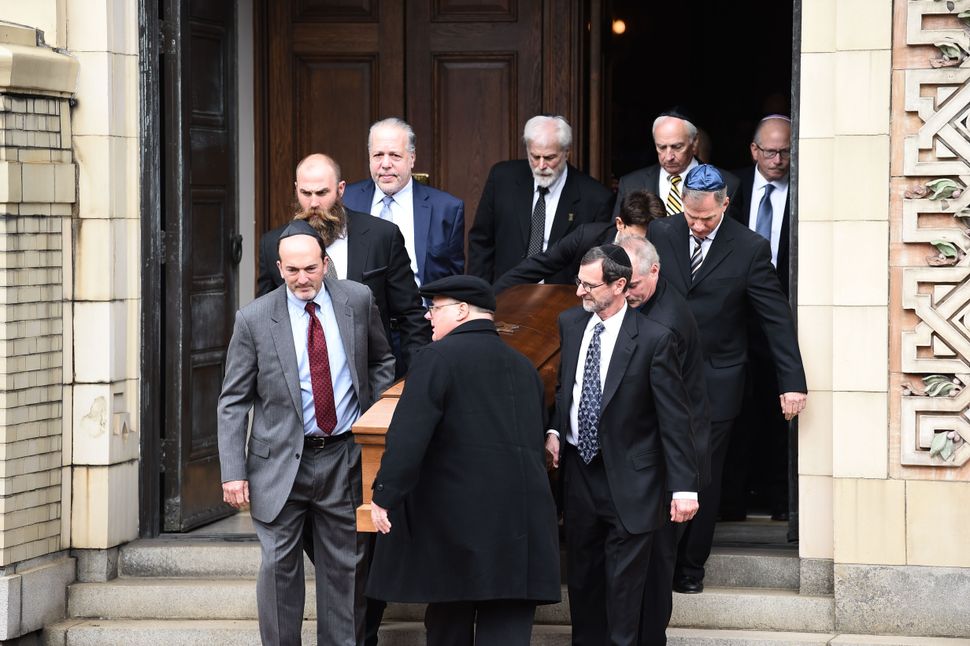 Rodef Shalom Congregation in Pittsburgh is the oldest synagogue in Western Pennsylvania — but nothing in its long history was quite like what happened there Tuesday, when it hosted the funerals of brothers Cecil and David Rosenthal, who were two of 11 people killed while praying at the nearby Tree of Life Congregation on Saturday.

Cecil, 59 and David, 54, were beloved figures in the Pittsburgh Jewish community. And the attendance numbers at the funeral, one of the first to be held for the victims, reflected that: Rodef, which hosted the funeral since Tree of Life is still an active crime scene, was packed to the balcony, with people sitting on steps and standing in the aisles. Reuters put the crowd, which included residents of the home for people with disabilities where the brothers lived, at about 1,800.

The crowd was diverse: Religious and secular Jews and people who weren’t Jewish at all; people of all races, including many African-Americans and a woman in a hijab; student delegations from the University of Pittsburgh and Carnegie Mellon University; someone wearing an Israeli flag as a cape; friends and their aides from ACHIEVA, the program for people with developmental disabilities that the Rosenthals were in; and more than 100 players, coaches and front office staffers of the Pittsburgh Steelers, where Cecil and David’s sister Michelle used to work.

Tree of Life’s rabbi, Jeffrey Myers, who was in the building during the shooting, told the Rosenthals’ parents that God “broke the mold” with the brothers. He told them to take comfort in the knowledge that “the entire world is sharing that weight with you.”

Avowed anti-Semite Robert Bowers, 46, was charged with 29 federal felony counts and was ordered held without bail on Monday. If convicted, he could face the death penalty.

The cantor sang Psalm 23 in Hebrew in a high, thin, quavering voice. A letter of condolence was read from the Bishop of Pittsburgh. Tree of Life’s emeritus rabbi said: “If you were to ask David and Cecil where they would want their last moments to be, they would have said Tree of Life.”

Their sister Diane Rosenthal Hirt said that Cecil and David were always referred to as “the boys,” even into their middle age. “Maybe because they weren’t hardened like men… [we] thought of them as two gentle giants,” she said.

Her husband Michael Hirt took on the task of sharing most of the family memories.

Hirt said that when he spoke on the phone with David Rosenthal, David would always begin with the joke: “Hey Michael, the police are looking for you.”

David “loved everything related to the police and fire departments,” Hirt said. “He carried a police scanner everywhere he went.”

A murmur went through the assembly. Four police officers were injured during the shooting.

While David was much more shy, Hirt said, Cecil was “the mayor of Squirrel Hill,” the heavily Jewish neighborhood where they lived and where Tree of Life is located. “He knew everyone in town. He knew everyone’s business.”

The brothers were a familiar sight on the corner of Forbes and Murray avenues in Squirrel Hill, where the synagogue was located, and not far from where they grew up.

“Cecil was very friendly and would greet passersby, whether or not he knew them, saying ‘Hello’ to all the men and letting the women know how beautiful they looked,” Rosenthal cousin Pam Cohen, 68, told Reuters.

Cecil was constitutionally unable to keep secrets, Hirt said. Once, his family tried to keep a funeral secret from him. Cecil somehow found out, and hitchhiked and took the bus to the funeral to make sure he could pay his respects.

Cecil couldn’t read or write, Hirt said. But one day, during the family’s annual flea market shopping trip, Cecil bought greeting cards. “One day, we got one in the mail,” Hirt said. “It contained a jumble of random letters, but in the middle was his name.”

“We were much more enriched by them than they were by us,” Hirt concluded. “They were kind, thoughtful and innocent…pure souls who carried no ill will toward anyone.”

Rabbi Myers, in his brief concluding remarks, noted that the brothers were devoted members of Tree of Life. Cecil was given the task every week of carrying the Torah after it was taken from the ark, a responsibility that he took very seriously. Cecil always arrived to Shabbat services early to make sure everything was set up properly. “No matter how early I got there, Cecil was already there,” Myers said.

Speaking again to the brothers’ elderly parents, Myers said: “You gave us this beautiful gift of Cecil and David. We thank you for sharing that gift with us….Every time we walk into services, it won’t be the same, but they will be there in spirit.”

The cantor sang the El Malei Rachamim prayer, the caskets were removed from the sanctuary, and the mourners exited the building to a sea of photographers.

Reuters also contributed to this report.

Pittsburgh Brothers Buried As They Lived, Together, And Sheltered By Their Faith