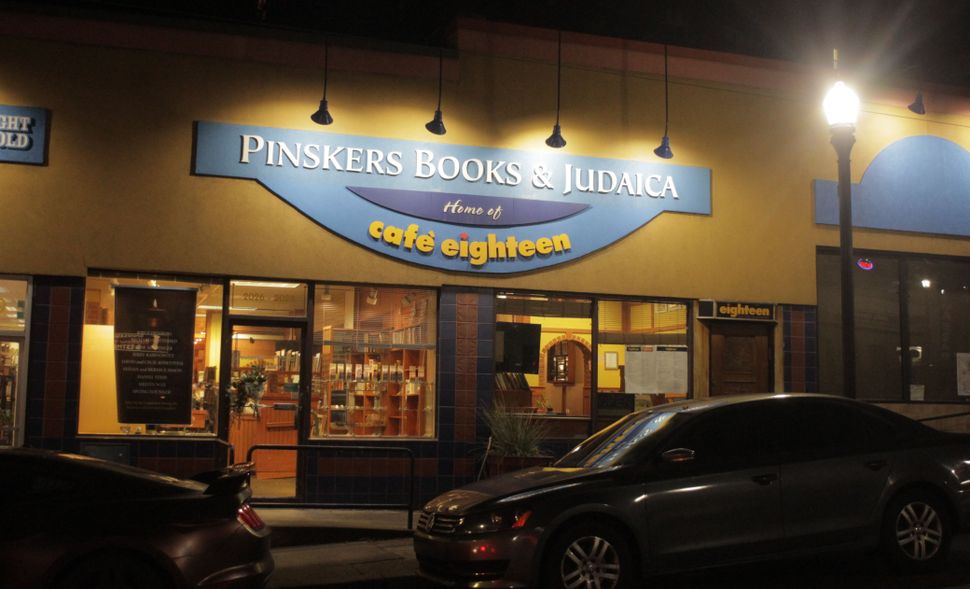 PITTSBURGH — Signs of life began to appear on the fifth day of mourning in Pittsburgh, even amid the onslaught of funerals, shiva calls and community gatherings. Parent-teacher conferences were held at the Yeshiva Schools of Pittsburgh girls’ building. The Community Day School celebrated a bar mitzvah at its morning prayers.

And Pinsker’s Judaica Center changed ownership for the first time in 35 years.

The Judaica shop and restaurant, a Squirrel Hill institution, is now in a period of renewal even as the community that loves it is mourning the worst attack on American Jews in decades. The shop’s long-time owner, Shlomo Perelman, has tried to take the challenges of the week in stride. Despite his anger and sadness, and the stress of feeding hundreds of people, he says he has been able to find a measure of meaning in his last, tragic week as the face of Pinsker’s.

“It’s very gratifying to be able to provide this kind of presence for the community,” Perelman, 68, said. “Especially one last time.”

Pinsker’s was opened in 1953, and has outlasted every other Judaica store in the city. It’s one of the last few Jewish stores in the neighborhood, located between the Murray Avenue Kosher grocery store and Milky Way, a kosher pizza shop.

The space is split in half: part wine and Judaica shop, part cafe. At Thursday lunch, the dining room was filled with locals and visiting mourners from across the country ordering from a classic kosher bistro menu of burgers, sushi and Israeli dishes.

Next door, the shop looked like there had been a small run on its inventory. Yarmulkes have been flying out the door. The wine stocks have been thinning. In the shelves under the checkout counter, someone placed a box of yartzeit (memorial) candles next to the Hanukkah candles, for expediency.

Perelman’s exit has also created its own measure of chaos. Boxes of his book collection — coffee table books, out-of-print books, old National Geographic magazines — crowded the entrance, waiting to be transferred to his home a few blocks away. Papers relating to the contract of the sale lay on the table in the back.

The shop is getting new ownership in perhaps its most hectic week ever. Perelman had planned an orderly transfer of power from him to the buyer, Daniel Cohen, 52, a local real estate agent who has helped out at Pinsker’s sporadically over the years.

The two set the final terms last Friday, and had planned to have an all-staff meeting Sunday morning to go over Cohen’s vision for Pinsker’s going forward. But when the Sabbath ended Saturday night, Perelman called Cohen to say the meeting was off: They would have to do the transition while responding to Jewish Pittsburgh’s unfolding catastrophe.

They’ve fielded delivery requests and guests from across the country and world. Former Pittsburgh residents who have come to show support and mourn with their former community have stopped at the cafe for a meal before catching a flight home. Visiting members of the Israeli emergency response organization Hatzalah dined at the cafe, as did members of the Anti-Defamation League, Perelman said. He and Cohen managed to ink the last few signatures on their deal just as the lunch rush was ending Thursday. 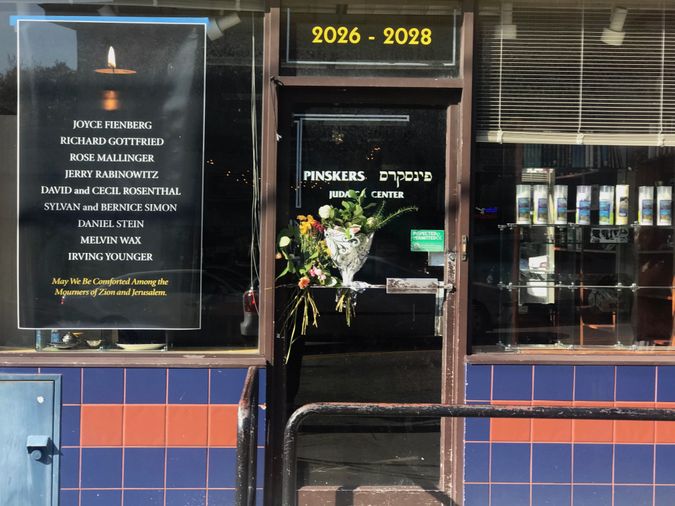 A memorial poster that Pinsker’s is offering on its website and a flower memorial in its front door. Image by Shlomo Perelman

Perelman has been a committed Judaica salesman since he bought Pinsker’s in 1983. He had the forethought to purchase — in 1994 — the domain names judaica.com and judaism.com. (He already owned 1-800-JUDAISM.)

He was born in Pittsburgh, and except for when he went away to school, he’s spent his life in the city. The black Pirates baseball cap on his head looks permanently affixed — though he’s evasive about what the logo “P” stands for.

The week has taken a toll on him, but he hides the visceral feelings behind a gray beard and deadpan delivery. His grief is matter-of-fact.

“Loss of innocence is the most prevailing emotion,” he said.

Cohen, who officially became the proprietor of Pinsker’s at 12 a.m. Thursday morning, has been a bit more frantic: He has the air of a parent of a newborn. He spoke to the Forward in between reminding staff about the day’s special (beef short rib), pushing out food for shiva calls (salmon platters), and taking catering orders over the phone.

One person called asking about knishes.

“We don’t have knishes, but we have sushi,” Cohen said helpfully. “It’s good sushi.”

After some more questions, the person ended the call. “Call us for a happy occasion,” Cohen said as he hung up.

He acknowledged that the week was leaving him frazzled.

“I was thrown into this a little quickly,” he said.

When the chaos dies down, Cohen, Pinsker’s fourth owner, has an idea of how he wants it to look going forward. He plans to expand the wine selection and reinvigorate the Judaica collection — something he says fell by the wayside as Perelman focused his energies on the restaurant.

On Thursday afternoon, a customer walked in and asked to see jewelry. Cohen apologetically told her there was none.

“You used to have such beautiful jewelry,” the woman said.

“It’s coming back,” Cohen said. “Come back in a month, two months, and we’ll have beautiful jewelry.”

He says he decided to buy the store partly because he wanted to get back into the restaurant business and partly to help Perelman keep the store alive. He feels that, though the internet has eroded brick-and-mortar Judaica sales across the country, the community needs a place like Pinsker’s.

“I don’t know that it’ll ever go back to what it was in its heyday, but we can bring back the feeling that people have somewhere to go [to buy Judaica] where they know a friendly face,” he said. 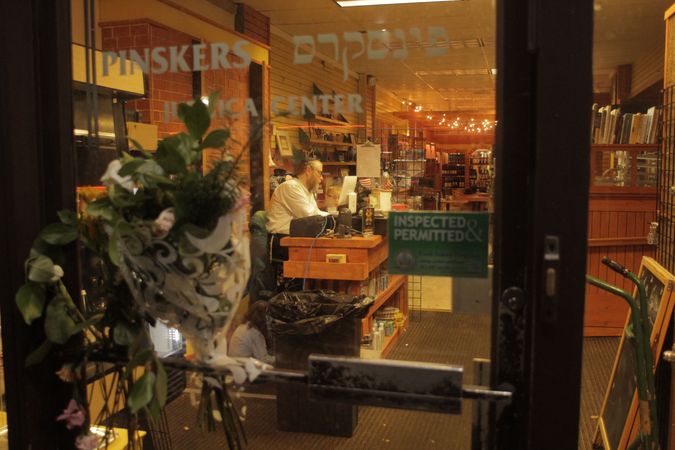 Cohen speaking to his eldest son while his daughter sits behind the front counter at Pinsker’s. Image by Ari Feldman

With retirement on his mind, Perelman says he and his wife plan to travel more, especially to visit their five children, who live in Silver Springs, Maryland; the New York City area and Israel. Still, he says, he’s sad to go.

Does he think Cohen is up to the task? “Absolutely.”

When asked by the Forward if he would pose for a picture, Perelman politely but firmly declined, citing the Jewish custom of not looking at your reflection while sitting shiva.

“This week, we cover our mirrors,” he said.

Click here to link to the Pittsburgh shooting memorial poster that Pinsker’s is offering on its website.