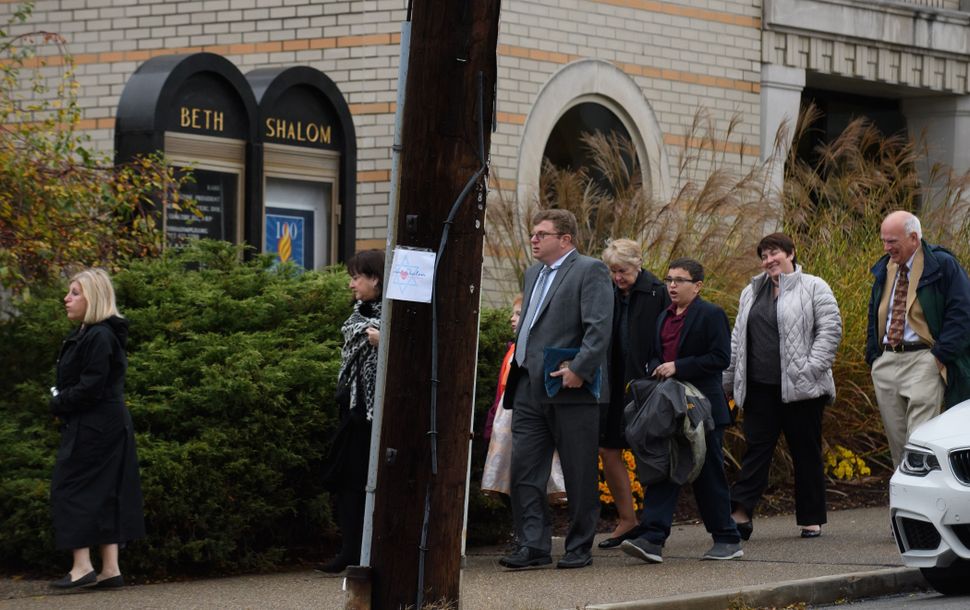 Author’s note: This article is based on reporting from Friday evening and Saturday morning services at synagogues in Pittsburgh. I informed all people quoted in conversation that I am a reporter and have been reporting in Pittsburgh, and honored pre-arranged requests to keep public statements given at the gatherings off the record.

“We mourn for our three [martyrs] tonight, as a congregation,” Rabbi Jonathan Perlman of New Light Congregation told the assembled, his voice wavering. “We are all mourners. Please rise.”

The charge did not go out to an overflow crowd at Rose Mallinger’s funeral, or to thousands at a vigil, but rather to the 80-odd congregants of the New Light. They were gathered in a small, wood-paneled chapel, one that’s part of a much larger synagogue that has welcomed them for the foreseeable future, since theirs is still a crime scene. Three of the eleven killed last Shabbat are theirs. They had come on Friday night to welcome the Sabbath, a mere week after a xenophobic gunman chose their congregation, and two others in the same building, to enact his fantasy of ethnic heroism — killing 11 and wounding six in the conviction that immigrants are hurting “his people.”

Now New Light Congregation stood, turned to the right page, and recited the words on that morning’s Post-Gazette, words whose language is dead, but whose sentiment still lives: the Jewish prayer of mourning, which makes no mention of death.

After a week of grief, the congregants of New Light and its sister congregations — Tree of Life and Dor Hadash — have been embraced by the city and the faith groups around them. Donations pour in from around the world — yet their future is uncertain. They are still in mourning — yet they feel energized to speak out politically.

But on Shabbat, all three congregations sought a measure of privacy from the world that has been watching them.

On Friday night, Tree of Life Congregation held its service in a chapel at Temple Rodef Shalom, the massive Reform synagogue on Fifth Avenue. The temple held its own services in the main sanctuary, a ten-story tall domed room with four piano-sized chandeliers and a stained glass oculus window. The Rodef Shalom crowd, which drew many visitors of all faiths, rivaled that of Yom Kippur, said Peter Rosenfeld, a trustee.

“What we’re seeing is that the hatred of humanity cannot go toe to toe with the love of God,” said Imam Hamza Perez, the youth director at the Islamic Center of Pittsburgh.

Beth Shalom, the largest Conservative congregation in the city, was hosting New Light and Dor Hadash, the third congregation whose home was in the Tree of Life building, in its chapels. Dor Hadash held closed-door services on the second-floor, according to one member, to block out the world for a bit.

“We always have an open door policy, even on Rosh Hashanah and Yom Kippur,” the member on her way in. “But not tonight.”

Downstairs, New Light kept the door to their temporary home open, but the mood was focused inward. Before evening services started, the congregants milled about on the margins of the room, greeting one another, asking, “How are you?” and then apologizing for posing such a strange question.

In the middle of their service, Perlman, the rabbi, offered the congregants a chance to speak a few words about the members killed last Saturday: Melvin Wax, Rich Gottfried, Daniel Stein, described many times over as pillars of the community.

For the second, and last, mourner’s kaddish of the service, Perlman exhorted his congregation to look forward.

“They lived despite the forces of hatred in this world,” he said of the martyrs. “And we all live despite some of the rottenness that occurs. We will not be beaten by this, and we will continue on as New Light Congregation.

“Let’s rise now,” he said, and he gave the page number.

Rabbi Jeffrey Myers of Tree of Life and his wife were among the first to arrive at Beth Shalom. Myers is the rabbi who welcomed President Trump to his congregation, but asked for the words of hate to stop.

Friday night, each of the afflicted congregations held their own services. This morning, the one week anniversary of the tragedy, they would all come together in community with Beth Shalom for one big service.

Myers and his wife were escorted into the synagogue’s main sanctuary, a long, high room flanked with 12 ceiling-height stained glass windows and culminating in a bimah stage with a Torah ark in red marble.

He was right: At 9 a.m. a steady stream of people was already coming into the sanctuary. New Light, Dor Hadash and Tree of Life members sat at the front of the room as Beth Shalom members and others filled in behind. They hugged and kibbitzed as though they could have done it for hours. When they embraced, they practically fell into one other’s arms. By the Torah service, it was filled beyond even its Yom Kippur crowd.

The week has worn everyone down. Not everyone is sleeping through the night yet. Many of the precious objects of Shabbat — prayer shawls, prayer books — are still trapped inside the crime scene at Tree of Life, and may not be useable when they reemerge.

The media hasn’t helped the exhaustion, the congregants say. Victims ascribed to the wrong congregation. Misspelled names. Misreported facts. (Rose Mallinger was not a Holocaust survivor; there was no baby naming or bris last Shabbat morning, the congregants say, as was widely reported.)

And members of both New Light and Dor Hadash feel that their communities have been falsely subsumed into Tree of Life, whose name is on the building where they hold their independent services. As of Friday evening, Tree of Life’s GoFundMe campaign had reached over $1.1 million. New Light’s is nearly at $17,000. Dor Hadash has yet to crack $3,000.

“The world does not understand what we are doing and what we are going through,” Cohen, the co-president of New Light, had told his congregation Friday evening. “That’s just the way it has to be right now.”

But as the morning service began, the congregants let the routine of Shabbat prayer guide them through.

At 9:52, the congregation observed a silence of one minute and 11 seconds, exactly one week since Myers had called 911. Besides for the sounds of tears, the sanctuary was quiet.

The first group called to bless the Torah before it was read were the survivors. After the reading, they recited the prayer birkat hagomel, traditionally read by people who have survived near death experiences. They blessed God for giving them goodness. The congregation responded, in Hebrew, may you be rewarded with goodness forever.

After the services ended, the congregants spoke of how wonderful it was to see this united community united still, and able to fill up a legendary sanctuary built for a much larger congregation than lives in the space today.

“To see a service full of Jewish people taking up every seat, it’s profound,” said Eleanor Nathanson, a member of Beth Shalom. “It felt like our ancestors have been here all week.”

Departing congregants passed out onto Beacon Street to a bright and windy fall afternoon. A row of four police officers stood by the door; as the congregants walked by, many offered their gratitude.

Outside, Rose Gerson, a Tree of Life member, waited for her husband. While he napped after a sleepless night, she was going to meet a childhood friend.

“I don’t know if I could look out her without crying, but I think I can,” she said. “And then I’m going home to rest.”

She had a final goodbye with Stephen Weiss, who was in Tree of Life during the shooting, and his teenage son Jonah.

“I’m hanging in,” Weiss said when asked how he is doing. “I’m like everybody, still in shock.”

The tallit Weiss carried with him hadn’t been out of its bag for 22 years before that morning — it was his father’s. His own was still at the crime scene. Being able to wear it today, he said, was an honor and a reassurance.

“It was nice to be wrapped in something of my dad’s,” he said.