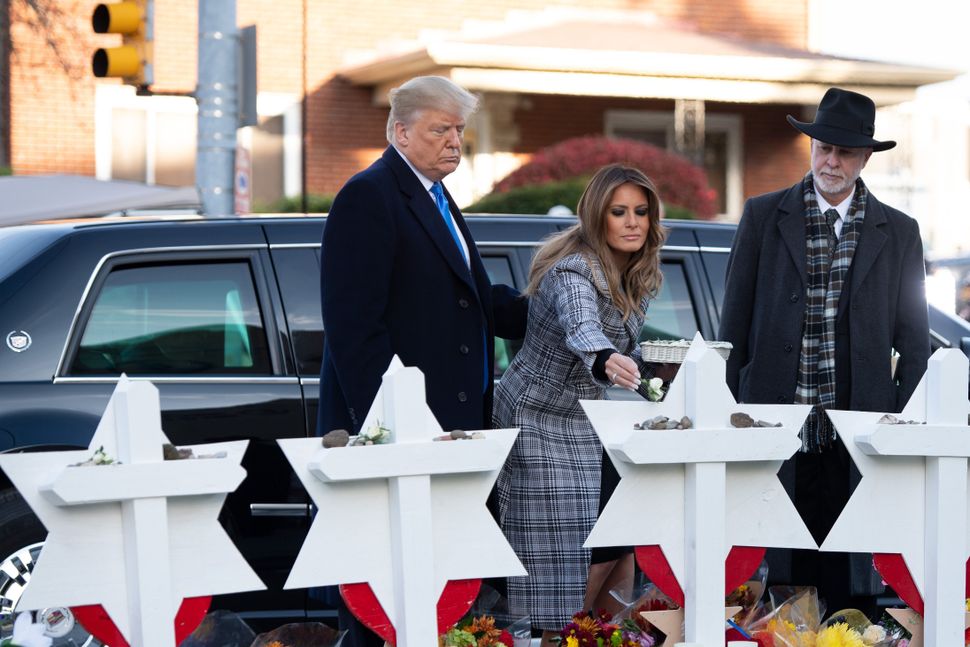 Shabbat was approaching, but Rabbi Jeffrey Myers didn’t have time to write his Saturday morning sermon.

And this wasn’t just any Shabbat — it was the first Shabbat after the shooting that killed seven of his congregants, and four others.

But on Friday afternoon, he officiated at a funeral. Then he was attending a shiva for one of his slain congregants. He was going to lead services on Friday night. No time to write an outline, no time to even jot down a few notes.

“I just had to trust myself that God would inspire me to say the right words, in the right order, at the right time,” he told the Forward.

Myers was the Jewish leader in Pittsburgh who most visibly welcomed President Trump to the city, and did so against the wishes of many in the Jewish community there. That first Shabbat, merely a week after the massacre, he felt inspired to explain why he felt that his welcome of the president was a decision apart from politics — despite the fact that some hold Trump accountable for the shooting.

“Hate is not about politics,” Myers told the Forward in a phone interview. “It’s never been about politics. Hate is across the board.”

He spoke at Beth Shalom, Pittsburgh’s largest Conservative congregation, where the three communities who lost 11 of their most stalwart members had gathered for a joint service. Few direct mentions to the people gunned down inside Tree of Life last week were made — the atmosphere was of coming together and praying, not mourning.

Myers’ sermon was an eloquent, impassioned call to his community to meet hate with love — no matter who, no matter when or where. He was the only leader who spoke that morning who directly referenced the president.

Pittsburgh’s feelings about Trump have been raw since the immediate aftermath of the shooting, when Trump suggested that the outcome would have been different if the synagogue had had an armed guard. Many in Pittsburgh and outside the city felt he was blaming the synagogues.

For Myers, the sermon was his one chance to address Trump’s visit without having the news media as a go-between. Over 2,000 people protested Trump’s visit. The nephew of a man nearly killed in the shooting said Trump should stay away. Pittsburgh’s mayor said the same.

In his sermon Saturday, Myers described his conversations with Trump, Melania Trump, and Jared Kushner and Ivanka Trump. He told of taking them into the synagogue, where there are pools of blood on the floor and rooms utterly destroyed by semi-automatic gunfire. He discussed their reactions to the scene, and to his own personal story of skin-of-his-teeth survival.

Myers’ feels that his decision to speak with the Trumps was an apolitical decision, even in the era of the #Resistance, even a week before the most hotly contested midterm elections in American history. He says that politicians and public figures across from all sides of the political spectrum are responsible for the rise of hate speech.

“I don’t foist blame on any one person, persons, political party,” he said.

He added that his urge to treat the president as he would any other person was driven by his faith.

“I always feel that there’s room for respectful debate and conversation… whether it be the president of the United States or an ordinary citizen,” Myers said.

At the close of his speech, he exhorted the communities gathered at Beth Shalom to reach out in love, and not hate. He stressed that he was not referring to the protests of Trump.

“When you think hate speech is coming from one group, and your response is hate speech, you’ve sunken to that level and you’ve become just as bad,” he said.

When he finished speaking, he received a standing ovation from nearly all of the 1,000 people in the synagogue’s main sanctuary.

Myers acknowledges that the news cycle has already moved on from Pittsburgh — to another shooting, to the midterms and beyond. No matter, he says, since his work will remain here, healing people here. He hopes that somewhere his message got through, ideally to some elected official of some level of government. He hopes that the 11 did not die in vain.

“We have no control of the story,” he said. “We can just tell the story and hope that perhaps this could be a watershed moment in the United States.

His message to the people of Pittsburgh, and to anyone else who wants to stop hate speech, is that there are two options for how to respond to the massacre. One is to stay at home with a bottle of Scotch.

“The other option is to speak up loudly and forcefully for all that needs to be right and good in our country and our lives,” he said. “That’s the choice my tradition tells me. And that’s the way I went. And I’ve never looked back, and I’ve never regretted it.”

_Author’s note: This reporter attended the Saturday services at Beth Shalom, and respected a pre-arranged request to keep all public statements made there off the record. Myers agreed to speak to the Forward about his speech, but declined to let the Forward publish this reporter’s notes of his sermon.