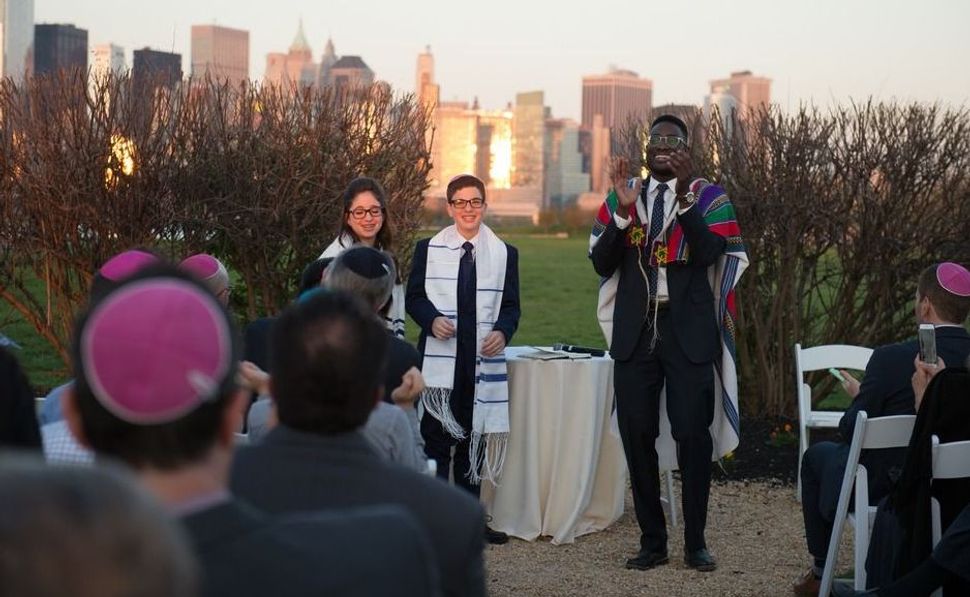 Yehuda Webster has a routine when it comes to Torahs.

Just about every month, he picks up a rented Torah in a plastic sleeve from J. Levine Books and Judaica in Manhattan. He uses the Torahs for the bar and bat mitzvah ceremonies he arranges through an organization he founded, for families that don’t belong to a synagogue. Then he gets in a Lyft and returns the Torah to J. Levine.

On Monday, that routine was ruptured.

That morning, he walked out of his apartment in the heart of the heavily Hasidic Brooklyn neighborhood Crown Heights, Torah in hand. Almost immediately, Webster, who is black, was confronted by a Hasidic man who Webster says demanded to know where he was going with the Torah. Webster shrugged him off, telling the man it wasn’t his business.

By the time Webster got into his Lyft at a nearby intersection, several more men were accosting him. When the Lyft driver tried to leave, a car swerved in front of the car, trapping them.

“And that’s when things got really scary,” Webster told the Forward.

A crowd of over 20 quickly materialized. Hasidic men with walkie-talkies told each other the Torah was in the backseat. Webster’s roommate ran out of their building and they both tried to explain what Webster was doing with the Torah, but the men simply yelled back at her, according to the roommate’s account of the incident posted on Facebook. Webster says he was terrified.

The chaos finally ended after two police officers broke up the crowd around the Lyft and allowed them to leave.

On Thursday afternoon, Webster posted his account of the incident to Facebook. It went viral, receiving thousands of shares and hundreds of comments across social media, and has re-opened a long-simmering debate online about racism in the Hasidic community. Webster, a dedicated social justice activist, says he hopes to start a dialogue with the men who accosted him.

But many Hasidic Jews — even those who bemoan what happened to Webster — refused to say that the Hasidic men were wrong to confront him. Instead, they assert that anyone in Crown Heights would have stopped someone carrying a Torah on the street, regardless of their skin color.

“I’m not saying there’s no racism in the community,” said Mendy Pellin, a Hasidic comedian who plans to host a dialogue between Webster and the Hasidic men who cornered him. “But in this specific incident, if it were a white person, the same exact thing would have happened.”

Webster was born in Guyana to a Christian pastor. When he was eight years old, he and his family converted to Judaism at Congregation Oheb Shalom, a Conservative synagogue in New Jersey. In 2017, at the age of 24, he was named one of the Jewish Week’s “36 Under 36” list of emerging Jewish leaders for his political and social activism and for founding the B’nai Mitzvah Campaign, through which he tutors prospective b’nai mitzvah students who are not members of a synagogue.

“He’s a charming, spiritual, engaging, really a wonderful human being,” said Danny Levine, owner of Levine Books and Judaica. “He’ll come in and pick up the Torah, always with a smile, always with pleasantness. He’s like one of the nicest customers we’ve ever had.”

Webster has said that what spurred him to become an activist was the experience of being a black person in many mostly or exclusively white environments: his synagogue, his Jewish youth groups, his boy scout troop. Now, Webster says that background has made him a textbook example of the kind of racism he has dedicated himself to purging from the Jewish world.

“My father pointed out, ‘Everything you’ve done in your life has led you to be prepared for this moment,’” Webster said. “In many ways, I was the best person for this to happen to, for this not to go unnoticed and unchallenged.”

Webster has not filed a formal complaint naming the men who accosted him. He also has made efforts to reach out to them. His roommate, Hannah Roodman, happened to have a connection through a mutual friend in Crown Heights to the first man who stopped Webster. Webster texted the man, who he said is also named Yehudah, trying to speak with him. When he didn’t hear back from him after more than a day, he published the Facebook post.

Since then, he says, it’s been “overwhelming.” While many people online have expressed their support for Webster, and denounced racism and xenophobia in the Hasidic world, many Hasidic and Orthodox Jews commenting on the story have challenged the idea that Webster was cornered because of his skin color.

Jewish security and the cops came. No one had any idea he was Jewish. They just saw some black guy with a Torah and panicked. Given the fact that ALL crimes in Crown Heights against Jews are done by POC, can you blame the Jews for panicking when they saw him?

There has been a recent uptick in thefts of Jewish ritual objects in Crown Heights, according to Barry Sugar, a Crown Heights resident and the president of the Jewish Leadership Council, a local not-for-profit. Sugar said that the Chabad world headquarters at 770 Eastern Parkway — across the street from Webster’s apartment — has seen a recent rash of tefillin thefts. While Torahs have not been specifically targeted in the recent thefts, (many synagogues keep their Torahs in locked safes) Sugar noted that Torahs are highly valuable objects, which can retail for $50,000 or more.

“This has nothing to do with the color of the guy’s skin,” Sugar said. “That [the instinct to stop him] would be pretty universal, due to the high value of the Torah and due to recent thefts.”

Pellin said that the men did not show Webster empathy, but did not fault the men for stopping him.

“What I’m assuming is that there were some young hotheads who did not help the situation de-escalate,” he said. But, he added, “We’re in New York. If you see something, you say something.”

He noted that Webster was not carrying the Torah wrapped in a tallit, as is customary when bringing it outside of a synagogue.

“If that was the issue, I could understand,” Webster said. “But that’s not what they said to me. They didn’t say, ‘Where is the tallit?’ They said, ‘Why do you have a Torah?’”

Some commenters online have suggested that Webster was stopped because he did not “look Jewish,” or have asked if he was wearing a kippah. But Webster says that in his experience, his skin color overrides his appearance when it comes to coming under suspicion in Jewish settings.

Once, he says, after facilitating a bar mitzvah at the historic Eldridge Street Synagogue in Manhattan’s Lower East Side, a man stopped him as he walked out of the building holding a Torah, demanding to know why he had the holy scroll. At the time, Webster says, he was in a suit and had a kippah on.

“I know a lot of folks are posting like, I didn’t present as Jewish,” he said. “But in my experience, presenting as Jewish doesn’t really matter. That’s not the factor at play here.”

Webster admits that he did not respond amenably when confronted by the first man.

Since putting up the Facebook post, Webster and Roodman say they have been taken aback by the level of pushback they have seen from Hasidic commenters online.

“It’s sad and maybe a little frightening when it’s like, oh, shit, is this going to make people more polarized from each other?” Roodman said.

Webster still hopes to speak directly with the men who cornered him, and wants the incident to be a jumping off point for further reflection on race and racism across the Jewish community. Pellin, who host an online satirical news show, says he is planning to host a conversation between Webster and several of the men who cornered him in his studio.

Webster says that he already knows of friends of his within the Orthodox community who are reaching out to leaders there to try and raise awareness about Webster’s confrontation.

“Baruch hashem, the community is strong, and folks are doing the work of leaning into those relationships,” he said.

Though he is wary of this incident taking over his already busy life of tutoring, activism and teaching, he says he has an obligation to make his voice heard.

“This is the time to practice what I preach,” he added.