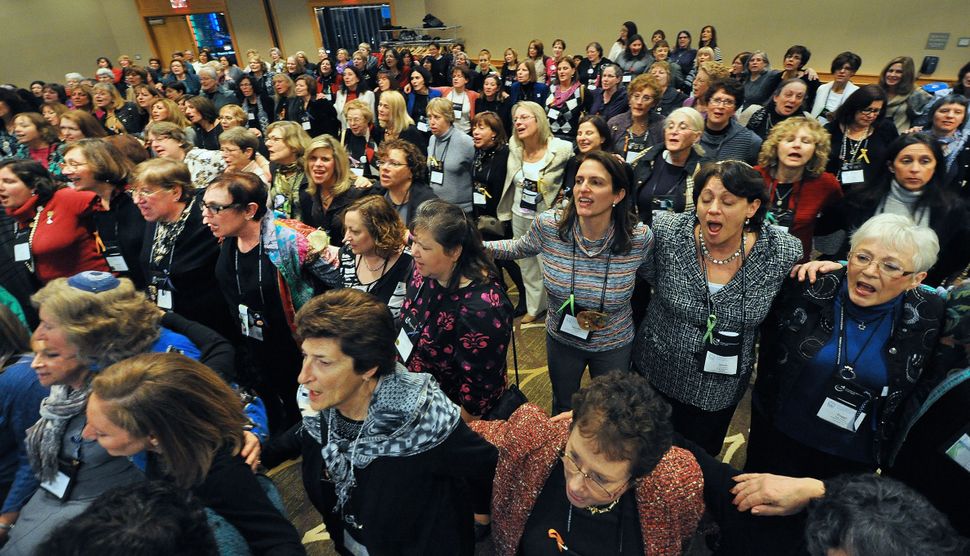 Attendees singing at the WRJ’s national conference in 2013. Image by Women of Reform Judaism

Congregation Shaarai Shomayim, in Lancaster, PA, is one of the oldest continually operating congregations in North America. Its cemetery has graves from the colonial period. Its sisterhood was founded in 1894.

But when that sisterhood decided a couple years ago to try to attract younger members, they changed their name — the Temple Sisterhood became Women of Shaarai Shomayim — and came up with a new tagline: “Not your bubbe’s sisterhood.”

“Nothing is sacred,” said Rosanne Selfon, 70, a co-president of Women of Shaarai Shomayim. The sisterhood “has to evolve,” she added.

These days, sisterhood leaders in the Reform movement are feeling hopeful about the future despite the fact that in the past fifty years they have lost about half their dues-paying members. They think their national umbrella organization can do important political work in the era of President Trump and #Metoo. But the fate of local chapters remains uncertain.

“The landscape of Reform Jewish life is changing, and what it will be, I don’t know,” said Rabbi Marla Feldman, executive director of Women of Reform Judaism, the umbrella organization for the movement’s sisterhoods. “But we will find progressive women wherever they are, and we will work to build a network for their voices.”

Historically, sisterhoods served a dual function — social and political. They arose in the late 19th century, when women organized to provide shelter, housing and jobs to the influx of Jewish immigrants from Eastern Europe. After World War II, they essentially created the modern synagogue calendar, according to Rachel Kranson, an associate professor of Jewish studies at the University of Pittsburgh: Shabbat luncheon, adult education, Hebrew school. During the Civil Rights Movement, sisterhood groups in places like Atlanta and Little Rock advocated for desegregation and participated in anti-lynching campaigns. 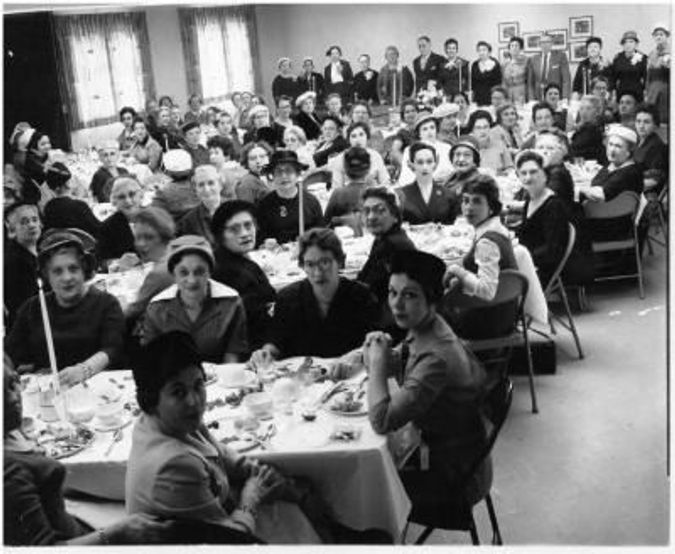 The women of the North Avondale Synagogue Sisterhood, in Cincinnatti, OH, meeting in an undated photograph. Image by Cincinnatti Judaica Fund

Sisterhoods have been a “launching pad for women’s public identities both inside Judaism and in the wider society,” said Karla Goldman, a professor of Judaic studies at the University of Michigan.

The WRJ’s dues-paying membership, however, peaked in the 1960s at about 80,000 and is now down to about half that. At the organization’s 2018 leadership conference, over half the women were over 60 years old. Sisterhoods in the Conservative movement, American Judaism’s other major non-Orthodox denomination, have followed roughly the same trajectory.

The WRJ recently wrapped up several weekends of regional conventions. They featured leadership training, spirituality workshops, fundraising tutorials and “shmoozing time” for playing mahjong and canasta. The same question loomed over nearly every conference, said one of the regional presidents, Annice Benamy, and other attendees: How do we reach the young people? 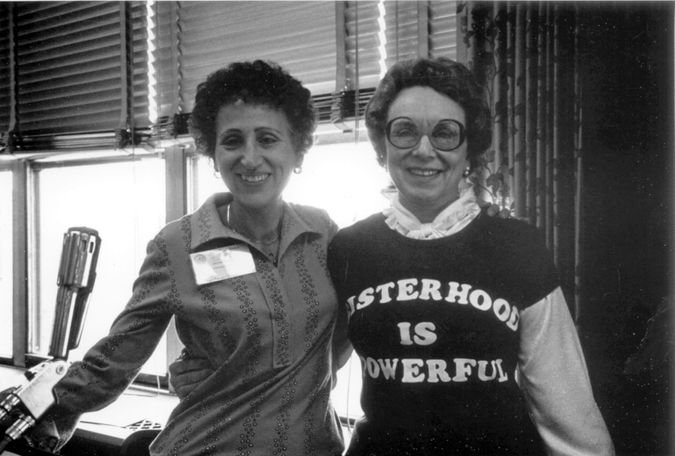 Connie Kreshtool and Lillian Maltzer, the vice president and president of the National Federation of Temple Sisterhoods, the WRJ’s predecessor organization, in 1979. Image by The Jacob Rader Marcus Center of the American Jewish Archives

One perceived problem is the association of sisterhoods with their heyday in a more patriarchal era, when most of the women in them didn’t pursue professional careers. To address this issue, many, like Shaarai Shomayim, have changed their names. Some have stopped presiding over food preparation for post-Shabbat luncheons. Others have partnered with synagogue youth groups, to seed sisterhood interest in teenagers.

And while it’s true that women in their twenties see sisterhoods as something older women do, there’s also a logistical obstacle: Most women in that age group who aren’t Orthodox don’t belong to synagogues or even attend one regularly, said Molly Tolsky, the editor of Alma, a website for Jewish millennial women and non-binary people.

On the other hand, the sisterhood leaders who see a new relevance for their network on the national level may be right, said Tolsky, 32.

“Right now especially, women are all about forming alliances with each other,” she said, not so much to make friends, but to organize politically.

Indeed, in the last few years, the Reform movement has experienced a surge of interest in the WRJ due to focus on women’s issues and gun control. The WRJ facilitated this by opening membership to anyone wanting to be involved, from individual members to women’s groups not affiliated with synagogues.

Attendance at conferences has gone up in recent years, from 180 in 2011 to 324 this year, according to the WRJ’s website, as have private donations, Feldman says. As income from membership dues has declined steadily, the organization has shifted to seeking donations from individuals and charities to meet its $2 million yearly expenses. The organization is planning a national social justice conference for May 2019 in Washington, D.C., which will happen in the days leading up to the conference for the Reform movement’s political advocacy arm.

Kathryn Fleisher, a sophomore at the University of Pittsburgh, is on the planning committee for the WRJ’s 2019 social justice convention, and has become a kind of poster child for the organization.

Fleisher, 20, got involved with WRJ after being president of the Reform movement’s international youth group, NFTY. She says that she appreciates the WRJ for being a non-partisan political advocacy group for women, and one that doesn’t come with the same baggage for Jews as the Women’s March, which has been accused of anti-Semitism because some of its leaders refuse to disavow Louis Farrakhan.

She is not a member of a local sisterhood, and said that if the WRJ wants to bring in younger women, they have to further let go of hoping that those people will come through synagogues.

“Being involved in a local community is not as important to me as being connected to the national entity,” she said.

Feldman insists that the WRJ is not leaving sisterhoods behind, but simply opening up its tent to women who want to skip the local sisterhood or synagogue membership. She says that spirituality and leadership training — longtime interests of local chapters — remain key to WRJ programming.

“There is still a lot of work to be done in that arena, to really help women have the confidence and skills that they need to get on that leadership track, whether in their personal or professional life,” Feldman said.

And even within those local chapters, many women are able to find community and sorority.

“These kinds of organizations … remain really vital places for some groups of American Jewish women,” said Pamela Nadell, the director of the Jewish studies program at American University and a historian of sisterhoods. 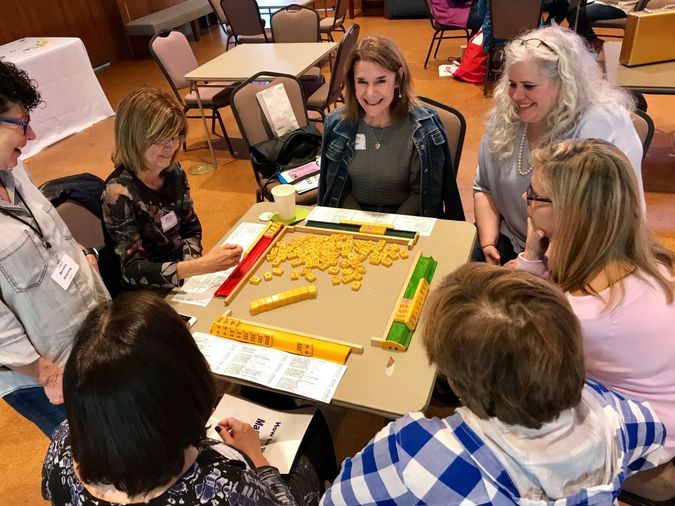 The Women of Shaarai Shomayim hosted a Tapas, Tequila and Trivia this night earlier this summer. Selfon said that most of the attendees were younger women in their 30s and 40s.

“We really want women to have a place that’s safe and fun to be together, without the stress of kids and family and their work lives,” said Selfon, who was once the president of the WRJ’s predecessor organization, the National Federation of Temple Sisterhoods.

But experts worry that with decreasing membership, the groups could lose the political power and social influence they have wielded for generations.

“It should be clear: you don’t want to lose the potential of these organizations,” Goldman said.