A Tax Break For Rabbis Might Be Unconstitutional. Can They Make Ends Meet Without It? 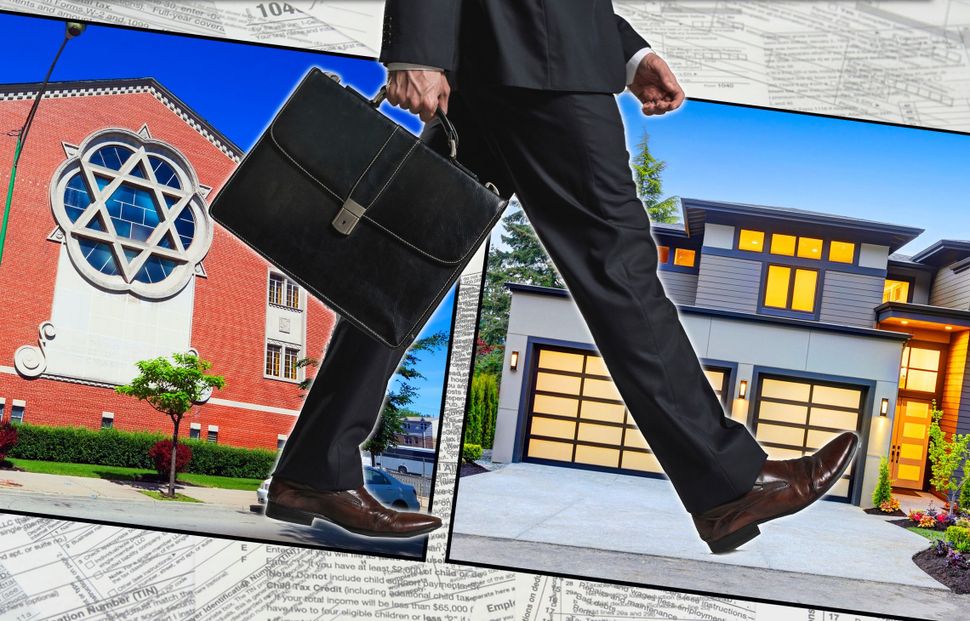 What does Rabbi Aviad Bodner, leader of Manhattan’s historic Stanton Street Shul, which seats 400, have in common with televangelist mega-preachers whose sermons reach millions of people around the world?

All get a tax break on their housing costs — despite the fact that Bodner rents a two-bedroom in Manhattan’s East Village with his wife and children, and some televangelists enjoy multiple homes worth millions of dollars.

That’s because they, like other faith leaders, can take advantage of Section 107 of the United States tax code: the parsonage exemption. It’s helped ease the budgeting woes of rabbis around the country for over six decades.

But the parsonage exemption is in jeopardy. Last year, a court ruled that it’s unconstitutional, and breaches the separation of church and state. Now a federal appeals court is set to decide in early 2019 whether that’s the case. Rabbis and synagogues say the exemption is how they make ends meet, and that getting rid of it could mean lower salaries for clergy in Jewish communities of every denomination.

“Our rabbis would be quite disappointed, perhaps even devastated to see this go away. It’s obviously something that we all rely on,” said Rabbi Debra Newman Kamin, the head of the Conservative movement’s rabbinical organization, the Rabbinical Assembly.

Here’s how it works. Contracts for clergy nearly always have a parsonage exemption clause: an agreed-upon amount of money that the clergyperson expects to spend on housing that year. When doing their taxes, the clergyperson gets to deduct that amount, or whatever they actually paid in housing costs, from the total salary they pay federal income tax on. IRS regulations state that the exemption covers the sum of the fair market value of everything from a down payment on a house to the cost of a Roomba. The exemption extends to any ordained religious teacher or cantor, and to any clergyperson who helps with the “maintenance of religious organizations.”

For example, say Rabbi X makes $100,000 a year, and spends 40% of that — $40,000 — on housing costs. When filing taxes for 2018, Rabbi X will be in the 22% federal income tax bracket. Their federal income tax savings from the exemption will be equal to 22% of $40,000 — $8,800. However, since rabbis are frequently employed as individual contractors, and file self employment taxes, their overall tax savings can shake out to about half that.

The exemption benefits synagogues at both ends of the economic spectrum, since it allows them to pay rabbis less, knowing that the salary will stretch further after being only partially taxed. For large synagogues, or those in cities or neighborhoods where renting and owning can be prohibitively expensive, the exemption can keep rabbis from getting priced out. Small synagogues that may not have enough members to compensate a full-time rabbi can more equitably offer lower salaries.

“Our shul definitely does not have money coming out of our ears,” Bodner said. He said that losing the exemption “means your salary is being cut by a significant percent, or your living expenses are raised.”

Because of their usefulness, parsonage exemptions are standard in contracts for rabbis across Judaism’s religious spectrum. The Conservative movement’s sample contract for pulpit rabbis includes a space for the amount designated for the exemption, as does a sample contract from Agudath Israel of America, an ultra-Orthodox lobbying and education group. (The Conservative movement notes that heads of day schools should get the exemption as well.)

The current lawsuit over the exemption, now being considered by the U.S. Court of Appeals for the Seventh Circuit, has brought many different religious groups together in the hopes of saving it. One amicus brief supporting the rule was signed by Catholic, Baptist and Unitarian groups, as well as the rabbinical associations of the Conservative and Reform movements. Several international Orthodox groups signed onto a separate amicus brief.

“Parsonage allowance is something that is very heavily used in our community,” said Mordechai Biser, special counsel of Agudath Israel. “It’s something a lot of rabbis and rebbes are who are teaching in schools take advantage of.”

Rabbinical groups have argued that the exemption is necessary because clergy in the pulpit must live near their synagogue: they’re always on the clock, always running back and forth between synagogue and home, constantly hosting events in both places. And many Jewish clergy, including but not limited to the Orthodox, must live within walking distance of their synagogue because religious law prohibits driving on the Sabbath.

“The ministry, in all faiths, is often an underpaid profession for people who are on call, seven days a week, 24 hours,” said Rabbi Ronald Schwarzberg, director of placement at Yeshiva University’s rabbinical school. “This is a simple way of increasing the value of the minister’s’ salary package.”

“I know other people entertain in their homes, but I probably have congregational events in my house every month,” said the Conservative movement’s Kamin, who leads a congregation in a wealthy Chicago suburb. “And I don’t just mean a small dinner for a few people. I mean open houses, holiday celebrations.”

Kamin estimated that she reserves 30% to 40% of her income as a parsonage exemption on her taxes, and says that removing the exemption would have a dramatic impact on her and other rabbis’ finances.

“What would happen is that rabbis’ salaries would be cut significantly,” she said, and congregations won’t be able to make up the difference.

Rabbi David Ingber, leader of the unaffiliated congregation Romemu, in Manhattan, said that the exemption makes a large difference in his personal financial accounting. He noted that besides paying New York City rent, he and other city rabbis usually want — and are expected to — send their kids to expensive day schools and other Jewish programs.

“That extra couple of thousand dollars a year went a long way towards helping my kids go to summer camp,” Ingber said.

Opponents of the rule say it is a clear breach of the First Amendment of the Constitution, which holds that the government cannot either directly benefit or interfere with religious expression.

“It’s a core state-church [separation] issue,” said Patrick Elliott, a senior counsel for the Freedom From Religion Foundation, which brought the current case. “Is the government lending financial support to churches? By the tax code, that’s what they’re doing here.”

The rule is essentially unfair to everyone who is not clergy, according to Adam Chodorow, a professor of tax law at Arizona State University, who last year authored an amicus brief supporting the Freedom From Religion Foundation’s position.

Trying to solve that problem — asking the government to identify who is an actual “minister of the gospel,” as the tax code puts it in Section 107 — would only present more First Amendment issues, in the form of government interference in religion, Chodorow added.

Chodorow also said that while rabbis argue that the nature of their work means they need to live close to the synagogues, that is true of other professionals, like doctors and firefighters. That presents a “slippery slope” problem, he said.

“Congressmen could say, ‘I need to live in my district, therefore I need tax free housing,’” Chodorow said.

Closing the exemption would give the U.S. Treasury an added $800 million to $1 billion a year — a small slice of the nearly $1.7 trillion the federal government receives from income taxes each year, but still a significant number, Elliott says.

“Any average citizen certainly views a billion dollars a year as quite a large amount of money,” he said.

A solution to the problem of funding rabbis could be for Congress to write another tax exemption rule, one more broadly aimed at professionals who need to live close to their job sites. Rabbis like Ingber say they would support such a rule, and Elliott said the Freedom From Religion Foundation might as well.

“Both non-profit employees and ministers should pay the same taxes as everybody,” Elliott said. “But if congress changed the rule to provide an exemption for not just ministers, we would be fine with that.”

Observers say it’s not clear how the three-judge appeals court will rule. According to Chodorow, one of the judges gets many of his clerks from Regents University, a private Christian church. Elliott said that the Freedom From Religion Foundation is “cautious” about the outcome of the case.

But regardless of the decision, for some rabbis, the church-state fight over parsonage is somewhat misdirected.

“When we can remove the Christmas tree from the White House, then we can have a conversation about the separation of church and state,” Kamin said.

Update, 11/30/18, 8:00 a.m. — This article has been updated to note that because rabbis are often individual contractors, their tax savings can be less than the full amount exempted through the parsonage exemption.

A Tax Break For Rabbis Might Be Unconstitutional. Can They Make Ends Meet Without It?