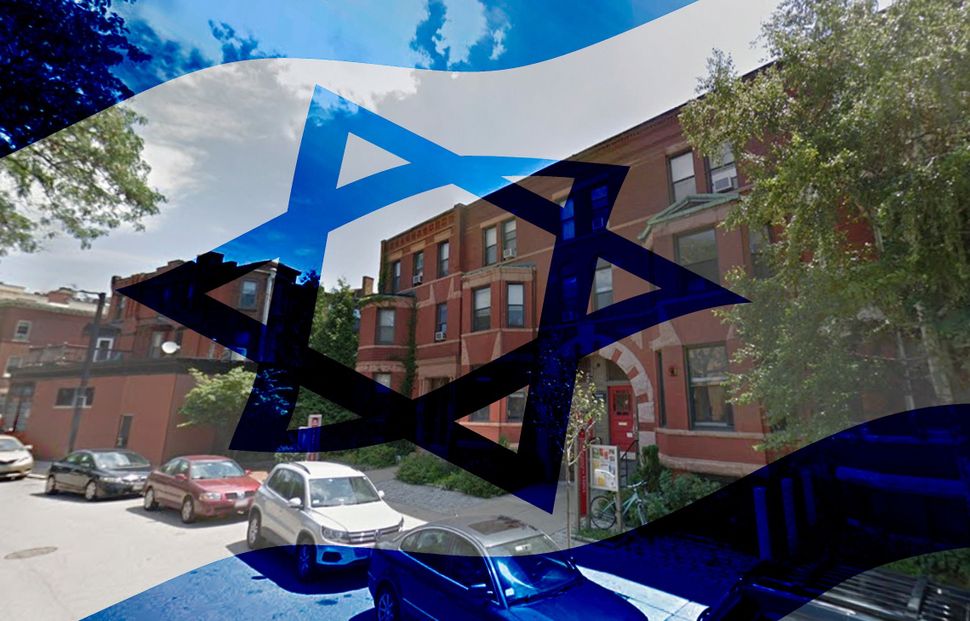 When Ben Novak arrived at Northeastern University in Boston as a first-year student in the fall of 2016, he went looking for a place to pray, and meet other Jews. So naturally, he turned to the local Hillel.

But a few months later, the Hillel descended into chaos amid complaints from students that it was focused too much on Israel and not enough on things like celebrating Jewish holidays or studying Jewish texts.

So Novak helped create the Jewish Student Union, which only does Jewish educational programming and doesn’t touch Israel at all.

Northeastern students and alumni – even many who proudly say they love Israel — have been saying for years that their Hillel overemphasizes the Jewish state. The school’s Hillel is tasked with serving all 800 of the school’s undergraduates, about 6% of the total population. Yet Jewish campus life there is fractured and fraught, with older students boycotting and newer ones forced to rebuild. Relationships between staffers and students have improved, but two years later, the JSU is still in business.

“I would like JSU to be redundant,” Novak said. “I would like everything to go through Hillel and have students be comfortable there.”

It’s a situation that reflects broader tension over the role of Israel in Jewish life – but the situation at Northeastern is extreme.

Northeastern Hillel executive director Gilad Skolnick told the Forward in an email that his organization is succeeding at bonding with Jewish students.

“We spent a great deal of time connecting with students, learning about the programming they wanted to see and encouraging them to play an active role,” he wrote.

Tensions around Northeastern’s Hillel exploded in October 2016, when more than 100 students – including the president of the Hillel student board and a member of the Hillel International Student Cabinet – signed an open letter complaining that the Hillel staff was focused too much on Israel and not enough on things like celebrating Jewish holidays or studying Jewish texts.

The entire student board was fired in response, as an article in the Jewish student publication New Voices recounts in greater detail. Hillel officials accused the letter organizers of bullying students and lying to them about what the petition contained, which the organizers denied.

For some months, the organization had no permanent person in charge. And when its board of directors hired a new director, Skolnick, his background indicated that he would intensify the focus on Israel. Students did interview him before he was hired, as well.

Skolnick had previously worked as the director of campus programming for the pro-Israel media watchdog CAMERA. In that capacity, he coordinated pro-Israel activities on dozens of campuses and helped train hundreds of students in Israel advocacy.

While at CAMERA, Skolnick was one of at least three employees of Zionist organizations to go undercover to the first Open Hillel conference in 2014 in order to investigate the left-wing campus pressure group.

Staffing at Northeastern’s Hillel also bears out a continued emphasis on Israel. There is a director of Israel engagement and an Israel fellow, but only a Jewish student life associate on the “non-Israel” side. Northeastern Hillel’s ratio of Israel-focused staffers as a proportion of total employees is higher than any other Hillel in Massachusetts, as well as all other Hillels at schools listed in the Forward College Guide with approximately the same Jewish population size and share.

“I think the ratio is problematic,” said Neav Topaz, a second-year student who was just elected to serve as Hillel’s marketing chair, adding, “I don’t think that there’s a good representative on the adult staff of an American Jew, who was raised here and who knows what it’s like to be Jewish here.” Skolnick and the two Israel-related staffers are all Israeli or Israeli-American. Topaz is, as well.

Then, in May 2018, Rabbi Becky Silverstein, who worked as the adviser to the JSU but was employed by Northeastern University itself, was informed his contract was not being renewed — and students think the question of his loyalty to Israel might have played a role in his departure. (Silverstein is transgender and uses male pronouns.)

Skolnick accused Silverstein during a December 2017 meeting of being a “dues-paying member” of the pro-BDS group Jewish Voice for Peace – which Silverstein said is not true, according to another New Voices article. Skolnick admitted to New Voices that he told the university and the local Jewish federation, Combined Jewish Philanthropies, about his concerns.

Silverstein told New Voices that then-CJP president Barry Shrage personally told him that he shared Skolnick’s concerns. A Northeastern spokesperson did not answer the Forward’s question about why Silverstein’s one-year term was not renewed when other spiritual advisers’ terms were.

‘That’s where the money is coming from’

“The priorities of the institution are pointing in Israel politics, because that’s where the money is coming from,” Novak charged.

Multiple people who were on campus at the time of the student board firing say they think the incident, and the Hillel’s disproportionate focus on Israel in general, lay at the feet of Northeastern Hillel board chairman Sheldon Goldman.

Northeastern Hillel’s most recent tax filing shows it had revenue of $435,000 between July 2015 and June 2016. Goldman has averaged more than $25,000 in donations to Northeastern Hillel per year over the past four years. In an email, Goldman said he was proud of the Hillel’s work, pointing to several diverse programs, including the celebration of the Ethiopian-Jewish holiday Sigd.

“NEU Hillel seeks to create an environment where Jewish students are proud of being Jewish and of being a friend of the State of Israel,” he wrote. He did not answer the Forward’s question about his alleged role in the firing of the Hillel student board.

About a quarter of Northeastern Hillel’s donations come from CJP. It’s typical for a Jewish federation to substantially support a local Hillel.

But Northeastern Hillel is also supported by the Maccabee Task Force, the pro-Israel campus advocacy organization founded by Republican megadonor Sheldon Adelson, as well as by the Adam and Gila Milstein Foundation, which supports several Israel-focused organizations, ranging from mainstream groups like the American Society for Yad Vashem to hawkish organizations like the Foundation for Defense of Democracies. Both foundations also support CAMERA. According to the Milstein foundation’s website, they only support four Hillels in the entire country – and Northeastern is one of them.

The Maccabee Task Force’s 2016 tax form lists a $77,000 grant to Northeastern Hillel for “Campus Education and Trip to Israel.” A spokesperson declined to comment about that donation. A Milstein Family Foundation spokesperson said their contributions – which have ranged in the past few years from $1,600 to $11,000 annually – are for general operating support.

Northeastern Hillel offers subsidized trips to the AIPAC Policy Conference each year – as do dozens of other Hillels around the country. Earlier this year, however, it also promoted highly subsidized tickets to the gala of the right-wing Zionist Organization of America.

“Those tickets were offered by ZOA and we marketed the opportunity to students,” Skolnick said. “Hillel did not fund the program.”

But the ZOA staffer who oversees their gala told the Forward that they only provide discounts to student delegations that come to them with requests for tickets, and don’t market the opportunity directly to Hillels.

Asked if he would provide a similar opportunity for students to go to a J Street conference, Skolnick replied, “J Street actively campaigns against our programs such as Birthright and has been caught multiple times spreading false information. We would not promote any organization that seeks to demonize our programming, divide the Jewish community on campus, and spread inaccurate information.”

J Street U is welcomed as an affiliated student club at many Hillels across the country, including Tufts, Brandeis and UMass in Massachusetts.

Some current and former students say the damage is already done.

Olivia Sorenson, a leader of the new campus chapter of the left-wing Jewish group IfNotNow, said that Hillel was “a really hostile place for left-leaning Jews, or even Jews that have questions about Israel politics.”

Asked if he as an alumnus would donate to Hillel if asked, David responded, “Probably not.”

Topaz, the student who will serve as Hillel’s marketing chair, said the staff — not students — is still driving the programming as yet, although that could change with the ascension of the new student board, of which he is a member.

Skolnick pointed to examples of Jewish engagement and education programming, including holiday celebrations and weekly Shabbat services and dinner. “We are actively seeking funding to grow our Jewish education and engagement programming,” he wrote.

Both Skolnick and Novak, who started the JSU, say that Hillel and JSU now have a positive relationship and have promoted each other’s events.

Topaz said he thinks this is an important moment for Jews at Northeastern.

“There’s enough people who feel like, ‘Are we going to be able to execute the things we really want to?’ I hope so,” he said. “I feel like if we don’t, then Jewish life at Northeastern is going to be set back for a long time.”