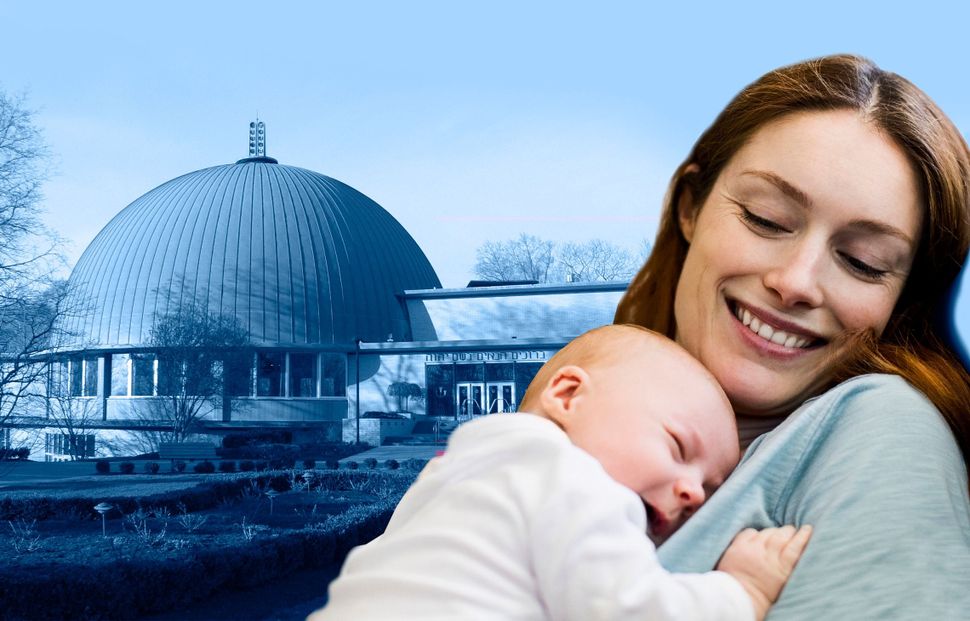 When “Emma,” a director of education at a Conservative synagogue in New York, began to prepare for her upcoming contract negotiations, she went to check the movement’s “Guide to Contractual Relations,” written to help people have such delicate conversations.

She found that while the movement advises synagogues to offer clergy — rabbis and cantors — three months of paid parental leave, it effectively says that full-time educators should receive none. She has resolved to demand that her contract include it, even though she’s not planning to have a family soon. It’s the principle of the thing, said Emma, who asked to be identified by a pseudonym to protect her job opportunities in the Conservative movement.

“It’s just so disturbing that we built our institutions to nurture families, and yet we are setting a precedent that our educators don’t deserve the same,” Emma said.

Many Jews say, half-jokingly, that the first commandment in the Torah is “Be fruitful and multiply.” It’s not one of the Ten Commandments, but is the first thing God tells Adam and Eve to do. Yet fulfilling that imperative can be difficult if you’re a full-time Conservative educator — a position held overwhelmingly by women. As progressive states like New York and California take up the issue of paid family leave Conservative synagogue educators are asking why the purportedly Jewish value of protecting and encouraging families doesn’t apply to them.

Conservative Judaism is a movement that tries to blend modern life with adherence to halacha, or Jewish law. Nearly a fifth of American Jews identify as Conservative, according to the Pew Research Center’s 2013 Portrait of American Jewry.

The guide Emma consulted is a publicly available document, offered by the movement’s umbrella organization, meant to provide a starting point for negotiations between synagogues and their employees. Created in 2009, it features model contracts from the respective professional organizations for Conservative rabbis, cantors, executive directors and full-time educators. It also includes a model contract for youth directors.

The document advises synagogues to offer clergy three months of paid parental leave, and give executive directors and youth directors leave benefits consistent with that of other synagogue employees.

But in the case of educators, the document advises that the synagogue “minimally follow federal law for parental leave.” But the federal law guaranteeing parental leave only applies to firms with 50 or more employees — a threshold that hardly any synagogues meet, according to the Brandeis study.

There are roughly between 600 and 1,000 full-time synagogue educators in the Conservative movement, according to Edward Edelstein, executive director of the Jewish Educators Assembly, a professional organization for Conservative Jewish educators. They are typically responsible for helping run the synagogue’s religious school programs, nursery school and adult education.

The United Synagogue guide is not binding on any synagogue. But experts say it sets a precedent that can make successfully negotiating for parental leave as an educator or synagogue director difficult at best.

“Educators have always been treated as second-class citizens, and the United Synagogue has in many ways perpetuated that,” said Sara Shapiro-Plevan, an educational consultant who moderates the Facebook group JEDLAB, a 10,000-member forum for Jewish educators.

Shapiro-Plevan traces the discrepancy between parental leave benefits for rabbis and educators to ongoing inequality between male and female professionals in the movement. Over 80% of Jewish day school educators are women, according to a 2006 study, which has the latest gender data on Jewish educators, according to the study’s lead investigator.

“Males and male rabbis have outsize leadership roles, and women do not,” Shapiro-Plevan said. “The fact that parental leave [for educators] is not on their [the United Synagogue’s] radar doesn’t surprise me.”

The guide is being revised this year, according to Ed Rudofsky, the chairman of the movement’s Committee on Congregation Standards.

In response to emailed questions from the Forward sent early this week, Rudofsky said that the committee will look to revise the guide’s recommendations for parental leave for educators.

“These emails that I’ve seen are the first time that this issue has been raised, at least to me,” Rudofsky said in an interview.

Offering the right benefits, including parental leave, is about showcasing both good Jewish values and general employment best practices, according to Rabbi Elliot Schoenberg, the associate executive director of the Rabbinical Assembly, the Conservative movement’s professional organization for rabbis.

“As a value, we find that you want people to be able to have the time that they need to be able to take care of themselves so they can have a work/life balance,” Schoenberg said.

The USCJ’s guide does recommend that synagogues offer other benefits to educators: a one- month vacation, health insurance and matching 7% of the employee’s 401k contribution.

“Congregations for the most part want to do the right thing, within whatever limits that they have,” said Schoenberg.

Alissa, (a pseudonym) a director of early childhood education at a synagogue in Maryland, said that none of her colleagues in her professional circle have family leave. When she brought up parental leave in her first contract negotiations, the synagogue’s president and board chair — both women — “acted like they’d never heard of it before,” she said.

“It’s a mitzvah to have children,” Alissa said. “We should be supporting people who are having them.”

When a baby does come, some educators are forced to choose between their jobs and their new child. Others are able to piece together a half-time or three-quarter-time arrangement. Doing that can be harder for women, since women tend to allocate twice as much time for infant childcare than fathers, excluding time for feeding and pumping breast milk, according to a 2013 study.

“What really happens is that people who have to make this choice do so by cobbling together the benefits that are offered through their workplace, sick leave, unemployment and the generosity of their communities,” Shapiro-Plevan said.

Emma says that she is still preparing for her contract negotiations. She is hopeful that her synagogue will honor her request for paid family leave, since she says they have been accommodating of a disability she has.

“It’s just that there’s no guarantee, and that’s what’s scary to me,” she said.