Measles Is Hitting Ultra-Orthodox Communities. Why Aren’t They Vaccinating? 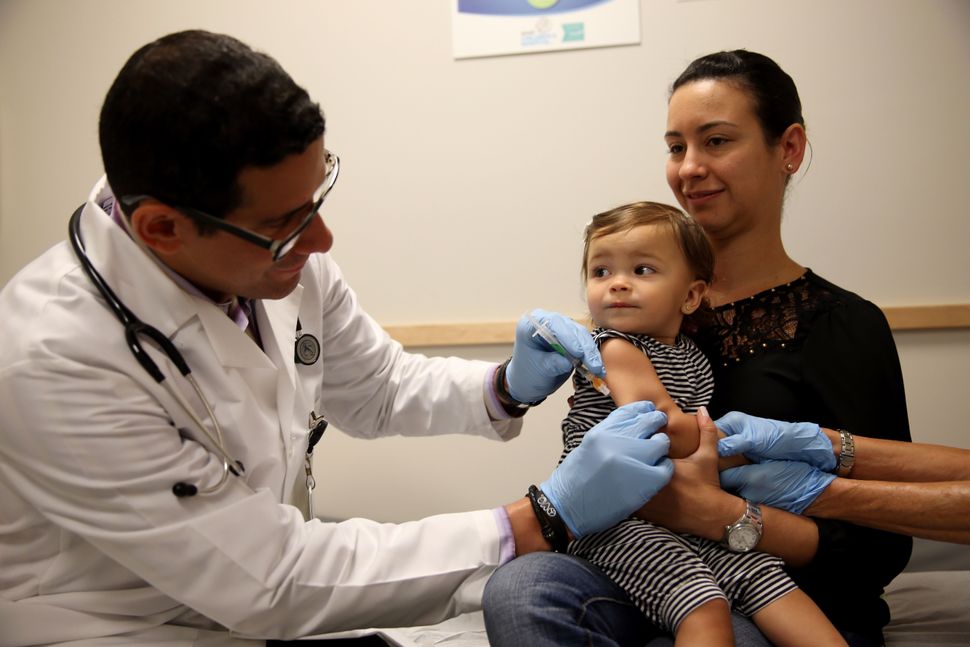 The worst measles outbreak in recent New York history is hitting the Hasidic Jewish community due to low vaccination rates.

With 55 cases in Brooklyn and 116 in two upstate counties since late September, it is the second time in five years that the community has seen a measles crisis. The previous record outbreak, in 2013, was entirely within Brooklyn’s Orthodox enclaves.

Experts say the outbreak has been caused by a mix of ignorance on how and when to get vaccines — common in insular communities — and pockets of stubborn resistance to accepted medical views on vaccination.

“This is not a Hasidic problem, this is an anti-vaccination problem,” said Rabbi Dr. Aaron Glatt, a rabbi and hospital epidemiologist at South Nassau Communities Hospital on Long Island, and who identifies as Orthodox.

Measles is a virus that can travel on bits of moisture in the air, making it extremely contagious. But the reason outbreaks of measles are rare in the United States is because the vaccine that prevents it — the MMR, or measles-mumps-rubella, vaccine — is very effective.

“If you have a room full of people, and someone has measles, 90% of people will get measles if they are not vaccinated,” said Dr. Jennifer Lighter, a pediatric epidemiologist with the New York University Langone hospital system.

The New York outbreak began after Orthodox Jews who were visiting Israel became infected with measles. Israel is experiencing a massive outbreak of the disease, with over 2,000 cases reported as of late November of last year.

In the U.S., outbreak has been almost exclusively contained to the Hasidic community. Hasidic Jews are often characterized by their insularity and rigid social structures. Different segments of the population follow the specific interpretations of Jewish law of their rebbes, or rabbinic leaders. The 2013 Pew survey of American Jews found that around 6% of the American Jewish population identifies as ultra-Orthodox – around 250,000 people total. Most live in New York state.

In New York City, the measles outbreak has been confined to Williamsburg and Borough Park, according to a spokesperson for the city’s health department. (Two cases have been listed in neighborhoods adjoining Borough Park.)

In upstate New York, the outbreak has spread through insular communities in Rockland and Orange counties, where vaccination rates in some schools and day care centers is at 60%, according to New York state health commissioner Dr. Howard Zucker. The state’s overall vaccination rate is 92.5%, according to the Centers for Disease Control and Prevention.

Most of the victims in this outbreak are children under 13, Zucker says, who are most likely to be infected because of their age and because they spend much of their day in close quarters with their peers in yeshivas.

“This is the worst case I have seen in New York state,” Zucker said. “This is exactly what would happen if you have an area where a lot of kids are in the same place, and there’s a low immunization.”

In Brooklyn, the New York City Department of Health has instituted a mandatory exclusion at yeshivas of unvaccinated students. Roughly 1,800 school-age children in the Williamsburg and Borough Park communities are unvaccinated due to having claimed a medical or religious exemption to vaccines, according to the health department spokesperson.

Major Orthodox leaders in Brooklyn have encouraged Jews to get vaccinated, with some local yeshivas saying they will no longer accept unvaccinated students. The Mir Yeshiva in Jerusalem, the largest yeshiva in the world, told its rabbis and over 8,000 students to “immediately get a vaccine” in November.

“There is, in my opinion, no such thing as a Jewish religious exemption [for vaccinations],” he added.

Lighter, the NYU physician, said that most of her patients are under-vaccinated, meaning they are behind the recommended schedule for receiving vaccinations. Many have foregone vaccination at different times because they erroneously thought it was unhealthy to receive multiple vaccinations at once, or be immunized while they had a cold.

“I don’t really at NYU see a lot of [Hasidic] patients that are adamant about not getting vaccines, I mostly see the ones that are delayed,” she said.

But some ultra-Orthodox believe that there is a connection between vaccines and autism, despite the fact that the CDC says there is none. A major Orthodox rabbi has called vaccines a “hoax.” He and two other rabbis who sit on the rabbinnical board that guides Agudath Israel of America, the leading Haredi umbrella group, have cast doubt on their efficacy of vaccines.

Vaccine skepticism has spread from those leaders to their followers.

“I’ve been practicing medicine and doing research on this topic for years now and I am saying scientifically the truth is known but being covered up,” Yosef, a physician assistant from Crown Heights who was raised in the Chabad movement, a branch of Hasidic Judaism, wrote in an email.

Yosef, 35, said that although he and two of his five children are vaccinated, he believes vaccines cause more harm than good.

“Side effects include death, autoimmune diseases, autism and many things in between,” he wrote. “I don’t think, I know. CDC knows. $4 billion paid to parents by our government since 1986 knows.”

The U.S. government has in fact paid $4 billion over thirty years as part of its National Vaccine Injury Compensation Program. Out of billions of the vaccinations administered in that time period, 20,215 petitions for compensation have been filed, and 6,358 were granted.

Agudath Israel spokesman Avi Shafran said that Hasidic Jews have their reasons for resisting vaccination, pointing to changes in medical opinion like on how frequently to get screen for certain cancers.

“There are many other such ‘medical reversals’ that might reasonably give people pause before trusting medical authorities,” he wrote in an email. “I am not saying that anti-vaxxers are correct, only answering your question.” He added that it was the organization’s policy not to make health recommendations.

In response to the outbreak, the health departments of New York State and New York City have undertaken awareness campaigns for vaccines. Zucker said that the state’s efforts have led to 13,000 children in Rockland and Orange counties being vaccinated since October.

But Glatt says that there is widespread mistrust of the health department in the Hasidic community. He said that some view the department’s response as “anti-Semitic.”

In an email, Yosef, the physician’s assistant, backed that up.

“I don’t see NY department of health as a separate entity; government or healthcare is a group with a general agenda and preach the same religion with no questions asked,” he wrote.

Community leaders, while quick to condemn anti-vaxxers, are just as quick to stress that theirs is not the only group with this problem. In recent years, Somali-American and Amish communities have seen serious measles outbreaks.

“There are unfortunately many different communities across the United States and the world, Jewish, non-Jewish, Hasidic, non-Hasidic, who unfortunately don’t vaccinate,” Glatt said.

Zucker said that the state’s health department will continue vaccinating kids in Rockland and Orange counties until they see a period of no new cases. He added that while at first there was pushback in those communities to the vaccinations, many families have come to accept the immunization campaign.

“People recognize the need for this,” he said.

Update, 1/16/19 — This article has been updated to reflect that only one major Orthodox rabbi, Rabbi Shmuel Kamenetsky, has publicly called vaccines a “hoax,” while he and two other colleagues have separately cast doubt on the efficacy of vaccines in public rulings shared widely in the Hasidic world.

Measles Is Hitting Ultra-Orthodox Communities. Why Aren’t They Vaccinating?