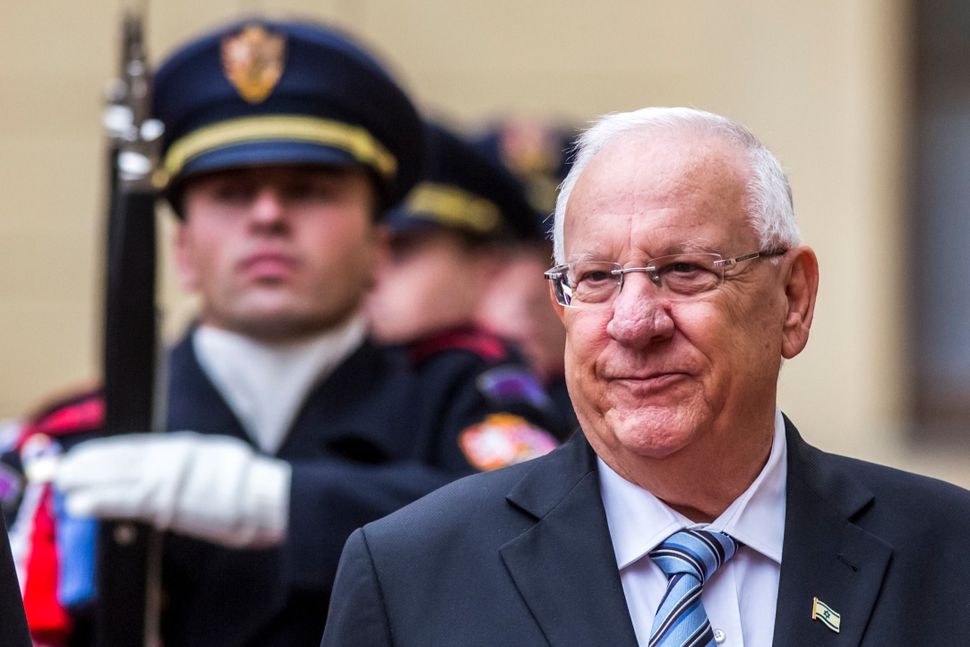 Israeli President Reuven Rivlin wants you to know that he is deeply concerned about the deteriorating relations between his country and Jews around the world, and he plans to do something about it.

Which, in a surprising way, sets him apart from the rest of Israel’s political leadership.

More surprising still, Rivlin seems to understand the Jewish Diaspora despite the fact that — unlike so many of his rivals — he has never lived outside Israel.

Prime Minister Benjamin Netanyahu graduated from high school in suburban Philadelphia, went to college and graduate school in the States, and even was Israeli ambassador to the United Nations. Naftali Bennett, minister of Diaspora affairs, lived as a child in the United States and became rich there, too, after selling his tech company and making what the Israelis call his “exit” before entering politics.

Both of them have repeatedly angered and alienated many American Jews who disagree with their approach to everything from the Iran nuclear deal to the anti-Semitic attacks in Pittsburgh last year. 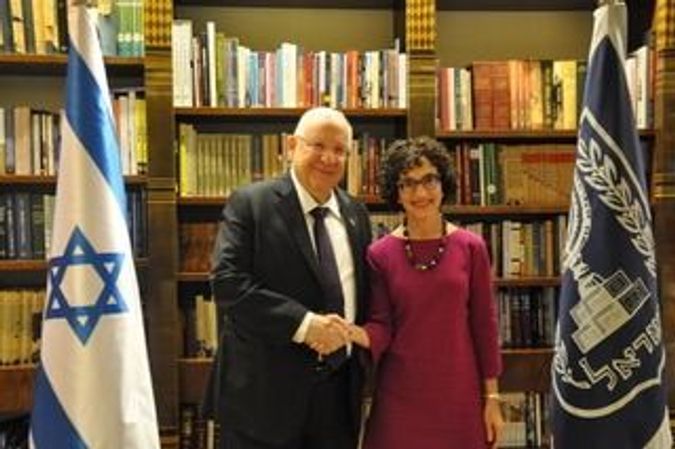 An Audience With The President: Reuven Rivlin with Forward editor-in-chief Jane Eisner Image by Office of Reuven Rivlin

But Rivlin, born in Jerusalem, never left Israel until he was 29 years old, he told me in a conversation at the end of last month in the elegantly appointed Beit HaNassi, the official home of the president in Jerusalem. And yet he has positioned himself as a trusted interlocutor between the two uneasy branches of the Jewish people — half of whom now live in Israel, the other half of whom live mostly in the United States.

“I really believe we are one family,” he said.

At 79 years old, in the middle of his seven-year term as president, Rivlin appears like an avuncular grandfather (albeit one in a dark suit) eager to share stories from his childhood in a tone both insistent and friendly. But he also has not been afraid to express opinions at odds with the ruling government, even though he and the prime minister are both members of the Likud party.

We met in his office, which doubles as a reception area, complete with chairs positioned for conversation and walls lined with books and art work, anchored by standing Israel flags. That morning, he spoke mostly about growing up in a family whose tenure in Israel predates the establishment of the modern Jewish state by nearly a century and a half. His ancestors arrived from Eastern Europe in 1809, directed to Israel by a rabbi who believed the Messiah was going to appear then. The prediction didn’t materialize, but the family put down roots, becoming the first Jews to settle outside the walls of the old city of Jerusalem.

Rivlin was a Zionist from an early age, because he knew nothing else. “My family were pupils of [Ze’ev] Jabotinsky,” he said of the leader who championed an aggressive, some say right-wing, form of Zionism. “The only way to express a Zionist feeling is to come to Israel.” This Zionism could coexist with a healthy respect for, and interaction with, his Arab neighbors; Rivlin was strongly influenced by his father, an Arabic scholar who translated the Quran into Hebrew.

For young Rivlin, the Diaspora was an abstract concept — until the siege of Jerusalem during Israel’s war for independence, when American Jews sent support in the form of Nestle’s chocolate, comic books and bubble gum.

Government was an abstract concept, too — until the Knesset relocated to Jerusalem after the war. David Ben-Gurion, Israel’s first prime minister, lived in the same neighborhood, and Rivlin and his young friends played football next to the legendary leader’s home.

Religious pluralism was perhaps the most foreign concept of all. “For me, there was no other shul all over the world than the shul I prayed in,” he recalled. “It was according to the Orthodox idea. Not extreme Orthodox,” he hastened to add.

Rivlin’s religious experience was so confined and traditional that when he visited the United States for the first time as a Knesset member, in 1988, and attended a Reform synagogue in New Jersey, “I was not only embarrassed. I was shocked. I never knew there was a synagogue like that. To me, it was not a synagogue.”

Rivlin described himself as “secular Orthodox,” a paradox only outside Israel. Orthodoxy is his frame of reference even if he doesn’t follow its rules, and in the past he was quite critical of the more liberal streams of Judaism.

But soon after he was elected president, in 2014, he welcomed Reform leaders to his official residence and subsequently hosted a variety of religious leaders; his chief of staff is an ultra-Orthodox woman; he has made outreach to Arab citizens of Israel, both Muslim and Christian, a cornerstone of his time in office.

This is how, in word and deed, Rivlin appeals to American Jews. His politics on certain issues — specifically the Israeli-Palestinian conflict — do not mesh with the liberal approach in the United States. But his statements on other contentious subjects do.

He was critical of the nation-state legislation passed last year that downgraded the Arabic language. He has delivered punchy warnings about the decline of democracy in Israel, accusing those in power of weakening “the gatekeepers of Israeli democracy” and of undermining the justice system.

He has not been shy about criticizing authoritarian leaders in Europe, such as Hungarian President Viktor Orban and Austrian Chancellor Sebastian Kurz, both of whom condone anti-Semitism, though Netanyahu has embraced them because of their support for Israel. “There is no way that somebody will define himself as one who appreciates Israel and hates Jews,” he told me.

Rivlin is fond of calling the Diaspora “the fifth tribe,” an addition to the “four tribes” — secular, religious Zionist, ultra-Orthodox and Arab — that make up contemporary Israel.

At an event on Christmas Day (an ordinary workday in much of Israel,) Rivlin addressed the graduates of a program called Community, which aims to familiarize Israeli Jews with life in the Diaspora.

In a conversation with the journalist Assaf Lieberman, a graduate of Community, Rivlin said: “Once you meet Jews and say ‘you are not Jews’ you exclude them and you can find yourself excluded. If we were to say to the Jews of the United States, heaven forbid, that they are not part of us, they could say to us, heaven forbid, do not be part of us. We must not get to that situation.”

He is similarly adamant about relations between Jewish and Arab citizens of Israel, citing the egalitarian principles of Israel’s Declaration of Independence, 70 years old and still relevant today. “When we were weak those were our values. This is not the time to change it,” he told me. “Never has Israel been so strong as it is now. Why should we change our values?