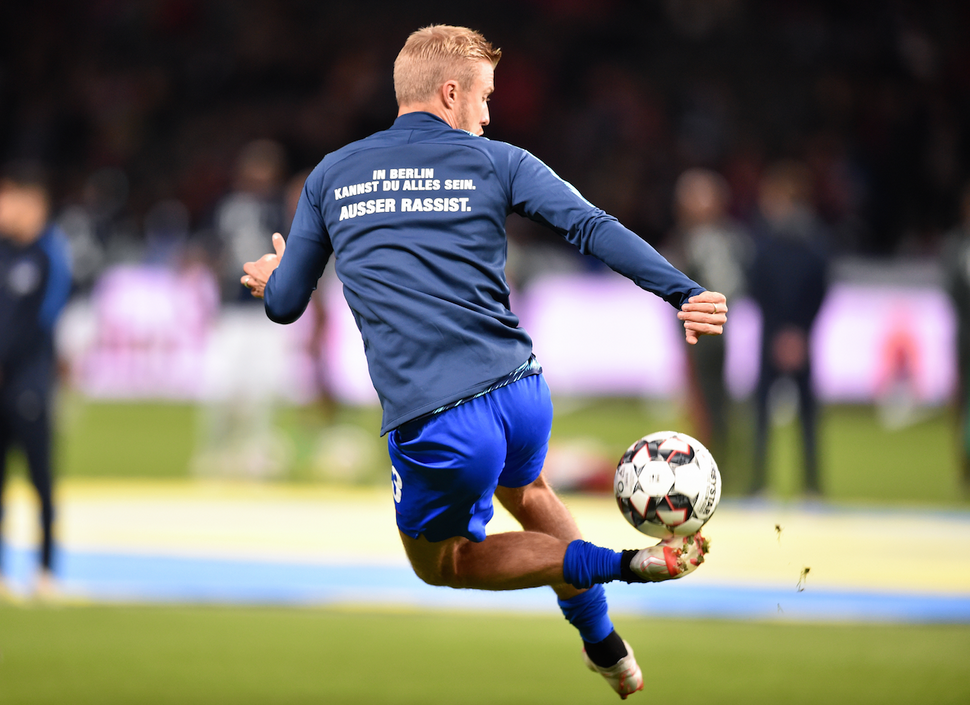 Soccer: the beautiful game. Across Europe, South America and Africa — and increasingly in North America — it’s a global byword for joy. At its best, soccer evokes images of ecstatic fans, their arms wrapped around each other, singing and reveling in the sport’s combination of grace, speed and endurance.

What it’s not usually associated with: genocide. Yet in Germany, soccer clubs are hubs of anti-racism education. And they’re among the country’s most important keepers of Holocaust memory. Germany’s national association even gives a prize, named after a German-Jewish soccer player who died in Auschwitz in 1943, to teams and supporters involved in projects against discrimination.

“Learning From Our Own History” is a project whose purpose was finding out more information about the lives of people associated with the club were excluded from the club due to their Jewish faith. As part of the project, volunteers joined club-organized trips to Auschwitz, as well as to the Sachsenhausen concentration camp, located 35 kilometers away from Berlin. The volunteers’ ages ranged from 16 to 60. All of the volunteers were Hertha Berlin fans. They had little to no experience in historical research.

Memory Of Victims Comes To Life

“We found these people in our archives, but we knew nothing about them,” Stefano Bazzano, a fan representative at Hertha Berlin, told The Forward about the first stages of the project. 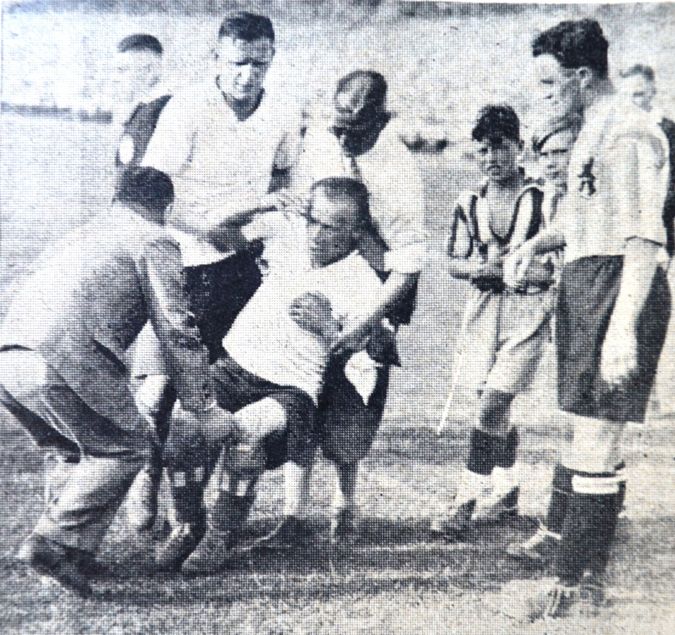 Nine months afterward, and the group managed to collect enough information about him to fill a 60-page publication, sold at the club’s official store, with the proceedings going to various anti-racist purposes.

Having researched Horwitz’s story, the volunteers came across a name that wasn’t previously known to them. They found a membership card under the name of Elijas Kaszke. A second 15-strong research group was then born.

Kaszke was a Polish-born Jew who lived in Berlin and used to go to the club’s games. He was also a Hertha Berlin member. He was married to a Danish woman, and worked as a businessman.

Sabine Dollinger, a Hertha fan that took part in the research into the life of Elijas Kaszke, told The Forward she will never forget the frequent trips to the Sachsenhausen concentration camp for the purpose of the project. “Visiting a camp is horrible every single time,” Dollinger said.

Both men were forced out of the club when the Nazis came to power. Kaszke was deported to the Sachsenhausen concentration camp, where he died in 1940, while Horwitz was murdered in Auschwitz in 1943. 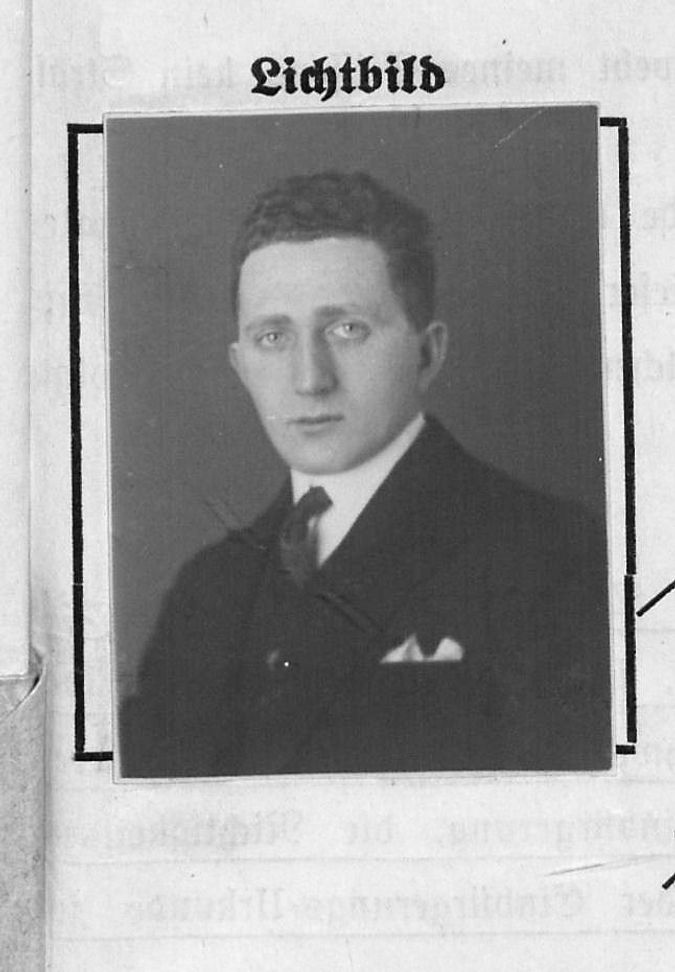 After research in Germany, Denmark and Poland, the group of fans managed to find photos of both men. They discovered a photo of Kaszke in a Berlin archives, and one of Horwitz taking care of a Hertha player during a game in a soccer magazine from 1931.

The club named the participants in the project Hertha Fans of the Year for 2018.

In 2019 Germany, such projects are about more than just history. A survey commissioned by the European Union ahead of this year’s International Holocaust Memorial Day found that 61 percent of Germans said they think anti-Semitic sentiments have grown over the past five years. Several took place in recent months, including attacks against kippah wearers on the streets of several cities in Germany, such as Berlin, Bonn and Offenbach. In another high-profile case, a Jewish teenager had to move schools in Berlin due to anti-Semitic abuse from his fellow pupils.

Germany’s soccer fans, known to be more politically and socially involved than their peers in other countries, are at the forefront of the fight against anti-Semitism and discrimination. Many soccer clubs and fans across the country take part in similar projects to Hertha’s, with many supporter groups encouraging a culture of remembrance of their country’s wrongdoings before and during the Second World War.

Rolf Grande is another Hertha fan that took part in the project.

“With what’s been going on nowadays, the political shift to the right, the populism, it’s essential to be active.”

Sabine Dollinger said she felt the same, and said it was “ very important” for her to contribute to the fight against anti-Semitism and other forms of discrimination.

Soccer is by far the most popular sport in Germany. More than two million people attended games during the 2017/18 season of the Bundesliga, the country’s top soccer division, with millions of others watching at home. The German national team is one of the world’s best, having won the World Cup four times, an achievement only second to Brazil’s five titles. Some of Germany’s top clubs also enjoy worldwide following, with Bayern Munich and Borussia Dortmund being the prime examples.

Due to its popularity, soccer is considered of crucial importance in German society. For the most part, German clubs are owned by their own members, who pay a yearly membership fee that ranges between 40 and 90 euros. The club holds yearly meetings, in which members vote on key issues around the club’s management. The model turns sports clubs into local and regional institutions instead of profit-oriented businesses. 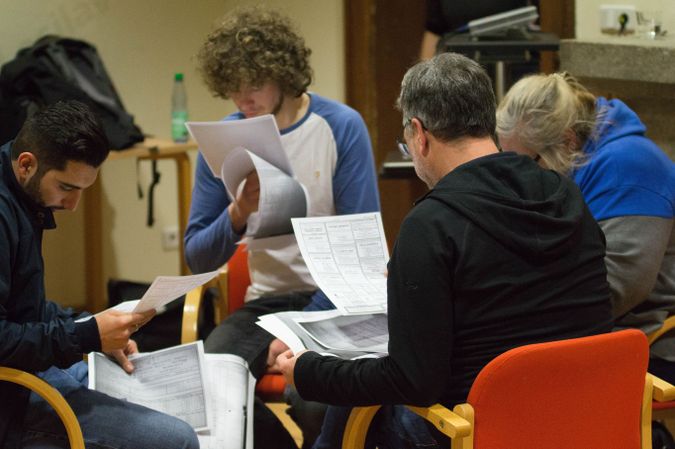 As a result of their special status, soccer clubs and fans in Germany often take a stand on social and political issues. People who go to games are likely to come across anti-discrimination banners and commercials – by both the fans and the club itself – as well as support for a range of local charities and non-profit organizations.

Hertha’s Bazzano says the club supported the project both financially and ideologically. “It’s part of our social responsibility,” he said.

On Holocaust Remembrance Day, many clubs hold events and discussion related to anti-Semitism, Germany’s role during World War Two, and contemporary Germany. The match day that takes place the closest to Holocaust Memorial Day is held under the motto “Never Again,” and includes a wide range of events in commemoration of the Holocaust and its victims.

“Soccer and the fans have a big power in society in Germany,” project participant Jan Müller-Reichenwallner says, adding that such projects serve as constant reminder to people that think anti-Semitism is a historical issue, rather than a current one.

“Never forget, it can happen again. This is the only message that matters.”

Felix Tamsut is an Israeli who works as a freelance sports journalist in Germany.