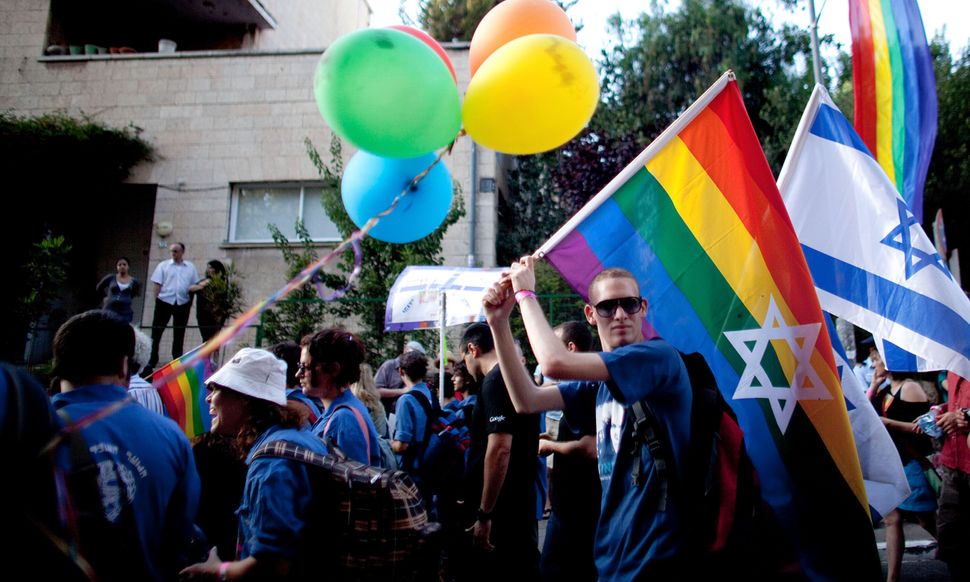 At the opening of this year’s conference, organized by the National LGBTQ Task Force, a group of activists holding Palestinian flags took the stage and led a 13-minute protest for Palestinian liberation and against Zionism. The speakers, who came from a coalition of more than 30 groups called #CancelPinkwashing, were not interrupted or asked to leave by the event organizers.

JTA obtained video of the event, at which speakers led chants of “From the river to the sea, Palestine will be free” and “From Palestine to Mexico, all the walls have got to go.”

The first speaker of the protest, Stephanie Skora, charged that the conference did not include pro-Palestinian programming because it could upset donors. She invoked Rep. Rashida Tlaib, the Michigan Democrat who is the first Palestinian-American woman elected to Congress.

“In a state that elected the first Palestinian woman to the U.S. Congress, there is still a ban on Palestine at Creating Change, because the Task Force is afraid that people are going to come here to seek their full liberation, and donors might get mad,” she said. “Right now, our content is being censored, our liberation is being silenced and our voices are being shut down because the Task Force is too cowardly to have a conversation on one of the leading social justice issues of our time: Palestinian freedom.”

Skora, speaking to JTA after the conference, also complained that that the only Jewish workshop this year was a meeting of the Jewish caucus, and that there was no Muslim caucus meeting. In addition, Skora said that the coalition submitted seven proposals for workshops on Palestinian issues, all of which the Task Force rejected.

A statement from #CancelPinkwashing said that the lack of Jewish and Muslim programming is a “violent erasure [that] reinforces the antisemitism and Islamophobia already deeply rooted in Creating Change.” It called on the Task Force to endorse the movement to boycott Israel. Pinkwashing is a term that connotes what critics see as Israel’s covering up of human rights abuses by trumpeting its LGBTQ-friendly policies.

The second speaker of the protest, Mina Aria, called on the Task Force to fight “pinkwashing, Zionism, Islamophobia and colonial violence.”

The protest this year recalled a similar one at the same conference in 2016, when pro-Palestinian activists tried to disrupt a Shabbat program hosted by A Wider Bridge, a pro-Israel LGBTQ group that also advocates for LGBTQ rights within Israel. The protesters chanted “Hey hey, ho ho, pinkwashing has got to go.”

JTA has called and emailed the National LGBTQ Task Force for comment. On Sunday, the group wrote in a Facebook post that it “firmly condemns anti-Semitism. We firmly condemn Islamophobia. We firmly condemn attacks on each other’s humanity. The perpetuation of white supremacy is harmful to all. There are a number of misunderstandings and misinformation being thrown around.”

Representatives of two organizations, Keshet, a national LGBTQ Jewish group, and Jewish Queer Youth said that public protests on a range of issues are a regular part of Creating Change every year. Mordechai Levovitz, Jewish Queer Youth’s executive director, said that protests in past years have advocated the Black Lives Matter movement and criticized exclusion of transgender people. The Task Force, he said, lets the protests run their course.

“The task force has developed a de-escalation tactic to deal with the protests,” said Levovitz, who has attended Creating Change for nine years. “They come, they always come on stage, they let the protesters speak for about five to ten minutes, they say what they have to say, they get off the stage.”

In a statement, Keshet pushed back against calling this year’s protest anti-Semitic, saying that anti-Israel protest and anti-Semitism are not always the same thing. It called accusations of anti-Semitism this year “inflammatory and divisive.”

Keshet was part of the conference’s Jewish caucus this year. James Cohen, Keshet’s senior director of development and communications, said that the Task Force is not anti-Semitic.

“We appreciate their statement that anti-Semitism has no place in the LGBTQ rights movement,” said Cohen, who was not at the conference. “Both the LGBTQ movement and the Jewish community are wide enough and strong enough to hold diversity of opinion.”

But Tye Gregory, executive director of A Wider Bridge, wants the Task Force to take a stronger stance against a protest that he says targeted a certain group of conference attendees. He said the Task Force’s staff “either don’t have the core competence to fix this problem or don’t care what we have to say.”

Skora also criticized the Anti-Defamation League, saying it has “committed acts of severe violence against the queer and trans liberation movement.” She also claimed that the ADL spied on gay rights groups in the 1980s.

“These accusations are false and absurd,” an ADL spokesperson wrote in an email to JTA. “ADL has a long history of fighting for LGBTQ rights.”