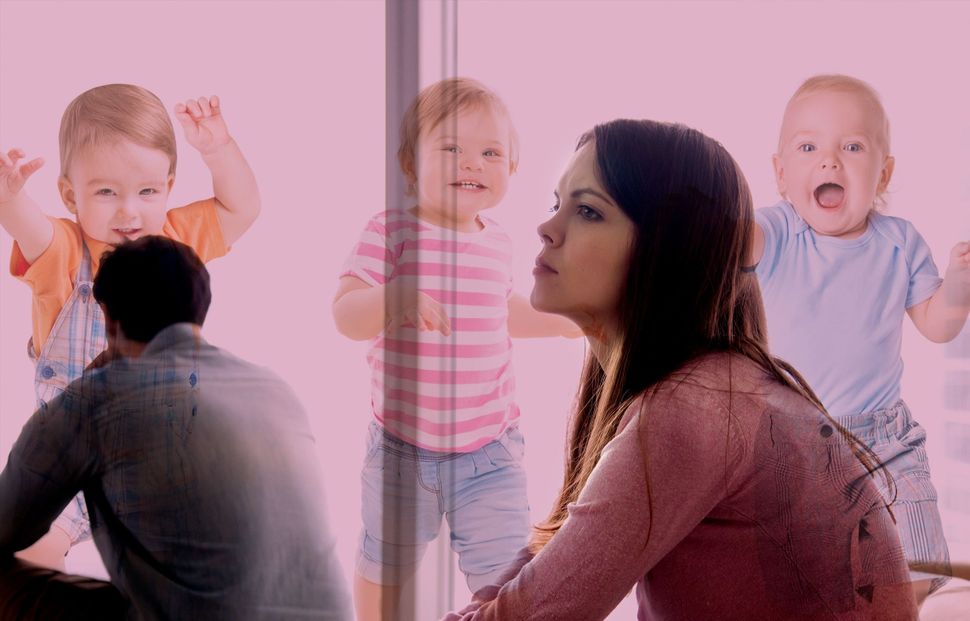 When “Chaim Greenstein” and his wife realized that they could not have a biological baby together because his wife was too old, they decided to try to find an egg donor, in the hope that a younger woman’s eggs, combined in a lab with his sperm, would create an embryo that his wife could carry.

People unable to have a baby the usual way — from gay couples, to couples like the Greensteins struggling with infertility to single parents — have made donor eggs a growth area in the multi-billion-dollar fertility industry. More than 11% of IVF cycles of 2016 used an egg donor, according to the latest statistics.

To meet the demand, there are roughly 90 egg donor agencies around the country. Fertility clinics also offer own in-house donors, from which parents can select a someone based on her looks, height, weight, health, intelligence, profession, education and other qualities — like religion.

Yet what most clinics and agencies do not have are Jewish donors.

“I think it’s really important for Jewish intended parents to have someone who understands and values their culture,” said Michelle Laurie of Donor Concierge, an agency that helps parents find a donors and surrogates from those 90-some donor agencies around the country. “When someone’s looking for an egg donor, they’re trying to find their tribe.”

In the end, the Greensteins didn’t use one of those agencies, but managed to find their donor by scouring egg banks and agency profiles.

“We found a donor who herself was not raised Jewish, but her maternal grandmother is Jewish, so that works for us,” Chaim said, preferring, like many parents who use donors, not to give their real name.

“My family members are Holocaust survivors and I wanted a sense the genes had traveled through a similar story to my own genes,” said Elana.

“As a parent you tell your child how they were conceived, and you want it to be done in a way that feels ethical and like nobody was harmed and nothing was done wrong,” said Elana, 36, who used New York Life Spring to conceive her son four year ago and is now pregnant with her second.

Ruth Tavor and her husband, David Fogle, own New York Life Spring, which has been bringing donors from Israel for 17 years.

When they started the agency, they thought a lot about ethical questions, like how to make sure the donors are cared for, she said.

“We get to know the donors and the recipients – it’s a process,” she says, noting that she meets each and every donor, goes with them to their retrievals and even brings them meals after treatment. “Soup and Jews need food!”

For its 40 cycles a year, New York Life Spring only works with top clinics in New York, New Jersey, San Diego and Oregon that Tavor believes take the best care of the donor and recipients. She accepts one donor out of every 30 who apply, she said.

What Makes A Baby Jewish?

Some couples want a Jewish donor because halacha, or Jewish law, and what it says about the genetics of Jewish identity.

“My husband wanted to make sure there would never be any question baby was Jewish – even though our rabbi told us it does not matter at all,” said “Rania,” a 43-year-old woman from the mid-west who could not get pregnant using her own frozen eggs. To conceive her daughter she used A Jewish Blessing, an egg donor agency focusing on Jewish (not Israeli) donors.

Jewish law on donors eggs is complex and still evolving.

In the past, many Orthodox rabbis preferred people use non-Jewish donor eggs for a number of reasons, including the problems of Jewish genetic diseases and mamzeirut – the bastard status of a man having a baby with the donor, who isn’t his wife.

These days, as more Jewish donors have become available – including in Israel — the Orthodox have changed their stance, and decided that the bastard status doesn’t apply to fertility treatment.

“Everyone would agree that Jewish egg donation is the best option,” said Rabbi Gideon Weitzman, Director of PUAH Institute, the Institute for Fertility and Medicine in accordance with Halacha, or Jewish law. The Conservative Movement believes it is the religion of the birth mother, not the egg donor. “The status of the mother at birth is the defining factor for determining the religious identity of the child,” said Rabbi Elliot Dorff, rector and professor of Jewish theology at the American Jewish University, who is acknowledged within the Conservative community as an expert decisor of Jewish law.

Although it was halachic consideration that initially brought Rania to A Jewish Blessing, what impressed her most was the level of care and attention she got from this concierge service. “There’s a short-hand with Jews,” she said. “It felt like a friend of a friend. Judy provided a level of personalized service that I didn’t think you would get anywhere else.”

Judy Weiss, the founder of A Jewish Blessing, worked for 20 years as a psychiatric nurse before entering the fertility field. “For most of the families it’s [not so much] about halacha – it’s about having a sense of shared identity with the donor to accept this gift of life,” said Weiss, who fell into her business in 2005 after helping a few women find Jewish donors.

A Jewish Blessing focuses on North American donors and does some 30 matches a year, working with any clinic.

“I have so much love and respect for the families I work with – I often wonder where they get their strength from,” Weiss said. “I question if I ever would have had the strength to do what they do.”

How Much Is That Donor in the Window?

At most in-house clinics, the donor egg process runs $28,000-$35,000, which includes the retrieval, fertilization and transfer of embryos, as well as donor compensation. Using a Jewish egg donor agency may cost an extra $10,000 or more above the regular price. The client must pay the agency’s fee, about $7,000, in addition to travel and accommodations for donors. Donors receive about $10,000.

RMA’s Dr. Treiser notes that in general donors may be drawn in by the financial incentive but most drop out when they find out what’s involved: a 4-6 week medical and psychological screening, two weeks of hormone shots and medications and a minor surgical procedure, which comes with risks, like any surgery. “The ones who continue are motivated and understand and want to help someone.”

“I didn’t do it for the money,” a 28-year-old Israeli medical student studying in the United States told The Forward on an anonymous conference call to the offices of The Chosen One a new, New York-based egg donor agency offering Israeli donors to clients around the world.

“The money is going to my medical studies; I want to help people,” says the donor, noting she has been aware of fertility since she was young, because a family friend couldn’t have children, and more recently her own friend had trouble conceiving.

How does she think about the children that may come from her eggs? Would she feel connected to them?

“I don’t think of it that way. Logically, it’s my genetics, but I am not bringing the child into this world.” She notes that she wants to have children one day and perhaps also adopt. For now, though “I am doing a mitzvah and giving it to someone who wants to be a mother. There’s nothing more important that bringing children to this world.”

“We see a lot of people considering Jewish eggs,” said Talia Kastiel-Katz, who founded The Chosen One with her husband Yarin Katz following their own harrowing infertility journey — seven years of trying, IVF, miscarriages, one surrogate carrying the couple’s son. They hope to start a Jewish surrogacy division soon, too.

“We are the chosen people, and if you’re doing an egg donor. You might as well do a Jewish egg.”

“Michal,” a 43-year-old American with Israeli parents, who’d failed IVF with her own eggs, was sad to give up on the idea of her genetics but liked the idea of using an Israeli egg donor. “If it’s not my own egg, at least it’s my people,” she thought. Michal worked with AJB and chose frozen eggs from a Jewish, not Israeli donor – out of state. “I went who I felt I had a connection with,” she said.

She did not get pregnant.

“Maybe the donor’s personality profile didn’t matter so much,” she said, noting she wished she’d chosen a local donor so she could have worked with her own doctor.

She is not going to use her remaining embryos.

“At my age, I don’t need to be pregnant – it’s all nurture anyway,” she said about raising a child.

She and her husband plan to adopt. “It all worked out for the best in the end,” she says.

Correction, February 11, 10:26 a.m.: The original version of this story misspelled the name of the founder of A Jewish Blessing. Her surname is Weiss, not Reiss.

Clarification, February 11, 10:26 a.m.: The original version of this story did not state the name of Ruth Tavor’s husband, David Fogle.

Amy Klein is the author of the upcoming book, The Trying Game: How to Get Pregnant and Get Through Fertility Treatment Without Losing Your Mind (Ballantine, 2020).