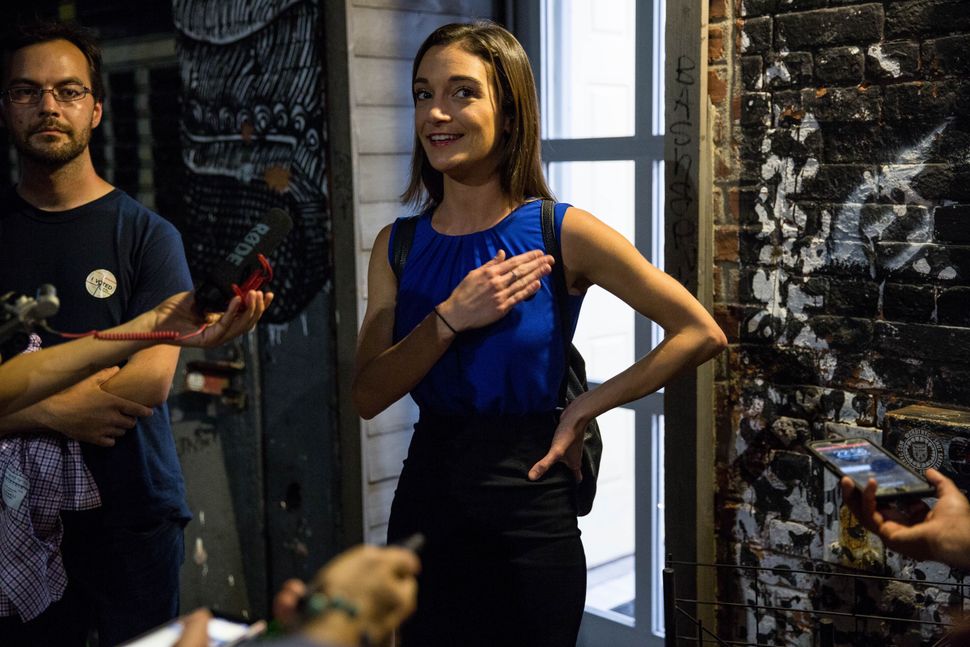 Despite a flurry of negative press over the summer questioning some of her biographical claims, exposing a lawsuit and arrest, and forcibly outing her as a sexual assault survivor, Julia Salazar will now be representing New York’s 18th district in Albany. The 27-year-old first time candidate and socialist handily won a seat in the state Senate by defeating a seasoned incumbent.

Julia Salazar’s acceptance speech: “This is a victory for all of us who believe that a better world is possible, that we’re going to build a New York that works for the many, not just for the few.” pic.twitter.com/40GVSQHrDL

Her September 13 win was hotly debated, especially in Jewish circles, just like her campaign had been. But the Salazar story has never been about Salazar. It’s always been about larger issues. And her win is not just hers, either; it’s a win for a new kind of Jewish voice and a new kind of Jewish identity that Salazar herself embodies.

Significantly, Salazar’s candidacy has revealed that a growing generational divide in the Jewish community when it comes to Israel is expanding to other areas.

For the past three weeks, Salazar’s campaign was hit by a series of articles questioning her on a range of issues. It started on August 20 with an article in Gothamist exposing the fact that Salazar led a pro-life group in college. Next came a Tablet Magazine piece that called into question Salazar’s claim that she was a Sephardic Jew and an immigrant. A City & State piece revealed that the Salazar family had been comfortable, despite Julia’s claim that she had grown up “working class.” And the New York Times revealed that she hadn’t graduated from college.

These were all worthwhile things to point out about someone running for office.

But then the exposés took a turn for the maudlin, veering into territory out of all proportion to the office Salazar was seeking. The subsequent articles, which included tales of lawsuits, an arrest but not indictment, and even a Colombian genealogist, were feeding what had become a deep hunger for dirt on Salazar.

Tips were forthcoming, as were, apparently, clicks. By the end of August, Salazar had become a media punching bag — and readers were eating it up.

Some of the negative attention stemmed from her association with Alexandria Ocasio-Cortez, another young woman of color and socialist, who beat out Joe Crowley after trailing him by over 30 points in a Democratic primary for U.S. House of Representatives in which there is no real Republican opponent.

Both Latina women and members of the Democratic Socialists of America, Salazar became a proxy for Ocasio-Cortez. Those made anxious by the sudden ascendancy of the DSA – it now boasts 50,000 members – were no doubt happy to find an easy target to drag through the mud.

But in Jewish circles, there was also a fair amount of vitriol hurled Salazar’s way.

From the moment the first articles started appearing questioning some of Salazar’s claims, especially to being Jewish and an immigrant, some in the Jewish community cast Salazar as a fabulist, a socialist Trump in the making who lied about her identity to score political points.

But others called the investigation into Salazar’s Jewish roots racist, decrying a new form of Jewish Birtherism. These voices included members of the Jewish Vote, a new political left-leaning group and sister organization to Jews for Racial & Economic Justice that endorsed Salazar. (Full disclosure: I have contributed to JFREJ.)

In line with this, some argued in these pages that the smear campaign against Julia Salazar was proof of what you can expect if you question Israel — your Jewishness will be subsequently questioned. And a group of Salazar’s former classmates spoke up on her behalf, emphasizing how central Jewish life was to her in college.

These trends continued to play out on Twitter last night as Salazar’s win was celebrated, and denounced.

There is a strong generational cast to the Salazar debates, one that reveals that the generational divide about Israel in the Jewish community is spreading.

As poll after poll has pointed out, when it comes to Israel, younger Jews are much more ambivalent than their parents and grandparents, and increasingly supportive of the Palestinian cause.

Very much in line with this, Salazar herself has written pro-Palestinian articles, and is a supporter of the movement to boycott Israel, along with the DSA more generally.

Though she’s not Jewish in the strictest sense of the word — Salazar’s father is of Sephardic origin, and she has made conflicting statements about having converted — Salazar is representative of a young generation of progressive Jews whose politics involve criticizing Israel’s occupation and other progressive causes like healthcare for all and abolishing Immigration and Customs Enforcement.

She is also representative of a new and newly vocal Jewish form of identity. Coming to her defense when her claims to being Jewish were questioned was JFREJ, where Salazar worked, a voice for young Jews of Color and those who support them. Jews of Color are used to having their Jewishness questioned, and the Tablet article triggered a difficult conversation about the pain such questioning causes.

It also triggered a backlash, with more than a few very insisting that you can’t just choose to be Jewish.

In other words, in addition to opposing the occupation and supporting progressive causes domestically, young Jews and Jews of Color are increasingly moving to a model of Jewish identity that involves choice rather than ethnic purity or religious affiliation. And they are rejecting exactly the kind of truth-finding missions that Salazar has been subjected to.

For these Jews, Salazar was the perfect avatar, not despite her murky Jewish origins but because of them.

Despite the avalanche of negative press, Salazar prevailed against real estate darling Martin Dilan. And she didn’t just win; she won big. Salazar took in 58.5% of the vote when all the votes were counted, in a clear victory for the issues over the negative press.

It seems that the voters of New York State Senate’s 18th district don’t mind if their representative hedged a few biographical details.

And as important as the shift in New York politics in the shift in the Jewish community that Salazar — and the conversation about her — portends.