Julia Salazar Is A Cautionary Tale: Question Israel And Your Jewishness Will Be Questioned 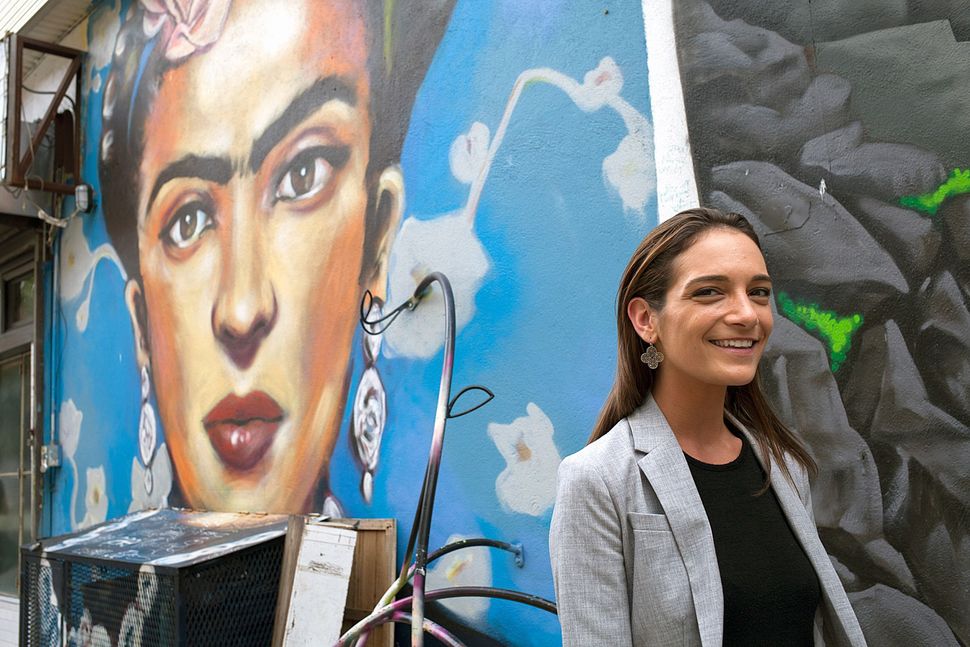 For most of my life, I vacillated between feeling either way too Jewish or not Jewish enough. In my Catholic suburb of Boston, I downplayed my Jewish identity. But in Jewish institutions like Brandeis and Hillel, I felt like an outsider.

One moment in particular sticks out from all the rest. In 2007, I was studying abroad in Italy and I took a trip to Florence with some friends during Sukkot. We were invited to eat in the Sukkah at the local synagogue. I was nervous since I was raised secular, never actually attending services with a congregation. But my friends assured me it would be a welcoming and laid-back event.

“Your mother married outside of the Jewish faith? She tainted your family’s blood! You must find a Jewish husband to fix that.”

I was shocked, and sat there in silence. I couldn’t find the words to express my disbelief and anger. This was a leader in the Jewish community who didn’t think twice about questioning my Jewish identity. Not to mention the irony that as an Italian Jew, I didn’t feel welcome in a synagogue in Florence.

I wish I could say this kind of experience is rare within Jewish institutional life. However, based on my conversations with my peers, particularly Jews of Color, Mizrahi/Sephardi Jews, queer Jews, Jews by Choice, patrilineal Jews, or really anyone else that doesn’t meet a harsh — and inaccurate — Jewish purity test, this experience is painfully common.

Many of us are made to feel that our Jewish identity is conditional. We are only considered authentic Jews if we join a synagogue, keep kosher, and marry a Jew. And even when those criteria are met, many Jews of Color still experience racism and exclusion within the Jewish community.

Case in point: Julia Salazar, a candidate for New York Senate, recently came under fire from an exposé in Tablet Magazine. She purportedly mislead New York voters about aspects of her identity, including the evolution of her political beliefs, her birthplace, and the validity of her Jewish identity.

In response, Salazar has explained at length that she was not raised Jewish, but reconnected with her Jewish identity in college, specifically after her father died.

Whether or not her father had a Catholic funeral or saw himself as Jewish, it is common for Jews, especially in Christian-dominated communities, to leave behind their Jewish identities in order to survive in the dominant culture and maintain safety. And the fact that Salazar “converted” to Judaism via the Columbia-Barnard Hillel should be more than enough proof of Salazar’s Jewishness.

But for the American Jewish community, it’s not. The exposé was met with nothing short of a witch-hunt. And it’s no mystery as to why.

The Tablet article itself explicitly tied Salazar’s evolving views on Israel, from very pro-Israel to supporting BDS, to questions about her Jewishness. It drew a straight line from questioning the occupation to being questioned about Jewishness.

As one of the co-authors tweeted, “I have a timeline of events that demonstrate the timing of the sudden Jewishness coincided with her participation in JVP.”

I think she did. All signs point in that direction. I have a timeline of events that demonstrate the timing of the sudden Jewishness coincided with her participation in JVP and her trip to see Daniel Bannoun.

And that frightens me.

This inquisition shows how easily my own Jewish identity could be questioned under similar pretenses. My father was raised Catholic and identified as atheist, and my mother is Jewish but was not raised religiously. I never went to Sunday school or had a bat mitzvah. I have no family in Israel. And if you asked people I went to high school or college with, who knows what they would say about my Jewish identity.

Our acceptance by Jewish institutions comes with a dangerous trade-off. Jews that have been previously marginalized can be warmly welcomed by established Jewish communal organizations, like Hillel and Birthright, and will be discussed as “Birthright” success stories if they come back with positive feelings for Israel. But this acceptance is less of a gift and more of a bribe. We are welcomed, so long as we don’t publicly question the Israeli government, ignore human rights violations against Palestinians, and agree to write off Israel’s military occupation as “an intractable 100-year-old conflict.”

When we buy into these Jewish authenticity litmus tests, we allow a small group of leaders of the out-of-touch Jewish establishment to define Jewish identity for the rest of us. In doing so, that small group is pushing thousands of Jews like me away, because we are entirely uninterested in a Jewish community that sees us as less-than, and Palestinians as inhuman.

For me and for many other young Jews, being secular and anti-occupation does not make us less Jewish.

If the Jewish establishment is worried about a decrease in Jewish literacy or communal involvement, the answer must be to create an inclusive, justice-driven community, a community that is firmly supportive of freedom and dignity for all people, Palestinians included.

Most recently, Salazar’s Jewishness has been questioned in the context of Birthright. A classmate told Haaretz that “Birthright wasn’t an option since she wasn’t Jewish.”

Looking back on my own Birthright trip, which I joined precisely in order to reconnect with Jewish community, I feel an unshakable discomfort. I didn’t then have the same level of understanding of the occupation, or the role of American Jewish institutions in supporting it, and certainly didn’t receive it from Birthright. Allowing a political organization like Birthright to determine who passes the Jewish litmus test is a recipe for moral disaster.

Despite what Italian rabbis, Birthright, or anybody else says, we who are not observant, who have one Jewish parent or who question Israel are Jewish enough. We can, and will, embrace our identities, and we can, and will, work to transform the Jewish future.

Liana Petruzzi is a founding member of IfNotNow Austin. IfNotNow is a movement led by young Jews to transform the American Jewish community’s support for the occupation into a call for freedom and dignity for all.

Julia Salazar Is A Cautionary Tale: Question Israel And Your Jewishness Will Be Questioned