Young Jews Are Actually Winning The Generational War Over Israel 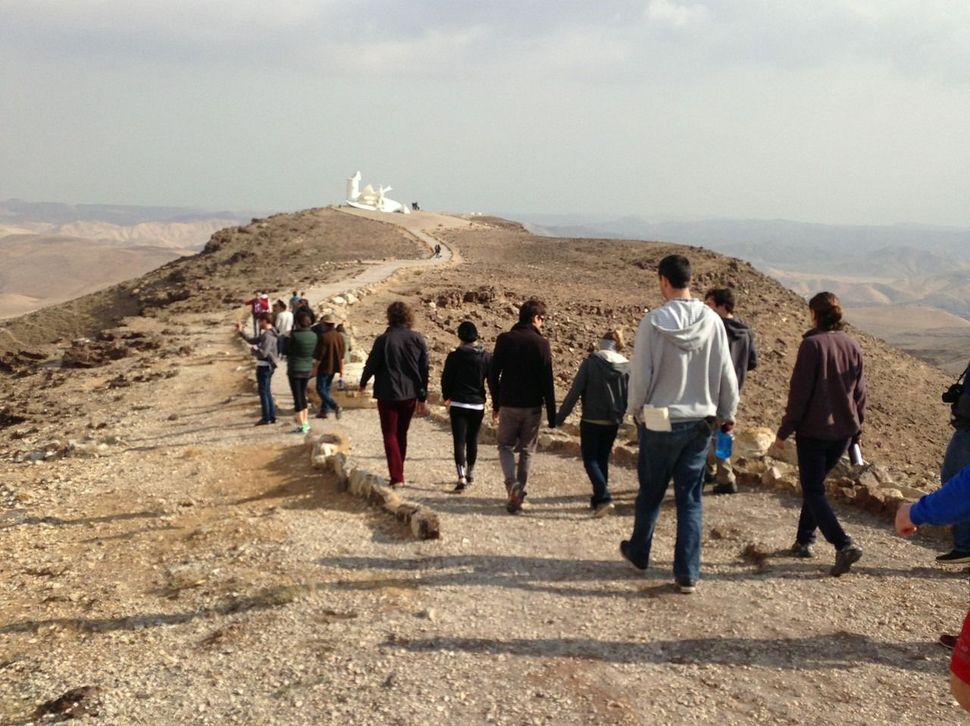 Ever since the late 1960s, Israel has been a defining feature of American Jewish identity. But for the first time in fifty years, this is changing.

Wedge issues have been alienating liberal Jews from Prime Minister Benjamin Netanyahu’s hawkish, pro-Orthodox, pro-settlement platform, issues like prayer accommodations for Reform and Conservative Jews at the Western Wall and the treatment of the Palestinians in the West Bank and Gaza.

Now, a new study joins mounting evidence that young American Jews are abandoning Israel. And unless this trend is somehow reversed, American Jews in their newfound ambivalence towards Israel will lose a key part of who they are, or at least, who they have been for the past half century.

The study, conducted by Steven Cohen and Jack Ukeles, was commissioned by the Jewish Community Federation of San Francisco, the Peninsula, Marin, and Sonoma Counties. In it, over 3,000 respondents from the Bay Area took an online survey in which they were asked questions about Jewish life.

Image by A Portrait of Bay Area Jewish Life and Communities

Now, California is the most liberal state in the union, and the Bay Area is its most liberal area, and Jews are the most liberal of America’s ethnic groups, all of which is to say, the data might not be completely representative of the larger Jewish community. But the findings are compatible with a recent Stanford study, which found that Jewish college students don’t want to engage in debates or conflict around Israel, and resist being labeled as pro-Israel either by Israel advocates or by those critical of Israel.

These results were also consistent with the Pew Research Center’s survey of American Jewish life from 2013, as well as with a Pew study that came out last month, which found a deep political polarization and generational divide among Americans generally on the subject of Israel. A full 79% of Republicans say they sympathize more with Israel than the Palestinians, compared to just 27% of Democrats. And while 56% of Americans 50 and over sympathized more with Israel than with the Palestinians, only 32% of 18-29 year olds did.

Just as it’s dividing Americans, Israel is dividing American Jews. The Bay Area study’s researchers concluded that there are four main predictors for feeling a connection to Israel: age, politics, your level of Jewish engagement more generally, and affluence. “People who are conservative, older, more Jewishly engaged or wealthier feel more attached to Israel than people who are liberal, younger, less Jewishly engaged and less affluent,” Steven Cohen, one of the researchers, told me. “All these factors are interrelated.”

Which brings us to young Jews. “What we’re seeing in comparing younger with older Jews is that younger Jews are moving towards a more neutral position regarding Israel,” explained Cohen.

The reason for this is twofold, says Cohen. The first stems from the fact that American Jews are defining their identity in more personal and less collective terms. “They are more spiritual and less ethnic,” he explained. “And Israel falls in the ethnic compartment.”

The second reason younger Jews are less invested in Israel has to do with Israel itself. “Israeli policies are far more appealing to political conservatives and more alienating to political liberals,” said Cohen. “American Jewry outside Orthodoxy remains overwhelmingly liberal and overwhelmingly associated with the Democratic Party.”

But Jews stand to lose a lot more than non-Jewish Democrats when they lose their ability to proudly identify with Israel. The Israeli policies which appeal to conservatives and alienate liberals are actually costing American Jews a core piece of their identity. When young Jews stop identifying with Israel or caring about it, this reinforces a lack of engagement with their Jewish identity overall. Which means that losing our connection to Israel is catastrophically, existentially dangerous for the Jewish diaspora community.

“Israel’s policies are depriving American Jewry of a major pillar of inspiration and mobility,” Cohen said.

Others are worried, too.

“It’s a huge concern,” said Jason Isaacson, Associate Executive Director for Policy of the American Jewish Committee. It’s why AJC puts an emphasis on contrasting Israel with what Isaacson called Israel’s “more autocratic neighbors” and stresses Israel’s “hunger for peace with the Palestinian people whose leadership has resisted the course of the negotiations.”

But Isaacson admits that it’s a case that’s becoming increasingly difficult to make, thanks to the inherent tension between some of Israel’s actions and the liberal values that matter to American Jews – especially young Jews. “Obviously the actions of the government on matters relating to the Palestinians color this,” Isaacson said.

Then you have the Israeli government’s embrace of the Trump administration, which is hardly popular among liberal youngsters. “All this is part of this mix, so cutting through that and introducing the reality of Israel and the reality of Israel’s situation is a challenge,” Isaacson said.

And it’s not just young Jews. Based on polls the AJC regularly conducts, Isaacson says that the mainstream American Jewish community is “uncomfortable with the occupation.” “It’s not in our nature and it’s not the destiny of the Jewish people to occupy another people,” Isaacson said.

But the days when American Jews will support Israel in spite of illiberal policies are coming to an end. Other data strongly suggests that that when American Jews perceive a tension between Israel and leading an ethical life, they will choose their ethics.

Take, for example, the poll that found that American Jews ranked remembering the Holocaust, leading an ethical and moral life, being intellectually curious, and working for justice and inequality as more important to their Jewish identity than Israel. The same poll found that as important as Israel to being Jewish is having a good sense of humor (Israelis disagreed – strongly). 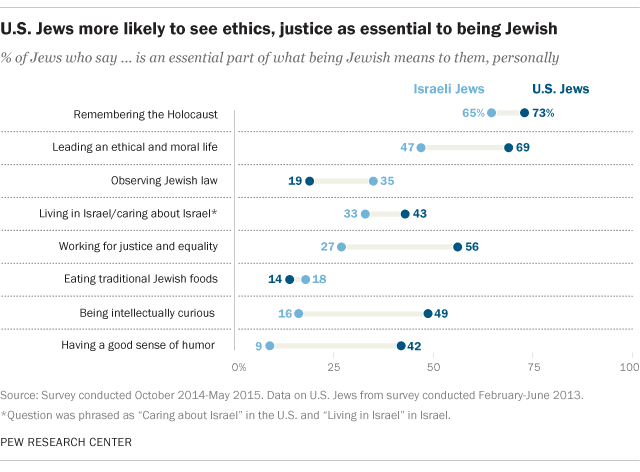 In other words, for huge amounts of Jews, their core beliefs about what is ethical and just — beliefs which preclude the occupation of the Palestinians — are more definitive of who they are as Jews than the nationalism represented by the fact of a Jewish state.

Indeed, nationalism has been tainted by the rise of white supremacists in the US, and its stain is spreading through President Donald Trump to everything he touches – which now includes Israel. And while there is still a minority willing to support Israel on its own terms, the younger generation and the majority of Jews no longer fit into that category.

And yet, we know from the past that American Jews want an Israel they can identify with — fiercely. What’s more, they need it to survive in America as Jews, as Cohen pointed out. Absent the strong ties of community and religion, Israel has provided a source of inspiration that kept Jews connected to each other even in the Diaspora.

Values-driven millennials wont endorse something that doesn’t fit within their belief system. If moneyed American Jews want to strengthen Jewish continuity, they should stop spending money trying to convince American Jews that they aren’t seeing what they say they are seeing when they look at Israel, and start convincing Israeli leaders to pursue policies that American Jews can be proud of.

In fact, this does seem to be happening. Recently, Jonathan Greenblatt of the Anti-Defamation League criticized Netanyahu’s efforts to deport African refugees on the ground that it seems racist. “African refugees, who seem like the Dreamers in the US — young people who by dint of their parents’ decisions have grown up in this country — who speak fluent Hebrew, when you start physically picking them up and sending them over the border back to South Sudan or Rwanda all the while, while you don’t do the same to Ukrainians or Eastern Europeans who overstay their visas, guys, this is not going to end well,” Greenblatt said.

And the AJC’s Isaacson told me he, too, speaks to Israeli officials and leaders about the ways in which they are alienating young Jews. He sees his work as cutting both ways. “It’s hasbara, but it’s not just hasbara,” Isaacson said, referring to Israeli government propaganda presented in a positive light. “It’s action. It’s policies. And obviously these are issues that we discuss intensively and continuously with our friends and brethren in Israel.”

Young American Jews are having an effect on the American Jewish leadership. By refusing to endorse Israel’s shortcomings, they are pushing their leaders to demand change.

It’s a good thing. Our future as Jews – even in the Diaspora – depends on it.

Young Jews Are Actually Winning The Generational War Over Israel