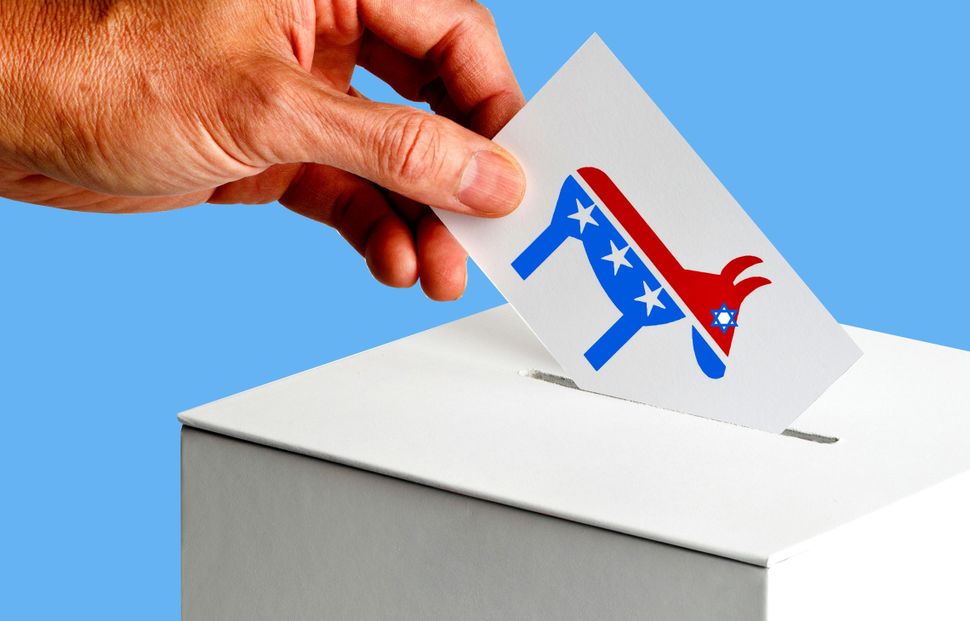 When arguments about Israel became the central issue in a mundane election for low-level California Democratic Party posts last month, things got weird.

There were secret votes, bruised feelings, a cameo by Sen. Bernie Sanders’s campaign co-chair – and a preview of how the shifting Democratic discourse on Israel could make for a difficult year of caucuses and conventions for pro-Israel advocates.

“You have a lot of young people who have a different perspective, grew up in a different time, and are very aware of the injustices [against Palestinians], and they’re coming into the party,” said Marcy Winograd, the secretary of the California Democratic Party’s Progressive Caucus who arranged a putsch against members of a group called “Democrats for Israel.”

Every two years, elected delegates from across California help write language for the state Democratic Party platform and vote on which statewide candidates to endorse. Each of the state’s 80 state assembly districts elects 14 delegates.

This year, many of the candidates are political newcomers, who only got into politics after they were inspired by Sanders’s 2016 campaign.

“Before 2017, you’d have 50 people show up in a [delegate] election,” said Micha Liberman, a former Sanders delegate and a board member of a local grassroots advocacy group called Democrats for Israel. “They were not advertised, no one knew about them. But the progressive movement said, here’s an opportunity for us to make some waves.”

Because so many people can run for so many slots in a given delegate election, pro-Sanders activists had set up a website, ADEMS.vote, that posted lists of progressive candidates they endorsed in each district.

Liberman and two other Democrats for Israel board members were running in District 45, covering the Los Angeles neighborhoods of Encino and Northridge, and were listed as progressive candidates on the ADEMS website.

Winograd, who lives in District 50, says she was part of what she called a “protocol working group” to streamline the website’s endorsement process. She told the Forward that she formally proposed to that group a resolution to delete the three Democrats for Israel candidates from the website. Winograd argued in her motion that DFI, and the Israel lobby in general, contradict the progressive coalition’s “opposition to war, occupation and the military-industrial complex.” The motion passed by one vote.

Another Winograd resolution, promising that ADEMS.vote would not feature Democrats for Israel or others who “advocate for the Israel lobby’s unconditional support for Israel and its human rights abuses” in future election cycles, also passed. The three candidates affected were not informed of the votes until after the fact.

Liberman said that even before the votes occurred, it was unclear who exactly was in charge of the ADEMS website. In any event, he argued, Winograd or her “working group” had no standing to arrange such votes.

Winograd refused to say who else was involved in the vote, saying she didn’t want to contribute to “McCarthyism.” But, she added, “I thought that the website is the face of progressives in California, and I didn’t think it was appropriate for us to be promoting candidates who defended apartheid policies.”

Winograd and DFI already had bad blood – the group had worked against Winograd, who has called for a one-state solution, during her long-shot 2010 primary campaign to unseat Democratic Rep. Jane Harman, then the incumbent. Winograd is one of two candidates Democrats for Israel has ever graded “do not support,” said Andrew Lachman, the president of Democrats for Israel.

Complaints about the vote to remove the DFI leaders from the website were kicked up the chain of prominent progressive activists. Someone with ties to Sanders’ orbit eventually reached out to Nina Turner, the president of the pro-Sanders PAC Our Revolution and now Sanders’s 2020 campaign co-chair, to ask her to adjudicate.

Our Revolution’s director of organizing, Kyle Machado, emailed activists to say he had spoken with Turner about the affair, and that they recommended restoring the candidates to the website. “We would also advise that in future [delegate] elections (2021), we work together far in advance to have protocol to handle situations like this, as it seems like it is almost inevitable,” he wrote.

An Our Revolution spokeswoman said the group does not have a litmus test on Israel or BDS as a basis for endorsement or support.

The three Democrats for Israel board members easily won their elections on January 13. Liberman pointed out that they were almost surely going to win anyway. After all, they were still on the ballot; the secret vote had only been to remove them from the website, and there weren’t many other candidates running to take their spots.

In response to the affair, Democrats for Israel called on voters in District 50 – the most Jewish district in the state, including Beverly Hills and the Pico-Robertson neighborhood of Los Angeles – to vote against Winograd two weeks later. While the other members of Winograd’s progressive slate easily won, Winograd herself came in eighth place, missing the seventh female slot by one vote.

While Democrats for Israel took credit for her loss, Winograd denied it played a role. “My position for equal rights for all in Israel/Palestine is no secret,” she said. “So I can’t imagine that a person would be persuaded by a whisper campaign against me.”

She said she might still go to the convention in June as an observer or workshop leader.

Liberman was born in Israel, but said his primary concern when he was first elected as a delegate in 2017 was economic policy, inspired by Sanders’ rhetoric. “But what I found was that I stepped into this giant wall of anti-Semitism, which I did not expect to find,” he said. “And it was coming a very loud, small group of people.”

Israel-related issues have also popped up elsewhere in the state. Andrea Beth Damsky, the president of the San Diego County Progressive Democratic Club, told the Forward that she was in “kind of in a tenuous position as a Jewish person leading that club.” She said she had been heavily criticized by local activists for going to Israel and the West Bank on a trip arranged by an AIPAC-tied organization.

But Susie Shannon, a vice president of the state party’s Progressive Caucus (of which Winograd is the secretary), said in an email that people who support Israel and a two-state solution are accepted in the movement. “I have always felt welcomed in the Progressive Caucus and was elected as one of its presiding officers,” she pointed out.

Sanders himself opposes BDS and supports a two-state solution. But a wave of Sanders-inspired activist groups – like the Democratic Socialists of America, which has endorsed BDS, and Justice Democrats, whose founder is now Rep. Alexandria Ocasio-Cortez’s chief of staff – are pushing the bounds of the Democratic foreign policy debate farther than Sanders himself may be comfortable with. Those groups, Winograd said, “strengthen the voice of people who really want to see peace and change in Israel/Palestine.”