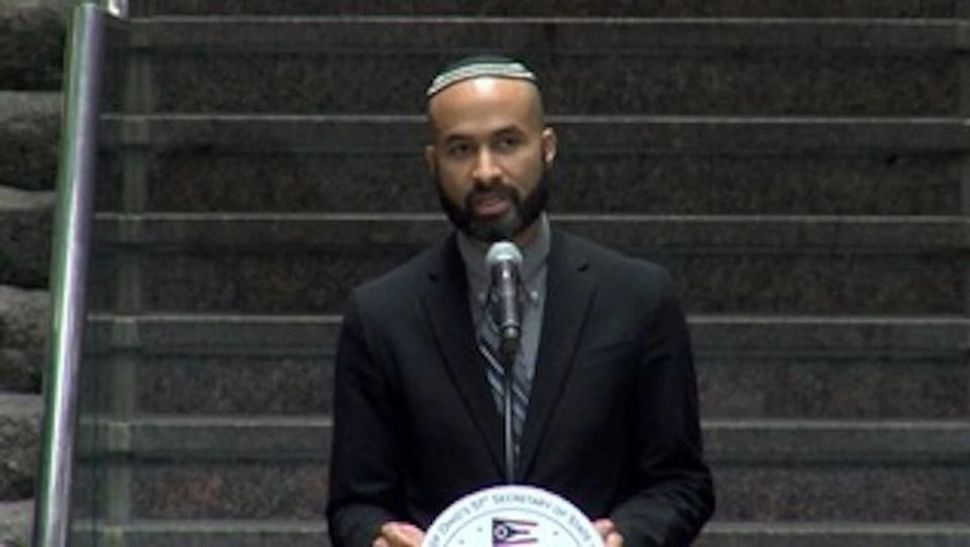 Rabbi Dario Hunter is running for the Green Party nomination for president. Image by Courtsey of Dario Hunter

A rabbi in Youngstown, Ohio who is running for the Green Party’s presidential nomination was fired Wednesday under disputed circumstances.

Rabbi Dario Hunter said he was dismissed because of comments he made to the news site Cleveland.com in an article about his presidential run, in which he said the U.S. should stop providing aid to Israel because of its “horribly atrocious” actions against Palestinians.

“I can’t say that this morning’s news was unexpected, although the process of getting to this point was very painful,” Hunter told the Forward.

Hunter’s congregation, Ohev Tzedek-Shaarei Torah, did not respond to a request for comment. But synagogue co-president Neil Yutkin told Cleveland.com that there were concerns Hunter’s political run would take him away from the congregation too much.

Hunter, who only worked part-time for the synagogue, doesn’t buy that story. He said that at the board meeting that led to his termination, copies of the offending article were already present.

“I was asked to defend how any rabbi could make such a statement…with the presumption, of course, that that it would not be an acceptable statement for any rabbi to make,” he recounted. He said he’d never made statements critical of Israel form the pulpit.

Hunter, 35, has a unique backstory – a black, gay, first-generation American who converted to Judaism and then became a rabbi. He still works as the Coordinator for Jewish Life and Intersectional Programming at the College of Wooster, and serves on the Youngstown School Board and as a volunteer chaplain at the Ohio State Penitentiary. He also says he recently became a member of Jewish Voice for Peace, as a result of being more active in the Green Party.

“I have always been on the progressive side of issues, and that’s what makes a comfortable home for me in the Green Party,” he said. “A lot of members of my party have very strong opinions about human rights issues and abuses in Israel/Palestine. I’ve found a political space to examine my own positions and examine my own heart on those issues.”

The son of an African-American Christian mother and a Iranian Muslim father, Hunter underwent a Reform conversion to Judaism as a young man and then another Orthodox conversion. For a time, he said, he lived in an ultra-Orthodox community in Detroit, where he wore only black-and-white with a fedora and tzitzit. He said that he eventually came to question his level of religiosity, but was pushed out when his rabbi asked him if he was gay, and threatened to undo his conversion.

“It was an ugly feeling,” he said. “That feeling is also what motivates what I do as an individual. The work I do in the community is to make sure no one feels that small, no matter who and what they are.”

Hunter also worked for a time as an environmental lawyer in Israel, where he said he experienced “virulent racism.” The negative treatment he received there as a Jew of color affected his views on the country and how it treats the Palestinians and other minorities there.

After moving to Youngstown, he became a member of Ohev Tzedek, then eventually became its rabbi after undergoing a distance-learning ordination with a nondenominational seminary.

Although Hunter said Judaism and Jewish values are a major part of his identity, he said that as a staunch believer in the separation of church and state, those aspects would not affect his decision-making as president.

“In regards to the things I support in bringing about the fundamental fairness for all, there’s no time that I’m going to say, ’how does this measure up to Jewish law?’” he said.

Hunter’s platform calls for Medicare for all, cutting military spending, transitioning to 100% renewable energy and fighting against what he described as “excesses of hyper-capitalism that have caused fundamental unfairness in this country.” And he won’t take any corporate contributions.

When asked if he thought he could win, he said “absolutely.”

“You should choose someone to represent you who best represents your values,” he said. “You shouldn’t be forced to fit yourself to one of these two holes, because those are the only two options you’re allowed.”