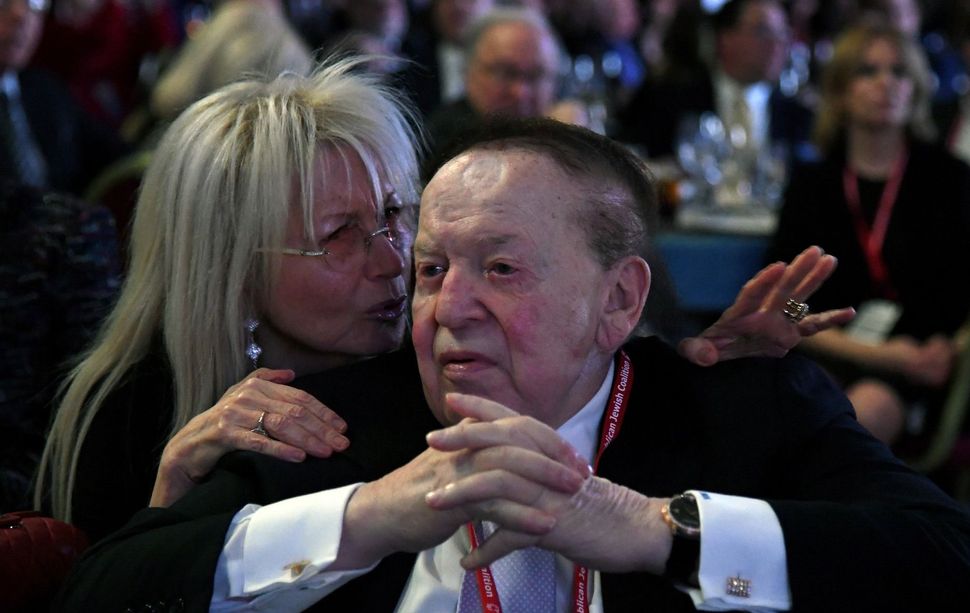 The casino billionaire Sheldon Adelson has been the dominant figure in Jewish philanthropy for over a decade, giving hundreds of millions of dollars to Jewish charities, boosting Jewish groups that share his politics, and, more than any other donor, shaping the community according to his values and vision.

Now, the news that Adelson is ill with cancer is raising questions about the future of his charitable giving.

Though today far better known for his political donations, Adelson is without parallel among Jewish philanthropic mega-donors. He has given more than $410 million to Birthright Israel alone, a mind-bending fortune that by itself is more than most other mega-donors give away in their lifetimes.

Some of Adelson’s giving goes to nonpartisan groups, like the Jewish day school named for him in Las Vegas. Other funds bolster a network of right-leaning Jewish groups, including the Zionist Organization of America and the Israeli-American Council, that help shape the Jewish communal discourse.

“He’s really sort of a breakthrough Jewish philanthropist,” said Mark I. Rosen, an associate professor in the Hornstein Jewish Professional Leadership Program at Brandeis University. “He’s in a league of his own.”

Adelson, who is 85, has long used a motorized wheelchair for mobility. Now, Adelson’s own attorney says that he is in “dire” health. In late February, Adelson’s casino firm, the Las Vegas Sands Corporation, confirmed that Adelson was being treated for non-Hodgkin’s lymphoma.

Yet any major change in the Adelson philanthropic portfolio seems unlikely. Mort Klein, the president of the Zionist Organization of America and a personal friend of the Adelsons, said that if Sheldon Adelson were to, for whatever reason, no longer be involved in charitable work, Adelson’s wife Miriam would pick up where he left off.

“Sheldon said to me, ‘Eighty-five is still middle aged… When I’m 95, I’ll consider myself being old age,’” Klein said. “When he reaches old age in his mid-90s and he may not be as active as he was in his mid-80s, I believe his wife… who agrees with him on virtually everything politically – even now she is a major factor in the decisions they make philanthropically — I think she will continue his work.”

Klein said that Miriam and Sheldon Adelson are “partners” in their philanthropic work. Miriam, an Israeli-born doctor, married Sheldon Adelson in 1991. In 2018, President Trump awarded Miriam Adelson, 73, with a Presidential Medal of Freedom, the highest civilian honor in the U.S.

The current status of Sheldon Adelson’s health is not entirely clear. In a statement, the company said that Adelson continued to carry out his duties as chairman and CEO of the Sands Corporation, but that side effects of his medication had “restricted his availability to travel or keep regular office hours.” As of early March, Adelson had not been at the Sands Corporation offices since Christmas, according to the Associated Press.

The claim by Adelson’s attorney that his client’s health was “dire” came during a court hearing over whether Adelson should be required to sit for a deposition in an ongoing civil lawsuit.

Unlike some other family foundations, the Adelson Family Foundation has no substantial endowment; rather, it makes grants out of funds that the Adelsons donate to it each year. The foundation declined to comment for this story.

Klein, whose organization is a major recipient of Adelson’s donations, said that he’s had dinner with the Adelsons at their home more than twenty times. “They are as wonderful a team and partnership as I’ve ever seen in a marriage,” Klein said. “They make decisions together about the philanthropy, whether political or Israel.”

Some observers suggested that a moment of transition in the Adelson family could be an opportunity for introspection among Jewish leaders about the outsize role Adelson has played in recent years.

“It could be an occasion where various Jewish leaders take a long view of the future, and a long view into the past, and think about whether it has been healthy to have been so wholly reliant on an individual donor,” said Lila Corwin Berman, a professor of history at Temple University, and an expert in American Jewish history. “It might be a healthy moment for that kind of evaluation.”