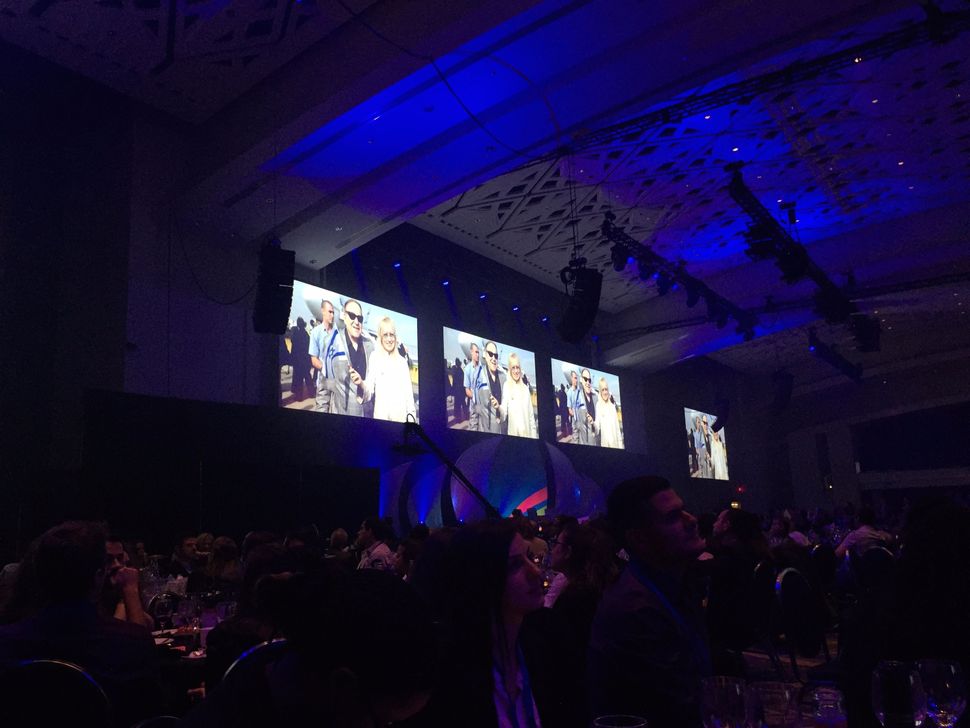 Pictures of Sheldon Adelson projected on a screen at the Israeli-American Council’s convention in Washington, D.C. Image by Josh Nathan-Kazis

In blunt remarks Sunday night, Sheldon Adelson erased any doubt about his intentions for the Israeli-American Council, the nationwide group into which he has pumped more than $10 million over the past three years: He’s building a harder-line alternative to AIPAC.

Addressing the crowd after dinner at the IAC’s annual convention in Washington, D.C., Adelson for the first time publicly described IAC as an uncompromising alternative to AIPAC, the leading pro-Israel lobby group.

“It reminds me of the days when AIPAC started to grow,” Adelson said of the convention, held at the same venue where AIPAC holds its own annual gatherings. “But this group, the IAC, won’t even question whether or not we should support Israel.”

The IAC has gone to great pains, throughout its explosive Adelson-funded growth in recent years, to represent itself as an apolitical community group for Israelis living in America. But on the third and final evening of its fourth annual conference, Adelson said that when he began supporting the IAC in 2013, he was attracted to the group’s potential as a hardline advocacy group.

“There are times when we cannot have equivocation, when we need a group of people to advocate for Israel unequivocally, and I felt if there was an organization called the Israeli-American Council, that council and that organization would unequivocally always without question and irreversibly support Israel when it needed it,” Adelson said.

Once a major AIPAC donor, Adelson broke with the group in 2008 over its support for aid to the Palestinian Authority. His adoption of the IAC in 2013, infusing more than $10 million into its coffers, and his transformation of the group into a national organization with its own advocacy arm, has led to speculation that he hoped to build his his own AIPAC rival.

Yet while IAC has not hidden its advocacy aims, it has sought to present itself mainly as a community group for Israelis living in America. The organization runs programs for high school and college students as well as leadership training programs for adults. Panels at the conference, which runs from Friday through Sunday, deal with Israeli-American identity, Israel-diaspora relations, and the role of the Hebrew language, in addition to pro-Israel advocacy topics.

IAC is still far smaller than AIPAC. Its budget of $15 million is just over a tenth of AIPAC’s size. But it has grown quickly in recent years, swallowing smaller local Israeli-American groups and spinning off an advocacy arm. It now has sixteen regional offices around the United States and claims to touch 250,000 Israeli-Americans with its programs.

Adelson spoke at 9:30 P.M., alongside his wife, Miriam Adelson, who was born in Israel. The two received a lengthy standing ovation from the crowd, and were feted with a loud video celebrating their work. Every other speaker thanked the Adelsons, including Israeli prime minister Benjamin Netanyahu, who sent a video message.

Describing his first visit to an IAC event before he started funding the group, Adelson said he was impressed at how many Israeli-Americans the group had gathered.

“It occurred to me that there are other Jewish organizations that are looking to represent American Jews and to foster the American-Israeli relationship,” Adelson said. “But there’s one word that came into my mind. And I’ll tell you now, that word is equivocal. There is equivocation in other organizations for various reasons. But when it comes to Israeli-American, there is no equivocations.”

Miriam Adelson said that she saw American Jews as soldiers for Israel. “American Jewry, and now the IAC, will be our soldiers if, God forbid, something is endangering the state of Israel,” she said. “You will fight for Israel.”