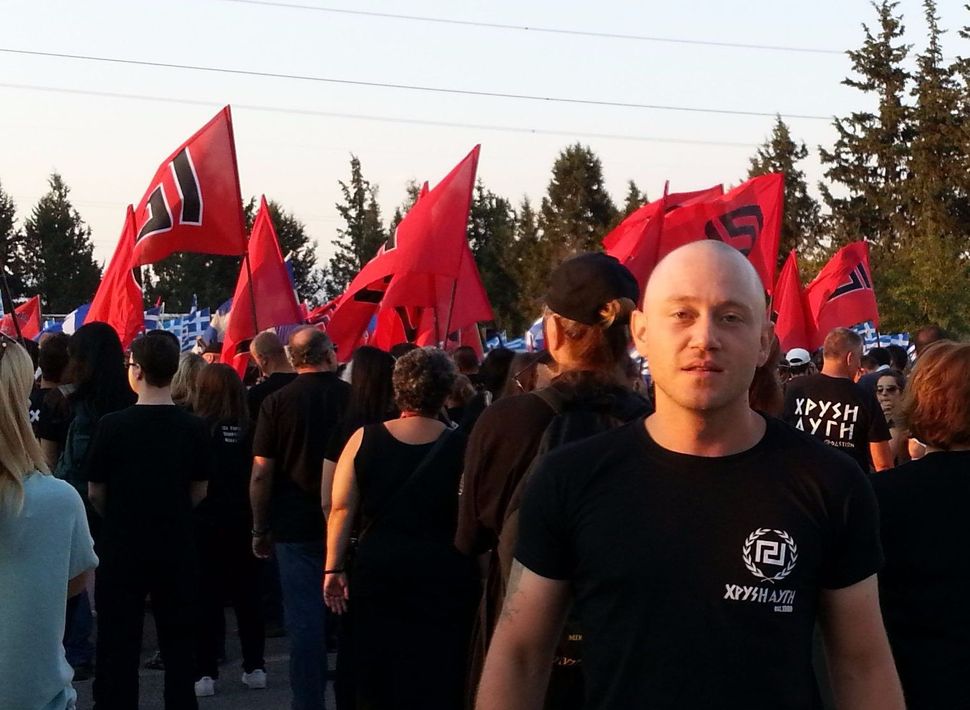 The reclusive neo-Nazi blogger Andrew Anglin was banned from Twitter in 2015, but that hasn’t kept him off the site.

Anglin is still operating anonymously on the social media platform through at least one fake account he uses to promote content from The Daily Stormer, the anti-Semitic hate site he founded in 2013, according to a source with direct knowledge of Anglin’s presence on Twitter who asked to remain anonymous because of the sensitive nature of the matter.

The account, whose handle has not been publicly identified until now, is @Rumples42296282, goes by the name “Ludovici” and often links to Daily Stormer content. It has been registered since December 2018. Presumably, the account is named after the obscure British fascist Anthony Ludovici, who died in 1971. He is a figure Anglin would likely admire, according to Lawrence Rosenthal, chairman of the Berkeley Center for Right-Wing Studies. The Daily Stormer, Rosenthal said, is “uncompromisingly facsist.”

The Twitter account claims in its biography that it is operating from Rostov-on-Don, a city in southern Russia. But it is unclear if that is the account’s actual location — Anglin once lived in Russia but his whereabouts are currently unknown — as any user can invent a location in his or her own Twitter profile.

The source confirmed that Anglin had identified himself as the operator of the Ludovici account, adding that Anglin likely controls more than one anonymous account on Twitter. In the past, Anglin, who is in his mid-30s, has claimed to have created thousands of fake Twitter accounts.

The Forward emailed a Yandex account, listed on The Daily Stormer’s website, inquiring about the Ludovici account and received a response from a person claiming to be Anglin and denying that the account was his. The person also claimed to have emailed HuffPost twice asking for a retraction of its story. In a statement, a HuffPost spokesperson said, “We are aware of one instance that Anglin did reach out,” adding, “We stand by our reporting and the accuracy of this piece.”

It was unclear if the message was actually sent by Anglin, and the person did not respond to several follow-up emails.

Anglin’s Daily Stormer posts, which are laced with racist, misogynist and anti-Semitic invective, are often linked to on the social media platform.

He isn’t the only white nationalist lurking anonymously on the site. More than 1,000 anonymous Twitter accounts are believed to be run by white supremacists who have snuck back onto the platform.

Until recently, The Daily Stormer was one of the most popular venues for anti-Semitic hate on the internet. But Anglin has more recently struggled to keep his site afloat. He has been in hiding as he seeks to evade a series of major lawsuits that threaten to bankrupt his entire operation.

He has already lost one. In mid-June, an Ohio judge ordered that Anglin would have to pay $4.1 million in a defamation suit filed by the Muslim comedian Dean Obeidallah, whom Anglin had falsely accused of orchestrating a terrorist attack at a concert in England.

A Montana resident named Tanya Gersh has, with the help of the Southern Poverty Law Center, also filed suit against Anglin for having orchestrated an anti-Semitic “troll storm” that targeted her and her family. In yet another lawsuit, Taylor Dumpson, the first black woman elected student government president at American University, is seeking $1.5 million in damages from Anglin for online harassment.

In 2017, several web servers stopped hosting Anglin’s content after he helped organize the violent white nationalist riot in Charlottesville known as the Unite the Right rally. But the rally did no such thing, opening a fissure in the so-called alt-right that still hasn’t closed, said Marilyn Mayo, a senior research fellow for the Anti-Defamation League’s Center on Extremism.

According to Mayo, many alt-right figures are resentful of Anglin for, among other things, having injected an overt and vicious kind of anti-Semitism into the far-right playbook, making the alt-right easier to caricature and turning away “disaffected whites” who might be put off by such extremism. “They say he Nazi-fied the movement,” Mayo explained.

In spite of this, Anglin still appears to have supporters. According to a recent HuffPost investigation, he receives a steady stream of Bitcoin donations, which he solicits on his website.

Anglin, who is from Ohio, now operates The Daily Stormer from a .name domain, and he publishes several posts a day, though it is unclear if he is the author of all the content that is published under his byline. Anglin has kept a low profile since the Unite the Right rally, despite that he continues to publish regularly on his website.

If anything, Anglin’s anonymous presence on Twitter is an indication of how difficult it has become for the neo-Nazi, who once commanded a sizeable audience of white nationalist trolls, to spread his message of hate.