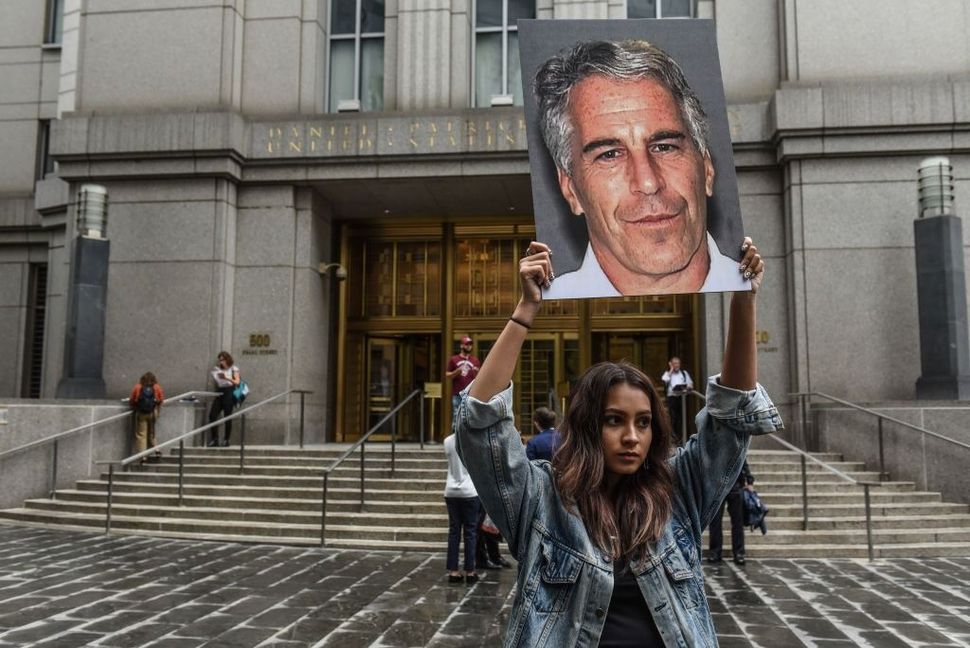 NEW YORK, NY – JULY 08: A protest group called “Hot Mess” hold up signs of Jeffrey Epstein in front of the federal courthouse on July 8, 2019 in New York City. According to reports, Epstein will be charged with one count of sex trafficking of minors and one count of conspiracy to engage in sex trafficking of minors. (Photo by Stephanie Keith/Getty Images) Image by Getty Images

In 2008, Jeffrey Epstein, a financier and philanthropist, pleaded guilty to soliciting prostitution from a minor and registered as a sex offender.

In 2019, Epstein was accused of new sex trafficking charges.

That charity, UJA-Federation of New York, is among more than 20 Jewish not-for-profits that have had to figure out whether they have any ethical or legal obligation to speak out about the donations Epstein gave them – including, in a few cases, after his guilty plea.

Experts say it would be better for everyone if the charities opened up. Also, there isn’t much more that they can do, even if they wanted to.

“Acknowledgement is always the first gesture that must be made,” said Thane Rosenbaum, a member of the Committee on Ethics in Jewish Leadership and a distinguished fellow at New York University School of Law. “That doesn’t necessarily mean that any funds need to be returned…but it does demand some level of soul-searching.”

Often, legal guidelines prevent charities from returning gifts, said Benjamin Soskis, a research associate at the Urban Institute’s Center on Nonprofits and Philanthropy. (Disclosure: Soskis freelanced for the Forward in the mid-2000s.)

It has been done: In 2015, Spelman College ended a scholarship fund endowed by Bill Cosby and returned the money to his wife’s foundation.

And the National Council of Jewish Women would give any Epstein funds to anti-trafficking work, the organization’s CEO said in a statement to the Forward.

The tax filings from one of Epstein’s charities stated that he gave three separate $5,000 donations to the NCJW between 2005-2008 (the last one several months before his guilty plea.) But NCJW CEO Sheila Katz said they couldn’t find any documentation of such gifts. Indeed, several charities told NBC News last month that they did not receive contributions that Epstein claimed to have given.

“Jeffrey Epstein is a convicted sex offender whose sexual abuse and trafficking of underage girls is abhorrent,” Katz said in the statement.

Rabbi Elliot Dorff of the centrist Conservative movement said that organizations that accepted donations after Epstein pled guilty should only have done so if they could be sure that it was part of his process of teshuva, or repentance. Then again, it’s hard to know what’s in someone’s heart, and the law also requires that people be given the benefit of the doubt.

“The Mishna is very clear on this: You have to presume the best in people,” Dorff said, referring to an early collection of Jewish commentaries on the Bible. “Who knows what their intentions are – it’s not even clear that they know their [own] intentions.”

Another reason to keep the money: returning it could be counterproductive, Rosenbaum said. “The funds might have been tainted at its origin and given for all the wrong reasons. It still does not defeat or override the good deeds that come of it.”

Dorff, the rector of American Jewish University, wrote a religious ruling in 2009 that absolves Jewish charities from having to return donations from someone who went on to be convicted of a crime, because doing so would cause undue embarrassment to someone already experiencing a great deal of shame.

Given the legal and ethical problems involved in returning a donation, what else can charities do in such a situation?

“There’s no science to this,” Soskis said. “It’s a complicated moral calculus with a bunch of mitigating factors.”

Even just talking about it could help, said Rosenbaum, although they might be deterred by the possibility that acknowledging their Epstein ties could draw more negative attention, Soskis said.

UJA’s PR employees have refused to respond to – or even acknowledge receipt of – seven phone calls, four emails and two tweets asking questions about the donation Epstein gave them in 2017. Nor do they appear to have made any public statement about the matter.

Harvard University took millions of dollars from Epstein over the years; a Harvard spokesperson told the Forward that the school does not comment on individual donations or their status.

“There’s certainly no legal obligation, but I think there’s a strong moral and ethical obligation to acknowledge that some of the funding received came from someone who has been alleged to have committed very heinous crimes,” Rosenbaum said. “In situations like that, Jewish organizations should at least acknowledge to the public that they were received.”

Some have done so.

The YIVO Institute from Jewish Research, one of two American Jewish charities known to have taken an Epstein donation after his guilty plea, came out with a statement in response to the Forward’s inquiry, saying they received the gift in March 2011 to support its 2010 gala dinner. “All of the funds collected as part of the Gala, including the Epstein gift, were used to advance YIVO’s mission to ensure the legacy of Eastern European and Russian Jews through its library, archival collections, scholarship and public programs,” the organization said in a statement.

Ohio State University is speaking out. It accepted more than $2.5 million from Epstein over the years, released a statement disclosing their donations from him and announcing they would review his giving history and “take additional action as appropriate.”

“That level of transparency is really sound,” Joan Harrington, director of social sector ethics at the Markkula Center for Applied Ethics at Santa Clara University, told the Miami Herald last month. “Not only that, it’s logical — one day someone is going to find out that he’d given in the 1990s. The honorable thing would be to look at it and tell people about the process and decision making.”

Soskis said he expects such conversations about Epstein and the power of other major donors with shady pasts to continue, especially in the Jewish community – since, as he said, “Jewish organizations that rely increasingly on large givers are particularly reluctant to call out major donors.”

“This is not a new question,” he added. “This is one the Talmud addresses, that rabbinic literature addresses. I think a related question is, do Jewish organizations have a particular obligation to be informed not just by the regulations governing charitable gifts in the U.S., but by a particular kind of Jewish ethics?”

Correction: A previous version of this story referred to Sheila Katz as the president of the National Council of Jewish Women. In fact, she is the organization’s CEO.