Rabbi Rachel Cowan, the mother of the “Jewish healing” movement, was hailed throughout the Jewish world for giving new life to the ancient practice of visiting a sickly person to pray over them.

And in the moment she needed such prayer most desperately, it came in force — via the internet.

Last year, Cowan’s friends and disciples held a digital vigil for her while she underwent surgery for brain cancer. People from all over the world filled a video conference to its 100-person maximum, praying and reciting psalms. After Cowan passed away this year, people again gathered via video conference to recite the Mourner’s Kaddish, the prayer for the dead.

“You could feel the love radiating from the screen,” said Rabbi Lisa Goldstein, executive director for the Institute for Jewish Spirituality, which hosted the vigil.

Judaism is becoming a cyborg religion. Online synagogues, seminaries, schools and meditation groups are extending Jewish ritual and wisdom to people who cannot afford the costs of in-person observance, or live far from a community that appeals to them. Early adopters of digital spirituality say that brick-and-mortar communities should look to these new endeavors for inspiration, instead of seeing them as a threat — because, they say, there is often no substitute for the warmth and support of a tangible community.

“The technology is a tool,” says Goldstein. “But ultimately, we need each other” — in the flesh.

Digital Jewish life has existed since the internet was limited to half a million computers in a handful of countries. Chabad, the Hasidic movement, began engaging Jews around the world in online discussions about faith and observance in 1988, when emails sometimes took days to travel from continent to continent. Today, many Orthodox Jews align their Jewish text study with Daf Yomi, a website that offers a particular page of Talmud to study each day.

But Chabad, like other Orthodox groups, does not endorse praying online.

“You cannot phone in your soul,” Jeffrey Shandler, the author of “Jews, God, and Videotape: Religion and Media in America,” summed up as their view.

That leaves new ventures in digital Jewish spirituality to market themselves primarily towards liberal and secular Jews, or religious “nones” of Jewish descent — about a fifth of U.S. Jews — who have little to no familiarity with physical synagogues.

It’s hard to quantify the number of people who are being served by these ventures, says Aliza Mazor, the chief field-building officer at Upstart, the Jewish incubator and innovation hub. But anecdotal evidence suggests that interest is growing.

Rabbi Patrick Beaulier founded one of the precursor’s to today’s digital Jewish movement in 2009: Punk Torah, a now-defunct blog about his journey into Jewish living. The blog begat OneShul, a lay-led online synagogue, as well as Darshan Yeshiva, an online learning center and multi-denominational conversion provider. This year, Punk Torah created the Pluralistic Rabbinic Seminary, an online rabbinical school. 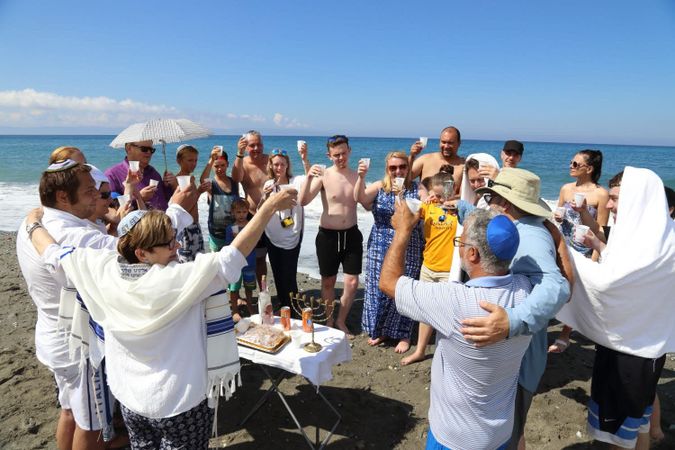 Many Jewish leaders “don’t understand that people are willing to participate in Jewish life if you use the internet correctly, and in fact will be very happy to,” Beaulier says.

To wit: Lots of synagogues now stream their weekly and holiday prayer services. Parents livestream brises and baby namings on Facebook. On Instagram, there are 9,000 followers of Modern Ritual, which offers daily mini-tutorials on Jewish observance and history, one tastefully filtered image at a time. This spring, the Jewish wellness brand At The Well saw over 1,200 people sign up to receive a text message for every day of the Omer, the seven-week period between the holidays of Passover and Shavuot that Jews traditionally count in daily prayers, according to Sarah Wexman, At The Well’s founder.

“I’m not coming out and saying technology for everything,” says Mazor. But, she added, “What these are all creating is access, and customization. It enables people to find more of exactly what they need.”

‘Connected community from the comfort of your couch’

It’s even possible to find full-fledged synagogues solely in cyberspace.

SecularSynagogue.com is meant to substitute as much for our endless social media feeds as it is for a brick-and-mortar synagogue. On its website and private Facebook group members discuss topics of faith and politics, social justice planning, learning, and occasionally ritual observance. Its tagline is “Connected community from the comfort of your couch for Jews online.”

“Instead of what’s on Netflix tonight, I would actually have something meaningful to do after my kids went to bed,” said its founder, Rabbi Denise Handlarski, who also leads a secular humanist congregation in Toronto.

Bernard Farkin, a SecularSynagogue.com member who lives in a sleepy suburb of Glasgow, in Scotland, says that the model might not work for people who derive spiritual connection from lively communal prayer, but it works for him.

“Spirituality for me is more of the Einstein-type spirituality, which is not really communicating with the divine, but expressing wonder, or gratitude,” he says — something he can do in the comments of a Facebook post, for example.

There are other internet congregations: the multi-denominational OneShul, which streams weekly prayer services, and Sim Shalom, an online Jewish universalist synagogue.

Part of the appeal, as with other Jewish internet ventures, is the savings. SecularSynagogue.com’s 66 members currently pay $18 a month — Netflix is $15.99 — though Handlarski says the cost will go up somewhat with its next cohort. Applied Jewish Spirituality, where Daniel Silverstein teaches, offers twice-monthly online classes on Kabbalah for $15 each when you sign up for a year. Compare that to synagogue dues, which could be thousands of dollars annually.

Yet even within the digital Jewish renaissance, there is skepticism that such online communities can meet a person’s complete spiritual needs. Indeed, it is not uncommon for internet-based Jewish communities to branch out into in-person events. The virtual “Kaddish Club” at Manhattan’s Lab/Shul congregation, for example, started as a once-a-week video conference for people who have recently lost a loved one to say the Jewish prayer of mourning. It became such a tight-knit community that it now takes the additional form of a once-a-month potluck dinner. Sim Shalom, an online synagogue, will host live jazz high holiday services in New York’s Greenwich Village in September.

Digital technology is best used as a tool for helping people feel more interconnected, but it cannot help us as meaningfully when we are in pain, or grieving, or want to share our joy, says Goldstein, of the Institute for Jewish Spirituality.

“Who’s going to hold us during those periods, and help us make sense out of it?” Goldstein asked.

Farkin, an unabashed booster of SecularSynagogue.com, struggles with that paradox. For Passover this year, the community hosted a seder on Zoom video conferencing, using a Haggadah created by its members. They signed in from the UK to Los Angeles, Mexico to Canada. It was BYO seder plate, of course.

“For me the seder is the most important ritual of the year,” Farkin, 55, said. “I felt that this was a celebration which I could feel very much at home at.”

Still, he added, he wishes he had a warm home filled with family or friends to go to on a Friday evening or Saturday morning.

“That’s the only thing I miss, really,” he said. “It’s difficult to kibbitz about the cholent when you’re only online.”