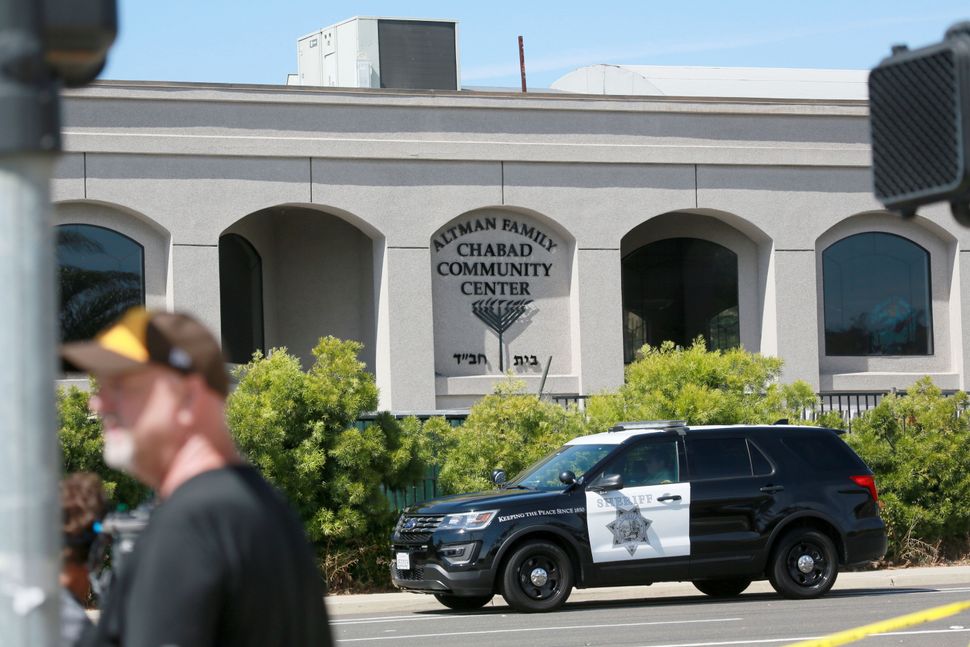 Police outside the Poway synagogue Image by Getty

The High Holidays are here. Synagogues will swell with their biggest crowds of the year on Rosh Hashanah and Yom Kippur. But in the wake of the Pittsburgh and Poway shootings in the past year, and amid a nation-wide uptick in anti-Semitic incidents, American Jewish communities are on edge.

What role can you, as a congregant, play to help keep yourself, your family and your community safe? How can you promote security while also showing the hospitality that is at the bedrock of Jewish tradition?

To compile some tips, we spoke to BK Blankchtein, a security consultant based in Baltimore. Through his security firm and tactical supply shop Masada Tactical, Blankchtein has trained dozens of congregations in Maryland, Virginia and Washington, D.C. over the past 12 years. He broke his advice into three main parts: be aware, have a plan and know how to respond to injuries.

Though Blankchtein’s job is to prepare synagogues for the worst possible tragedy, he says that the best way to prepare is to learn basic safety skills. For example, observant Jews who may walk to synagogue for the holidays should be mindful of their surroundings. Walking in groups is a good idea, as is letting family and friends know when you’ll be back if you decide to take a break, Blankchstein said.

You may see some new faces over Rosh Hashanah and Yom Kippur. But Blankchtein says that a few key traits to look out for in people you don’t recognize are general jitteriness, excessive-seeming looking about and visible sweating. If you’re greeting people by the door, look for solo congregants who are arriving with multiple bags, or an unseasonably large coat. Always remember to act calmly when dealing with a possible threat, Blankchtein said.

“We look at congregants as a force multiplier from an awareness standpoint,” he said, using a term that security and military experts use for factors or technology that increase the effectiveness of an attack. “If you look around and something doesn’t feel right, you should do something about it.”

It’s easy to be comfortable at your home synagogue. But High Holiday crowds frequently require synagogues to change their layouts, or widen the sanctuary area into multi-use rooms and social halls. “Familiarize yourself with where you are, what would be the best way to get out if you needed to,” Blankchtein said.

The back of a pew at a synagogue in Ann Arbor, Michigan.

My friend took and posted this photo to Facebook yesterday. It took my breath away. pic.twitter.com/qIOQdRecwS

Blankchtein has encouraged synagogues and individual congregants to make plans for where to meet up in case of an emergency. If you are coming with family, pick a place that is near the synagogue but far enough away to be out of the area of risk to regroup if there is an incident.

Get some medical training

“Everyone is thinking about active shooters, because that’s the big word right now,” Blankchtein says, “but I’m more concerned about medical emergencies.”

That’s because, he says, the majority of lives lost in active shooter situations don’t happen because the victim received a fatal gunshot wound: it’s because they were not treated adequately, quickly enough. Learning CPR and how to apply a tourniquet is the “biggest return on investment” for emergency preparedness, Blankchtein says. That way, congregants can learn to be prepared for the kinds of incidents that occur in synagogues much more frequently on the High Holidays: falls, heart attacks and dehydration.

Ultimately, Blankchstein says, his tips are about preparedness — or the first of the four Ds of security: deter, detect, defend, destroy. When a synagogue has appropriate security protocols in place, and a congregation that is trained to respond to emergencies, they are best positioned to discourage any would-be attacker.

“I’d much rather prevent it, and put my resources into deterrence,” he said.