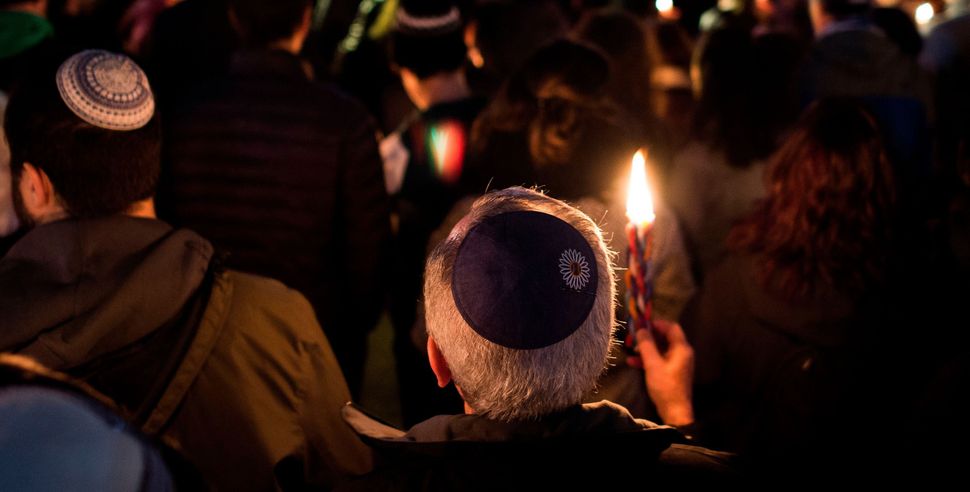 This Sunday marks one year since the shooting at the Tree of Life*Or L’Simcha synagogue in Pittsburgh, in which 11 people were killed. Anniversaries of deaths have great significance in Judaism. They are commonly called the _yahrzeit,_ a Yiddish word which simply means “the time of the year.”

Jewish organizations across the country have organized commemoration events to mark the day, and many synagogues are dedicating their Sabbath services on Saturday to the memory of the 11.

Yet the Pittsburgh yahrzeit is coming closely on the heels of an unusually late High Holiday season, and some communities have foregone planning their own events. Instead, they are promoting a virtual moment of silence, called “Pause With Pittsburgh,” which will give people the opportunity to tune into a live memorial service happening in Pittsburgh from their phones.

However, many communities are holding commemoration events this weekend.

Here is a list of commemoration events happening around the country this weekend. To have your local event added to this list, email Ari Feldman at [email protected]

Pause With Pittsburgh: The Jewish Federations of North America have created a virtual way to connect with other Jews commemorating the 27th: PauseWithPittsburgh.com. On the site, you can learn how to receive a text message to your phone that will link to a live feed of a commemorative gathering in Pittsburgh. Signing up for the service requires you to consent to sharing your email and phone number with JFNA and its more than 150 local affiliates, who may contact you about their other activities. Sunday, 5pm EST

#ShowUpForShabbat: The American Jewish Committee is leading a push to bring people to synagogue for the Sabbath before the yahrzeit. Click here to learn more about the initiative and see a list of participating synagogues. Friday evening through Saturday evening

A weekend of service and remembrance: The Jewish community in Pittsburgh has created a special website with listings for all the events over the weekend of the yahrzeit. It features clothing drives, service projects, memorial gatherings and prayer opportunities. All weekend

Day Of Action: Central Synagogue, one of the largest Reform congregations in the country, has organized a “Day of Action Against Anti-Semitism” in partnership with UJA Federation of New York, the Jewish Community Relations Council and AJC New York. Click here for more details about the events this weekend. Sunday, 10am EST

March in Midtown Manhattan: IfNotNow and Jews For Racial and Economic Justice have organized a Friday morning protest of white nationalism, starting at Bryant Park and ending at an as-yet-undisclosed location. Friday, 7am

Weekend of Service: Repair the World and Atara, a New York Jewish community, have organized a weekend of service in Brooklyn. You can help paint a mural, pack bags of food for those in need and build a shed at a community garden. Sunday, various times

Interfaith vigil: The Manhattanville Hillel, in Westchester County, is hosting an interfaith vigil that is open for whoever wants to attend. Sunday, 7:30pm

A commemoration: A group of Jewish communities will be joining together at the National Museum of American Jeiwsh History for a yahrzeit commemoration of the shooting. Sunday, 7:30pm

Praying in Unity: Temple Beth Or is hosting an interfaith prayer vigil, followed by a dinner, to commemorate the shooting. All are welcome. Sunday, 6pm

Action Against Hate: The Anti-Defamation League is sponsoring an event, at Congregation Shearith Israel, to teach people how they can combat hate in the United States. Sunday, 2-4pm

Commemoration vigil: The Chicago Jewish community will be holding a vigil at Buckingham Fountain. _Sunday, 4:30pm)

A commemoration: Repair the World Detroit is hosting a vigil at its offices, co-sponsored by a number of Jewish groups in the city. Sunday, 1:30pm

Remembering Victims of Anti-Semitism: The Anti-Defamation League is co-sponsoring this event, at a local synagogue, for a program remembering the lives of people killed in anti-Semitic attacks over the past year. Sunday, 7pm

Song circle: IfNotNow Austin will be gathering people at the Texas State Capitol building for a song circle in memory of those killed last October. Sunday, 5:30pm

Interfaith vigil: Temple Beth El, in San Pedro, is hosting an interfaith service in partnership with the local interfaith council to remember the victims of the Pittsburgh shooting. Sunday, 3pm